Friday I worked from home, which was quite the challenge because it involved sitting on the floor, using a coffee table as a desk, and directing Cameron on things to clean.  It was his last day in Washington and rather than doing something fun and memorable he was helping get the apartment for move-out (thanks Cam!).  His flight was around 6pm, but since Michelle (Cameron's mom) happened to be in SeaTac that afternoon, we elected to leave the house around 1:30 so we could visit with her for about an hour.

Cameron was clearly anxious, and I think the cleaning was a needed distraction.  Larry (Cameron's dad) called with his final farewell, and Cameron reported that Larry was a little irritated that Cameron seemed distracted on the phone. Of course he was going to have external focuses, Larry! Cameron was justifiably on-edge.  In addition to the last-day nerves he also ended up having to purchase a return ticket to the US, otherwise there was a chance Delta wasn't going to let him board his flight.  Although we don't have our visas fully taken care of (for which I am quite irritated at Remitley) we both assumed that the three month visa-free travel window was going to be ample time.  Delta, however, does not agree and requires that you return to the USA within 90 days if you do not have a visa allowing you an exception.  If all goes poorly, Cameron will be in LA October 30th scheduling visa appointments with the US Consulate.

Work was not a strong enough distraction for me to keep my nerves in check.  Logically, I know I shouldn't be sad about missing Cameron since he's the only person I'm guaranteed to keep seeing day-to-day, but the upcoming two weeks apart are full of lots of stresses that neither of us want to face alone.  In between work-tasks there were lots of hugs and occasional tears.  Finally at 1:15 we packed the car with Camerons things (one large suitcase, a carry-on, and a backpack) and our coffee table (the last piece of furniture which we dropped off at the ReStore), and left.

The Red Lion near the airport was nothing special.  The lobby played 90s music that was well-paired to the era of the decor.  Michelle had a large double queen room and we managed to create a small talking circle using the desk chair, sofa chair, and one of the beds.  The three of us shared our worries about the future and memories of our May wedding, but we avoided as much as possible topics that might lead to tears.  We did pretty well for the bulk of the hour, but goodbyes are hard, especially when being wished well by someone who gifts you homemade cookies.

I did relatively well keeping my tears to a consistent trickle with minimal sobs in the short drive from the hotel to the airport and during the good-bye hugs to Cameron.  I surprised myself with my ability to continue to hold it together for the 30 minute drive back home (only two radio songs sent me to tears) so I decided to go into the office to finish off the day.  It was also easier to talk myself out of going back home, knowing that I didn't have a surface to set my laptop up on, other than the floor.  I worked until 6:45, partially because of the upcoming 9/30 deadlines, the number of people who wanted to chat at work, and because I didn't have anything to entice me to go home right away.  I left when I was hungry, helped myself to a microwave meal while calling Mom, and then Ella and Cole picked me up at 7:30 for Mikki's birthday party.

I've found myself involved in many drinking-based events in the past two weeks, which make very good distractions.  That is, of course, until it's time for the goodbyes.  Goodbyes are the saddest parts of moving, and I think crying helps me to solidify the momentousness of each farewell. I sometimes like to wallow in my sadness and think about the goodbyes which we did not know to be the last goodbyes.  Another thing that keeps the tear flowing is thinking about all of the memories that I will never be able to conjure up again because I have now given away the physical objects that would trigger those memories.  I like to sit with these sad thoughts for a few minutes, and then get myself back to positivity by thinking about all of the memories I will get to conjure into re-existence once I get the chance to walk around my childhood town, Weinheim, Germany.

Leading into this weekend I had been complaining to people that my last weekend in Washington was going to be spent out-of-town on a work trip.  While that was technically the case, it turned into a girlfriend getaway for me and Ella.  We left around 11am on Saturday morning to embark on a four hour drive to Skamania Lodge along the Columbia River in southern Washington.  Once there, we enjoyed a lunch with a view of the river, went on a 1.75mile hike followed by a 1mile run on a fitness course loop.  We did some light shopping at the resort gift shop, drove into town for cheese and wine, and had an evening soak in the outdoor hot tub.  Other than the 30 minute presentation I had to give on Sunday morning it was more of a vacation than a working weekend.  The only true downside to the weekend get-away is the reduced time I have at home to finalize all of the moving details and to finish up cleaning.  It probably wouldn't be a problem, except I have to be in Olympia for the next three days of work, which means more hotel rooms and no cleaning time.

As I write this, Cameron has been in Krakow for about a day.  From the two brief phone calls we've had I know that he played Stardew Valley and watched Pokemon Detective on the airplane, his Uber driver from the Krakow airport helped him buy a SIM card for his phone and then offered to be Cameron's first Polish friend, he's suffering from jet lag, and he was able to buy some light groceries at the neighboring convenience store.  I know that if I let my mind wander I will start to overly-fantasize about what my Polish life will be like, so in order to keep my expectations realistic it is probably good that I have the distractions of work and cleaning to keep me in check. 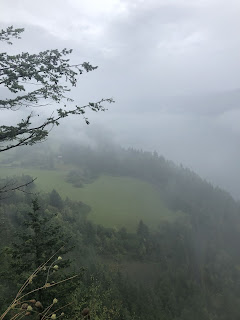 A foggy look down to the Columbia River 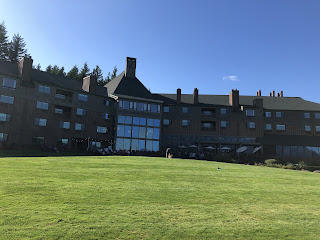 The back lawn at Skamania Lodge 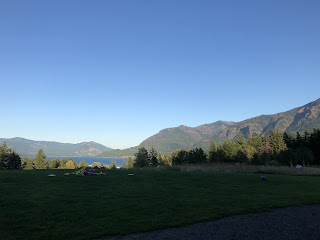 View of the Columbia River from Skamania Lodge 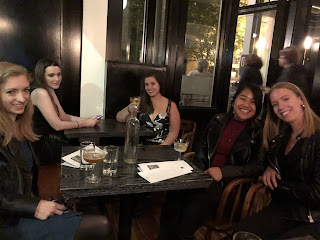 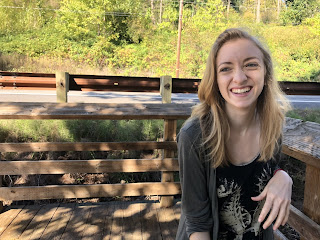 A stop on the drive with Ella 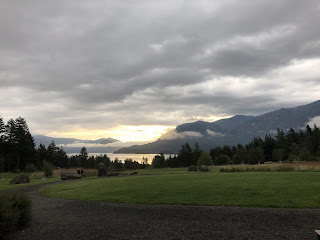 Morning view from the Lodge 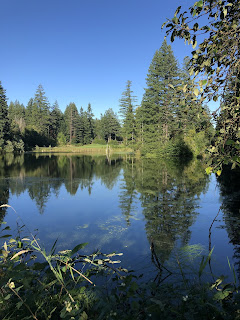 View from our hike