It has been a very social week for me; every day I have met up with at least one person. You could say I'm living my best housewife life.

On Saturday my friend Kriti invited me on a bus trip to some Slovakian thermal baths–a real treat, especially since we were hanging out with her Polish mother-in-law and five of her retired girlfriends. Even though I didn't understand what was going on around me a lot of the time, I could  tell this was a group of ladies that know how to have fun. Although my friend and I were the youngest on the bus by at least 25 years, we definitely could learn a few things from the other tour-takers about how to party. Not only did the whole bus unload for a pit-stop at a Slovakian liquor shop, but everyone was strongly encouraged to take a shot of cherry liquor before getting back on the bus for the trip home. When I told my friend that I can't wait to be retired, she pointed out that I basically already was since I wasn't working and was already hanging out with the retirees.

Bumble BFF has been going well, and I regularly match with other women in their 20s who are new to Krakow. I don't have a way to compare friendship online dating to traditional online dating, but overall I've been disappointed in the lackluster commitment in my conversations with most people. But there are still some hidden gems! On Monday, I had my second in-real-life meetup with someone from the app. Clara, a French woman who moved here with her Polish boyfriend after living in Japan for a year, just arrived in Krakow last week. We had lunch at a not-very-Mexican Mexican restaurant followed by some Portuguese custard pastries. I think she was happy to have someone sharing brand-new-to-Krakow advice and I enjoyed having information to share. With any luck, we'll be meeting again next week.

After lunch I had to rush home to change into my running gear because I had a speed-walking date with another woman I met through the "Girls Gone International" Facebook group. As we hoofed it around Planty Park and along the river we talked about traveling and the importance of having a social life. Saba also isn't working but I got the impression she had sought-out the housewife life a little more deliberately than I had. During this one-year move to Poland, she and her husband are hoping to visit virtually every European country and have already hit 10 or 12 in their first four months. She definitely seemed like someone who likes having a purpose (planning trips, organizing women's meet-ups, and walking with a purpose) and she was quick to give me suggestions on how I could entice Cameron to travel more with me. Although I'm not on her level yet, I could see myself after a few years of not working stepping into her shoes as a primary organizing force for international women.

Tuesday afternoon, Anna, the woman who had introduced me to the rabbit shelter, invited me to her flat to drink tea and meet her rabbits. I was very excited to meet the two fluff-balls that she posts on Facebook all of the time, and was so touched that someone whom I had only met once was willing to let me into their house. Over the course of two hours we talked about rabbits, books, and what demands we put on people we are in relationships with. It was reassuring to hear someone else say that we need lots of friendships so that we are not overly-reliant on just one person. In our first month here, I know I was overly-reliant on Cameron, but I'm hoping that some of that socialization-pressure is receding now.

This week has also had the now-standard interactions: my weekly Toastmasters meeting and joining people at the rabbit shelter. We're also in the process of registering the car in Poland which adds another layer of demands and chores. Wednesday was so full that I was ready to make instant ramen noodles for dinner! Luckily I talked myself out of that, because if I start succumbing to microwave dinners now what will my life deteriorate to once I start working? But you've already ready about my staying-busy woes.

Within my new-found social network, I've realized that I am an ambassador to the United States. My new friends are from everywhere except America it seems: Poland, India, France, Dubai, Russia, Pakistan... It's clear to me that the group I've found myself in is made up of strong-minded, confident women who lean heavily in the "feminist" direction. It makes sense, since I think it takes a fearless self-assured person to agree to meet a stranger whom you've only briefly talked to over the internet. Breaking it down to that simple logic makes it sound absurd that I keep agreeing to these meet-ups, but me and all of my new friends and acquaintances agree that Krakow is so safe. When you search Google for "safety in Krakow" one of the only recommendations is to be mindful that there are horse-drawn carriages around Old Town. Although we all agree we would only do this sort of meet-and-greet in Krakow, I get the impression that most of these women would have the same chutzpah no matter where they lived.

Perhaps it is that excessive self-confidence that has led to a number of people to ask me to set the record straight on American stereotypes. Often, the inquisitor starts with something mild, like "is it true you need a car to live in the US?" As a once-aspiring diplomat, I always caveat my response  saying that the US is a big country with lots of different sub-cultures and that I can only speak from my experiences, which have mostly been in liberal cities...but yes, most people would agree that having a car is essential and that's why the driving age is only 16. After a little conversation about how that person would never want to live somewhere that was so walking-adverse they move into the next question.

We often go through a variety of topics: why Americans are fat, how dependent Americans are on their laundry dryers, that American's don't travel, and why Americans need to flaunt everything, even their dish washer and refrigerator (unlike the European ones which are smartly camouflaged into the kitchen cabinets). Presumably, after I've proven myself to be sufficiently trustworthy and open-minded I get thrown a zinger. Lots of them circle around racism and sexism, however my favorite has been "is it true that child marriage is legal in the US?"

Another common topic that comes up are women's opinions of men. I'm sure Cameron would hate knowing everything I share about him to these near-strangers but it is all part of the initiation process. A common bonding topic is pridefully complaining about how much better we women are at meeting people, making plans, and coordinating schedules. I've been recommended by multiple women that we set up a "play date" for our male partners. I think that most of us are here because of our partners for one reason or another (mostly their jobs or their family and citizenship) and we want to prove that we still are powerful and have control over our lives. Also, feminism has a lot of momentum right now and even though many of us are committed to traditional heterosexual relationships, we want to prove that we are allies for the good fight and get reassurance of that during these one-on-one mildly taboo discussions. It's come up so regularly that I started to second guess if I'm worthy of being part of these conversations, but after taking a quiz from gotoquiz.com I was assured that I am a "full blooded feminist" even though in some instances I'm "being held back by society's constrictions."

I'm a little amazed by how many like-mined open people I have found, despite the numbers cultural backgrounds at play. Although Poland as a whole has conservative-leaning politics it seems Krakow has harbored a safe space for outspoken liberal 20- and 30-somethings. I'm also quite smitten with how diverse of a friend group I'm developing and am starting to get more comfortable asking people about their culture and family beliefs. I'm learning so much about the world! I used to think that I was fairly worldly, but I realize I was only comparing myself to car-dependent non-traveling Americans. 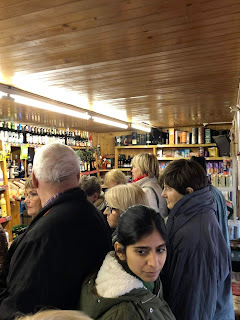 The Slovakian liquor store crammed with all of the Polish bus-riding tourists. 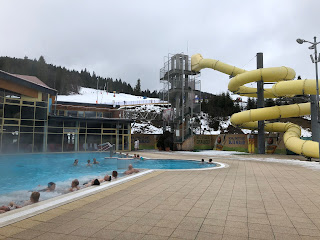 Looking over at the ski slopes from the thermal baths. 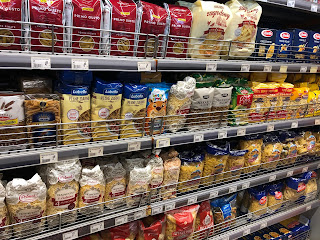 There are so many more varieties of pasta shapes here; this is only half of the aisle! I know there's no mention of this in this week's blog but I find it generally delightful. 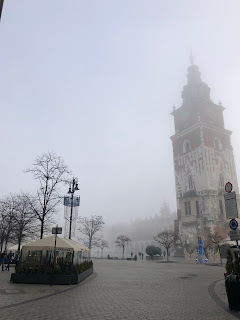 A foggy morning in old-town. 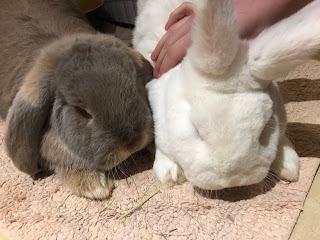 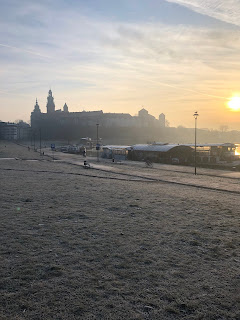 Morning frost along the river.