Drinking with the Locals

It's probably no surprise to you to hear that Polish people like to drink. Wódka is the national drink, but from what I've seen beer and wine are still the common daily drinks. One of my favorite things to see is people setting out for an adventurous day (hiking or kayaking) and enjoying a beer at 9:30 in the morning.

That being said, drinking is done socially. I had five friends over Friday night for a wine night and quickly learned that it is bad luck to pour refill your own glass. Of course that led to jokes about the disadvantages of living alone and lots of people making it very obvious when their glass was empty. Looking back, I think this is also why no one accepted my offers of drink and food until the full group arrived.

This was marketed as a wine party, but I still was surprised when everyone brought a bottle of wine, plus I already had two. Seven bottles of wine for six people seemed excessive, but over the course of seven hours we got through six and a half of them– o boże! Only one of the seven bottles was a dry wine, everyone else brought sweet or semi-sweet. Of the seven, five of them were red. Despite this, I was asked to put all of the bottles in the fridge. Maybe it's just my lack of wine education but for now I shall think of chilled sweet red wine as a Polish thing.

As we drank, we also ate, and sang, and cheered– "na zdrowie!" We cycled through party music from Poland, Ukraine, and Russia as we drank Georgian, Modovan, and German wine. Food wise, I made spanakopita (which my friends kept referring to as spinach baskets) and Cameron had baked cream puffs, which were of course a big hit. He only got to enjoy a few though since he had been banished to a bedroom during this time, but that didn't stop him from periodically texting me for things or to remind me to keep quiet. It wasn't a problem for us, but I actually have since learned that there is a noise curfew at 10pm; luckily we didn't hear any complaints from neighbors!

Overall, I feel very pleased of myself. I'm now officially in my late twenties but there was no hangover for me; I think that might be a sign that I am officially welcomed by Poland. 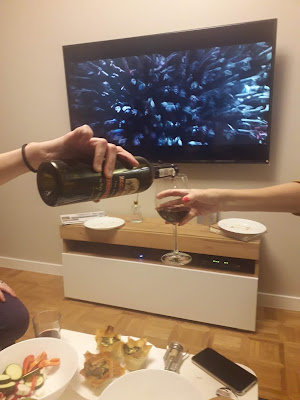 Never pour your own wine! 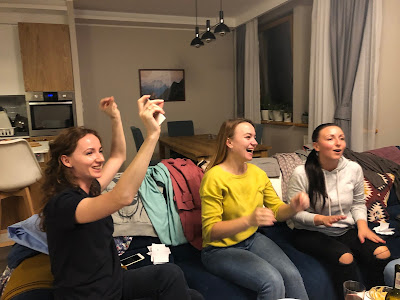 Singing and dancing to some well-known Polish party song that I've never heard of. My favorite new song of the night was My Słowanie. 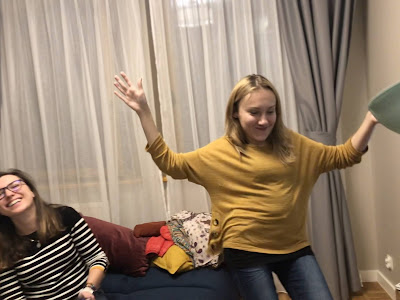 A game of fishbowl always makes its way to my parties. 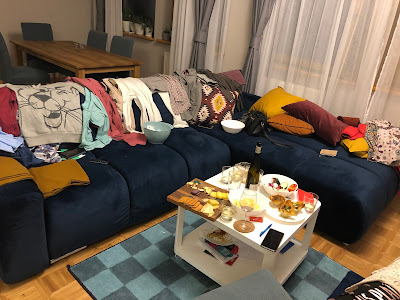 The reason there are clothes all over the couch is because we also had a clothes exchange. I'm going to another swap meet today because I've realized I have way too many things. Hopefully I leave with less than I walk in with.