Gosh, was it only this Monday that our car got picked up for shipping? It feels like months ago, but now that means we only have a few months to go. I'm not sad or disappointed, but I feel like the next two months are going to go by in a whirlwind.

For our last day with the car, we went to Auschwitz. I wasn't particularly excited to go (I mean, it's not a place known for having a good time), but I felt obligated to. The former Nazi concentration camp surrounds a town that is about 1.5 hours west of Krakow. The town of Oswiecim is like any other Polish agricultural village, except for the massive busloads of tourists that regularly drive through. I suppose the area is historically known for large deposits of people who spent too long in sweaty crowded vehicles.

Ok, that was a bad joke...but some of us use comedy as a way of dealing with horror. It was not so horrible, though. Everything about the organization at the Auschwitz-Birkenau Memorial and Museum was thoughtful, tasteful, and respectful. It started with a ten-minute video (voiced by Mark Hamill) with beautiful dual photos overlaying historical images on top of modern ones. Then we met our tour guide for three hours spit between Auschwitz I and Birkenau (Auschwitz II).

Our guide was great! Of course he was incredibly knowledgeable about WWII history, but he was very good about pointing out the stories and humanity behind each photo and location. For example, in one black-and-white photo on the unloading dock, you see the groups of men and women grouped up separately, a few SS officers, and someone in the center of it all walking around in his socks and looking a little bewildered. Our guide called out the others in the crowed who were gawking and smirking, implying the transports weren't panicked or overly stressed about their destination. He then of course reminded us that most of them were in the last hour of their lives.

The stories were humanizing, but the piles of human hair were tragic. It was the only space we were not allowed to photograph, in respect of the human remains, but it was enough hair to fill my apartment. In other spaces we saw equally overwhelming piles of shoes, suitcases, kitchen appliances, eyeglasses, and prostheses. And of course, it's difficult to hear about the gas chambers without feeling disgusted, but our guide always had a diplomatic way of focusing our concerns.

He had a habit of reminding us that yes, the Holocaust was 80 years ago but there are still tragedies that are happening in our modern world. People are still equally capable of buying into an ethics system that leads to genocide. Tribalism is real—just watch the newest season of Ru Paul's Drag Race.

I am so glad I went to Auschwitz. Not only was it interesting and educational, but it was also inspirational. Some people might think of this place as a one-time visit, but I would happily go back again and again. There is so much more to see (the place is 40 km2) and so many more stories to tell. If you get a chance, I highly recommend visiting. 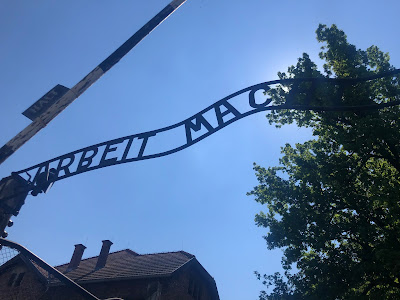 The message "Arbeit Macht Frei" helped to subdue the prisoners, making them think that they were arriving at a long-term work camp. For some it was a work camp, but it wasn't long-term for anyone. 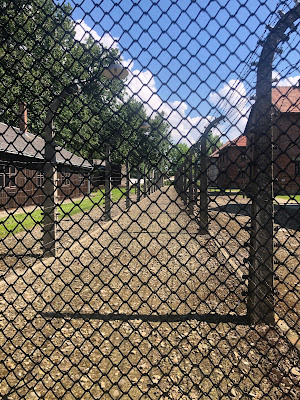 The space was unexpectedly beautiful and peaceful, except for the rows of barbed wire fences everywhere. Our tour guide also noted that it would not have looked so green when it was occupied; the grounds would have been muddy and crowded. 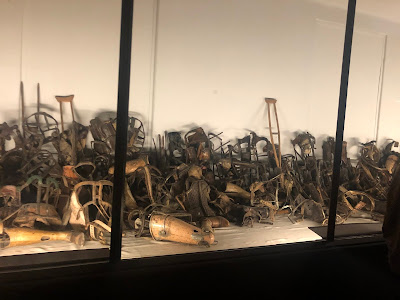 A visual representation of how disabilities were viewed. 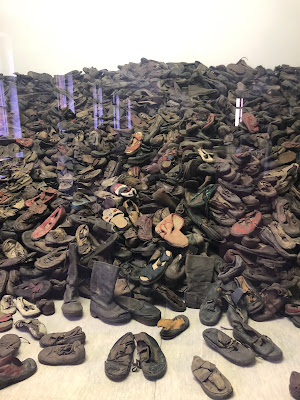 This is only about a sixth of the total pile. Now imagine the same volume, but with human hair. 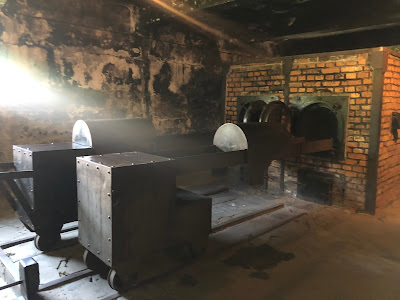 The ovens inside one of the crematoriums. 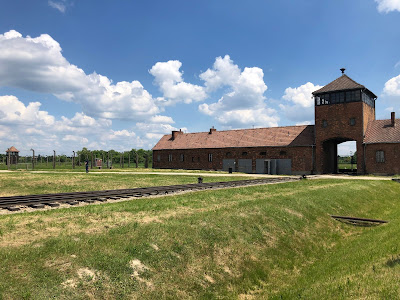 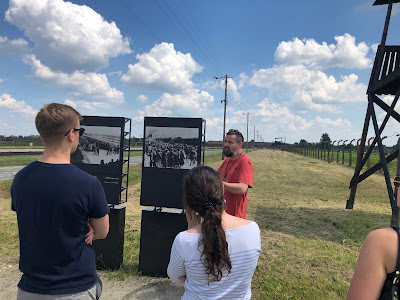 This is the photo I described, above, cleverly placed in the spot that the photo was taken from. 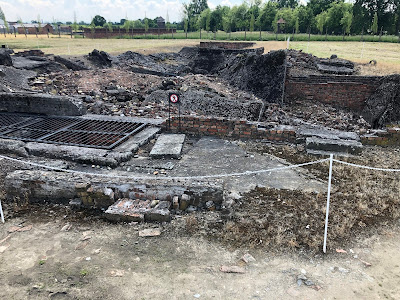 The destroyed remains of a gas chamber. 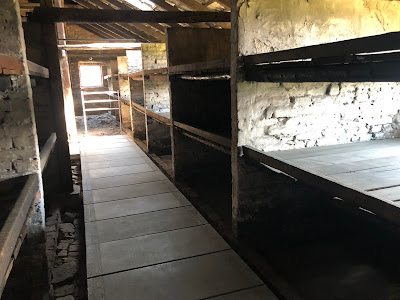 We got to be the first tour inside one of the newly renovated structures. Each of these infirmary beds used to sleep 4-7 people.