Waiting for Visas in Seattle

It is Thursday, November 14th and we are finally back at SeaTac airport waiting for our return flight to Europe, albeit four days later than our original booking.

The plan for this trip had been to wait in Seattle for our residential visas to be processed. We thought that 12 days would be sufficient, since the standard processing time is 1-2 weeks, we paid for expedited processing, and Cameron's coworker, Mike, had gotten his visa back within a week. We apparently hadn't accounted for the delays of processing two visas, the fact that my application was not as clear-cut because I don't have a work permit, and the two Polish holidays sprinkled into our 12 day timeline. 12 days is already a lot of hotel time, especially when it's been coupled with two days in LA, but it is really draining being in purgatory with no way of knowing when the wait will end.

The first ten days was fairly carefree. We saw at least one friend every day (typically for lunch or dinner) and enjoyed staying in a nice hotel (the W) in downtown Seattle. It was my first time spending any significant time in downtown Seattle, and the hotel was just one block away from Cameron's office so he knew all of the local lunch spots. While Cameron went to work, I typically worked out in the large hotel gym for 1-2 hours, walked around the surrounding streets, and found touristy ways to occupy myself. Despite going out as much as possible, I still found myself in the hotel room a decent amount reading, watching American TV (mostly TLC, the Food Network, and Ellen), and attempting to crochet mittens.

As we approached day 9 we started to get nervous. Cameron attempted to call the Consulate but had to leave a message since it was after (their very limited) hours. Nothing came in that Thursday so I tried to call again on Friday during office hours. The automated voice laid out four options. I started by selecting "visas" but the phone went dead shortly after. I called back and tried "visas" again but got the same result. I called back twice more and tried different options, but each time it would ring for about a minute and then hang up on me. Cameron emailed the agency but we didn't really have any hope of getting a response until Tuesday due to the weekend and Monday holiday (Veterans Day in the US and Polish Independence Day). The visas still hadn't arrived by end-of-day Friday so Cameron borrowed a mail key in hopes that they would be delivered to the office on Saturday and we would still catch our Sunday flight.

After Cameron got off of work on Friday, we bussed to Cole and Ella's house in Issaquah. Cameron and Cole were working on one of their many projects and my intention was to drink wine and watch a scary movie with Ella and Mikki. The scary movies was replaced with Don't Tell Mom...the Babysitter's Dead but the wine consumption was in full force. We upgraded to a Lyft instead of bussing home, but we didn't walk into the hotel until about 11pm. While Cole and Ella consider popcorn an acceptable dinner, Cameron and I do not so we had a late night dinner in the hotel bar, Trace. I went to sleep immediately thereafter, but Cameron attempted to stay up to let his sister, Emily, into the hotel room once she got in from Nepal that night. I slept through the whole thing, but learned in the morning that Cameron also fell asleep which led to some hoopla with the light rail, sleepwalking, and sleep talking.

Emily apparently hadn't slept all night due to jet lag, so she was happy to join me for an hour-long workout while Cameron continued to snooze. After showers and badgering Cameron awake, we went in for a Remitly breakfast, meaning that Cameron took us to his office for coffee, yogurt, cereal, chocolate-covered almonds, carrots and hummus, granola bars, and whatever else from his office that seemed appetizing at 8am. Filled up, we walked down to the ferry terminal so we could meet the rest of the Little/Engel family for brunch and I could meet Grammy June for the first time (for a 90-something-year-old woman, she is a delight!).

Our return ferry got us back at a perfect time to check the Remitly mail one more time. The ferry ride had been one of the more interesting one's I ever had. For one, we looked like crazy people sorting through a huge pile of mail that Michelle had passed off to us. Secondly, we got to enjoy opening some early Christmas gifts from Cameron's family. Most importantly, though, the captain took a short detour so that we could watch a pod of orcas off of Bainbridge Island's coastline. The whales were too far away to see in detail, but the shape of the dorsal fin was indicative of their species and we could tell there were a lot of them–probably at least six. I had never seen orcas before, in the wild or otherwise, and Cameron was pretty sure this was only his second-ever sighting.

The passports did not show up in the mail, which meant a series of rebookings needed to happen. We decided it wasn't too unreasonable to hope that they would arrive by Tuesday, allowing us to fly out on Wednesday. Unfortunately, because of Sunday's MLS cup, the W didn't have any capacity and wasn't able to extend our stay. Go Sounders, but bad timing for us. Luckily, we were able to move up to the Kimpton Hotel Vintage just a block away. It was cheaper for Cameron to rebook our flights rather than to flat-out cancel them and then buy new tickets laters, so we were booked for the same flight schedule for Tuesday. It was still an expensive rescheduling, but thankfully Remitly was charged with the bill and planned to have their lawyers call the Consulate on Tuesday if our passports still had not arrived.

It was stressful to be stuck somewhere waiting for visas. We are lucky that our holding zone is a city we are familiar with, that has lots to do, and full of people that we love. As far as visa problems go, this was the creme de la creme, and although we continued to remind ourselves of our idealized situation, we were both anxious. Since there was nothing else to do, we went with Brad to Chihuly Garden and Glass, did a 5km run with Ella in Coal Creek area, and I did a second lunch with my old coworkers. At the end of lunch that Tuesday I got a call from Cameron saying he had been in contact with the Consulate, the visas were issued but our passports had not yet been mailed, and that we should get our passports the next day, Wednesday. That meant we had to rebook our flights for Thursday, extend our hotel another night, and cross our fingers that one-day FedEx shipping truly was only one day. If not, we would have to cancel our upcoming Saturday flights to London and do the rescheduling process for our Krakow flights a third time.

After breakfast on Wednesday Cameron went to work and I went for a seven mile walk along the Seattle waterfront. Every so often I would think this could be my last day in Seattle but I would quickly disregard those thoughts–I didn't want to jinx it! I got back to the hotel around noon and within twenty minutes I got a picture from Cameron holding our passports open to the "Wiza" pages! Oh what a relief! Our visas are the same type of visa, except Cameron's is issued under Article 06 (for the purpose of carrying out work as a foreigner) and mine is issued under Article 23, which is essentially the "other" category. I don't think this restricts my ability to work, but we will see. For now, a copy of my visa has been sent to PWC so they can hopefully begin to process a work permit for me.

Due to the time difference, we will be arriving in Krakow at 11am on Friday the 16th. I'm relieved for this trip to be over, but as soon as we get home we need to unpack and repack since we leave for London at 6:45 on Saturday morning. My guess is that we will be so tired from traveling and jet lag that we will be ready to fall asleep by mid-afternoon and will naturally wake up at a perfect time for our early-morning flight. I'll look forward to getting back from that trip and re-settling into our Polish routines. This has been a nice, but exhausting, trip. Hopefully the annual visa renewal process goes smoother!

Whenever people used to visit us in Seattle, I never had good recommendations for what they should do. Now that we don't live there anymore, I have lots of suggestions.
A few touristy highlights:

My favorite restaurants of the trip: 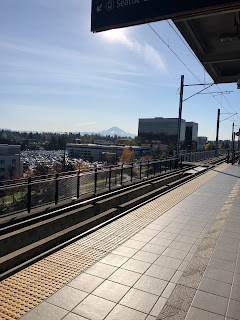 View of Mt. Rainier from the SeaTac light rail platform. 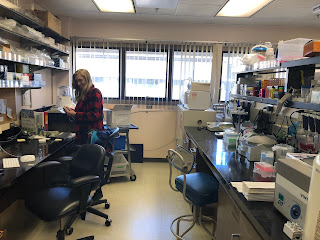 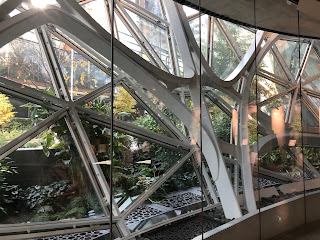 Inside the Understudy at the Seattle Spheres. 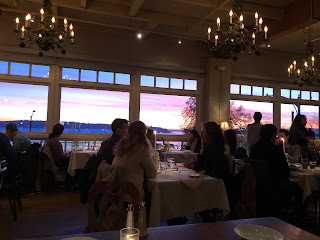 Sunset over the Sound from inside the Pink Door. 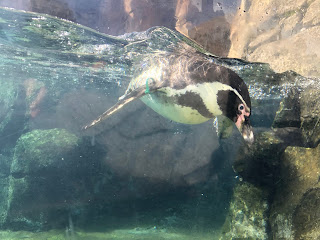 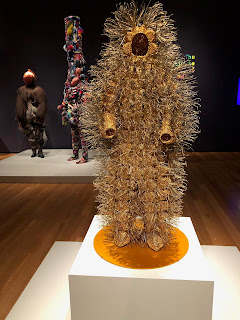 Some of my favorites at the Seattle Art Museum. 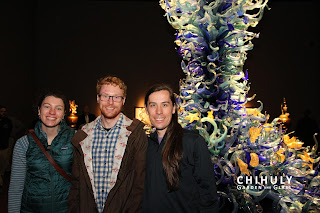 Chihuly Gardens and Glass with Brad. 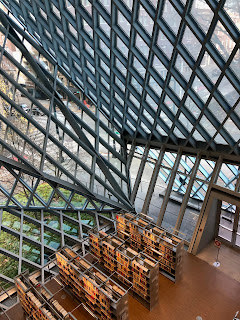 Inside the Seattle Public Library.