Although it seems like I've already been in Kraków for months looking back I've only spent three weekends here. That's just six days where it is acceptable for a healthy twenty-something to be aimlessly bopping about town rather than being at work. In Seattle, weekends were for socializing; they were the days to rotate between my non-work friends, go on hikes, meet Cole and Ella for Menchies, and running errands. Now all of my errands are done during the week, we can eat ice cream whenever we want (although I haven't seen any frozen yogurt), and we don't have any friends to socialize with. Although it might be corroding our relationship, Cameron is the only person I have to interact with so weekends are Aisha's-allowed-to-be-needy time.

Luckily for Cameron, with such a big beautiful city to explore we haven't had any trouble finding things to do together. We're slowly working our way down from the most touristy activities to more local's only spots.

Cameron works very close to HistoryLand. The exterior is a yellow stone building that would look grand if it weren't located right next to the shopping mall, however due to its surroundings it could easily blend in as a government hub or part of a satellite university campus. Cameron, however, had keyed in on the window ads promising to inform visitors of Poland's history via Legos, and as a Lego enthusiast he was keen to go. I assumed that the Lego history component was a rotating exhibit, but upon walking it it was clear that was the sole attraction. It was also clear, based on the other patrons and internal gift shop, that the museum was designed for kids and families. With only a modicum of shame, we paid for our tickets (about $10 each since we added the English audio guide) and crossed into the world of Lego.

Cameron was enthralled right from the first display. Had it not been for the length of the audio recording keeping us at the early-settlement model I would have kept walking after about 20 seconds, but in the minutes we spent at that first exhibit I started to see the little cheeky add-ins that Cameron loves so much about Legos. Outside of the settlement there were some Lego people swimming, someone was taking a nap on a partially-constructed roof, and a herd of cows were congregating in a way that seemed to displease their owner. The next display was the Battle of Grunwald, which had soldiers hanging out of trees and men who had fallen off of their horses. The battle was dramatized with a 360° video surrounding the battlefield.

We moved out of the Middle Ages to the 17th-19th centuries, represented by the construction of many still-standing iconic landmarks. There were battles by sea followed by battles by air. The final exhibits were recent history including World War II and a 1970s labor strike. Each display was accompanied by an interactive component, such as a Guitar Hero-style trumpet game and a virtual reality fly-by of a prominent cathedral. If I hadn't had to contend with all of the children I could have stayed and played Trumpet-Hero for hours! As an adult, I was amazed by the architectural intricacies and the coordination of the displays, light, and sounds to make all of the models come to life. It was great, especially if you are a 10- (or 27-) year-old Cameron.

The next day, we planned on going on a two-hour free walking tour. I had quite enjoyed the one I did of old town by myself, and would have happily done the same tour for Cameron's sake, but we elected going to Kazimierz, the historical Jewish district/ghetto. Probably because it was the weekend, this tour group was much bigger yet not as social. We tried making small talk with a few people in the group as we trekked along, but most conversations fizzled out pretty quickly. One exception was two Canadian women who also sampled some sulfur-tasting water that our tour guide informed us was the elixir of youth from Polish legends. I'm ok aging alongside everyone else to avoid drinking egg water, but it did lead us to swapping visa-woes and political concerns with the England-residing Canadians.

Our tour guide reinforced the wide-spread information that Kazimierz is the best place for night life, however he also paid respectful homage to the sad history of the district. A big part of the tour was focused around Steven Spielberg's Schindler's List and comparing it's depiction of Mr. Schindler to the real Oskar Schindler. The film was all shot in Kazimierz (not a staged set) so our guide pointed out a few of the well-known backdrops and he identified which apartment Spielberg lived in during filming. He also pointed out the old residences of other famous people and about the real-life stories that influenced parts of the movie (like that the girl in the red coat was based on  Roman Polanski's cousin).

The tour ended at Ghetto Heroes Square, a concrete plaza filled with 60+ metal chairs memorializing the murdered former residents. To compliment the somber finale, our tour guide asked us to not disrespect memorials such as this one and Auschwitz by taking selfies or proposing marriage in a gas chamber. Our guide was available to recommend restaurants, transportation back to old town, and ways to continue our historical education, but we were set on heading home.

As the tour dwindled to an end we started talking to Paulo, who we learned had also just moved to Krakow at the start of October. Since he was walking back the same way as us, we had about 20 minutes to learn about his move to Brazil, the challenges he was having moving his two cats, and that he was worried about moving his wife and son up in December since neither of them have ever seen snow. Our route back was not very systematic, but it did take us over a bridge decorated with acrobatic sculptures at sunset and we peeked our heads into the Pinball Museum. I hoped our route might have taken us back to the Kazimierz square where they were selling huge baguette pizzas, but alas the fates were against that plan.

The next weekend we were graced once again with sunny weather, but we didn't have a ton of opportunity to enjoy it on Saturday since at 15:00 we had a handful of people (some of Cameron's coworkers, their significant others, and Paulo) coming over for a parapetówka–our housewarming (aka windowsill) party! True to form, I had over prepared food for the number of expected guests, and since Cameron could only find a 30cm pie dish he was baking a double-sized apple pie. We received some unexpected housewarming gifts, including some lemon tarts to add to the already excessive spread. Since we only had acquaintance-level relationships with everyone there, conversations were a little slow going, but between beer, me lightly ridiculing Cameron, and a round of fishbowl people seemed to loosen up and have a good time. In my opinion it was a very good warm-up party! Of course we had to send people home with leftovers, which they were reluctant to take until I insisted that we were leaving the country for two weeks and wouldn't have a chance to eat them ourselves.

After eating a breakfast of leftover pie and lemon tarts and packing our bags for our upcoming visa-trip to LA and Seattle we set out for another weekend adventure. Larry has been persistently asking Cameron about a kayak slalom course outside of town, so we thought we might be able to take the electric scooters there. Cameron knew the excursion was a little sketchy since we would be weaving in-and-out of the scooter-allowed zones and since the ability for the scooters' batteries to get there and back was questionable. Regardless, we downloaded the Bird app, found two working scooters, and scooted off.

Almost immediately I noticed the scooter slowing down mid-way across the bridge. I worried the scooter's battery was already dying or that the motor would turn off because we were entering a no-go zone. Before we had time to figure it out, the scooter started zooming up again and we were over the river! The river trail was frequented by pedestrians and bikers, but we didn't see anyone else out on scooters that day, which made me worry we were disobeying the rules. We would have a few minutes of speedy riding and then a minute or two when the speed would decrease so much that I had to assist it by pushing (like a real scooter- ugh!) We eventually gave up when my scooter started beeping obnoxiously and we couldn't figure out why. Thinking it was a zone restriction (even though Cameron's wasn't yelling at him) we got the scooter back to a safe space and decided on Plan B.

Now on foot, we set off to a lake that previously had been an old mining quarry. The 20 minute walk was surprisingly industrial, but we ended up down a residential street that spit out at an ice cream truck and colorful forest. Always one to judge, I was surprised by how well dressed people were; I saw skirts, ballet flats, and button down shirts. The loop around the lake is only about 2.5km and relatively flat, but I was still working up a sweat and would not have wanted to be wearing real clothes. The entirety of Zarkzówek Lake is surrounded by chainlink fence, yet very few people stuck to the designated trail. Cameron commented on what nice families we saw helping their children break through holes in the fence! There were also signs prohibiting swimming, although that rule was also being ignored. The vivid blue water was was very inviting and I would have also liked to jump in if I wasn't concerned about breaking laws in a foreign country.

By the time we got home we were both very hot and tired of our unexpectedly long walk. Despite it being late October, it has been very warm with temperatures in the 20°s, although the forecast was predicting the first snow to happen either November 1st or 2nd. We however, will miss it for an upcoming trip to LA and Seattle to deal with visas–huzzah! 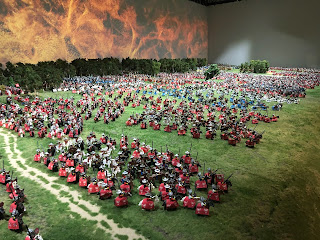 The Battle of Grunwald dramatized with deathly flames in the background. 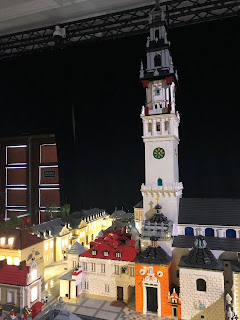 Lego constructions of a bell tower, monastery, and surrounding town. 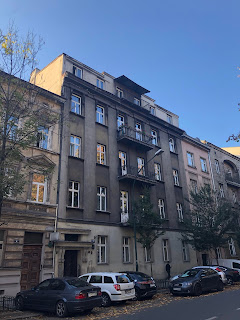 Oskar Schindler lived on the third floor. His apartment is the middle one with the flowers on the balcony. 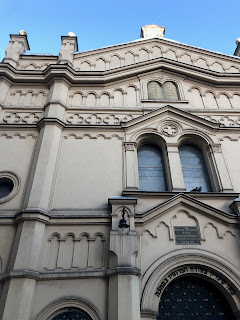 A progressive Jewish temple. Our tour guide pointed out that it only had one main entrance because both the men and women attended the same service. Yiddish writing above the gate to another temple. 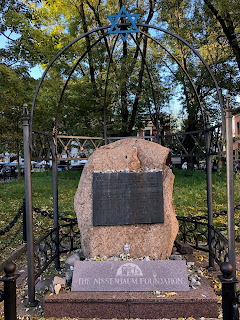 A memorial for former residences of Kazimierz. Apparently it is customary to place a stone at a memorial or gravestone rather than flowers. 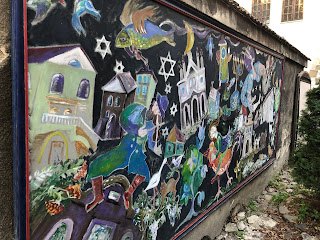 Some art encountered on our tour of the Jewish district. 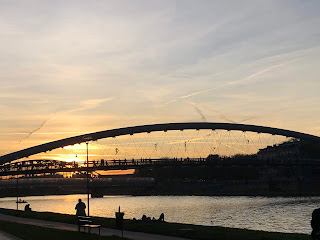 The bride with the hanging acrobatic figurines. 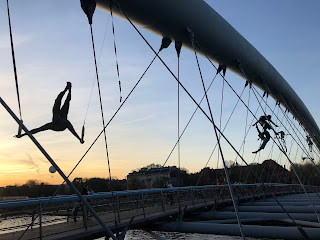 A close up as we crossed the Vistula. 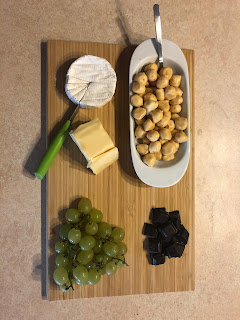 Trying to be fancy for our housewarming party. 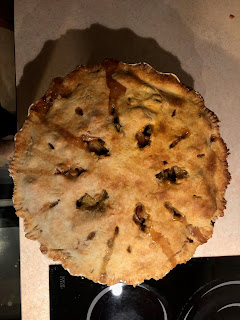 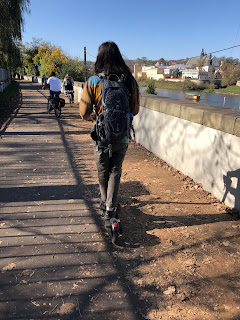 Scooting along the river. 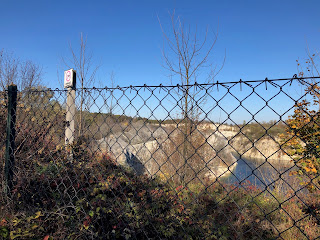 Chainlink fence around the lake with a sign saying no swimming and no cliff jumping. To jump from here would be at least a 30 foot fall. 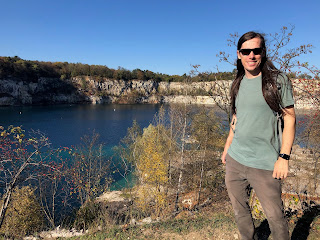 Very tempting blue water at the filled-in quarry.
Posted by Aisha at 8:16 PM