Everything is Hard (in a good way!)

Today I saw the funniest thing: two trams and a load of cars were in a traffic jam caused by a horse-drawn carriage. I was quite pleased to be a pedestrian today as my moving pace was faster than the cars stuck in the back-up. In fact, everyday I enjoy walking around the city though that might change once the weather turns to freezing, wet, and smoggy. I've started to see the respiration masks I'd previously heard rumors of. In the meantime, I am very pleased that I made it to a thrift store and bought myself a big, long, puffy jacket for the frigid (but invigorating) mornings.

As my parents said, when you move to a foreign country everything is hard; it had taken me a few times walking past the thrift store to work up the courage to go in and figure it out. The setup was less organized than my formerly frequented Bellevue Goodwill, but I still found more things I wanted than what I could easily fit in my arms or the small shopping baskets they provided. After trying to look casual on my fourth circuit around the store I walked towards the curtained changing room. Based on my familiarity with thrift stores and the body language used, I could tell the two women manning the store were asking me if I wanted to use the changing room–"tak!"–and how many items I had. Rather than responding with "pięć," which I know is the word for "five," I just handed the woman my basket and had her count.

By the time I made it into the changing room my face was red and I was sweaty with embarrassment–not the best situation for trying on clothes. But in addition to the two jackets I had already tried on outside of the changing room, I also found two shirts that I liked. I didn't know the etiquette for returning unwanted clothes, so I delivered them back to the shelves they were pulled from. I felt okay going up to the cash register with my four items, partially because the two women had already been sympathetic towards my lack of Polish skills, but mostly because I had figured out the checking-out pattern at other stores: I say "dzień dobry" as the initial greeting, they ring me up and tell me the cost, I say "tak" in agreement, and then say "karta proszę." Sometimes they ask if I want a bag, but typically by having my reusable bag visible I'm able to avoid understating and responding to that question.

This time however, there was a kink–when I asked to pay with card they both knitted their eyebrows together as a way of communicating that they couldn't accept cards. In the few minutes that I have been holding onto these four things I had become attached to them all. I didn't know how to say "I only have 100 złoty in cash" but by showing them the bills, moving the two shirts to the side, and looking apologetic they got the message. Hot with embarrassment and trying to convey as apologetic of an expression as I could I fled the store with my goods and many repetitions of "dziękuję"–"thank you!" The whole walk home I was thankful I hadn't worked up the nerve to pay in cash at the cafe I was at the day before, otherwise I would have been really SOL!

On a typical day that interaction would have been more than enough of a challenge for me, but I had initially gone into the thrift store looking for a replacement of the brown clogs I had given up before moving. I took a detour from the thrift store back home in order to stop in two shoe stores. Before getting to the first one I found a park bench to pause at while I checked the size of my shoes: 41. In the first store, I found two pairs I wanted to try, brought them to the counter and asked "four-one, please." Presumably, she repeated my request but using the proper Polish words. I nodded my head and waited for her to return from the back room. She returned empty-handed and said something to me in Polish. Not understanding, I asked in Polish if she spoke English, after which she repeated that they didn't have either of the shoes in 41 but had one pair in size 40. After trying those on without success I thanked her, walked out the store, and hoped my sweating wasn't obvious to her.

At the second store, the store clerk was helping another woman but said something to me in Polish. I smiled and nodded even though I didn't know what he had said. I took a long time pursuing the shelves in order to give the other customer enough time to leave the store before I went up to the counter with three pairs. This time, I went ahead and started with "csz mówisz po angielsku?"–"do you speak English?"–and thankfully received an affirmative answer. I walked out of the store 15 minutes later with a great pair of shoes and a feeling of accomplishment.

After a successful day like that, my typical treat is to turn on TV when I get home. The real treat would be to turn on Netflix, but doing so gives me a strong sense of guilt and blobbiness so instead I've been watching Polish cable television. Nothing I've found has been particularly interesting (probably because it's mostly incomprehensible soap operas) but I tell myself that it is helping me learn. The commercials have already become mind-numbingly repetitive, but the repetition is probably good for my comprehension. In the combination of repetition and non-comprehension my mind wanders and I've come up with some realizations about commercials which I've never had the chance to experience in the US because we didn't have commercial television:

Despite the abundance and variety of cleaning products advertised, buying cleaning supplies has been one of the biggest challenges. Window cleaner was relatively easy to find because of the photos on the spray bottle. I'm not positive I chose a good general cleaner but the naturalistic thumbprint pattern gives me some confidence. We had issues with clogged sinks and showers, but Drain-O isn't a thing here. After looking through multiple stores without success, we got a recommendation from Cameron's coworkers for Kret (literal translation: "mole"). However, despite more co-worker suggestions I have not been able to find a deodorizer for the freezer, which unfortunately stinks terribly of fish. I've resigned to vinegar and baking soda, but lack the enthusiasm the women on TV have–presumably since I don't have the right products. I'm also just not cutout for a life of a housewife.

Luckily, my days as a housewife are numbered. We're leaving for the US on Monday (visa stuff) and returning to Krakow two weeks later. I'll have a few days in Krakow before we leave for London for a week (Cameron's work stuff). After that, I hopefully will be starting a new (hard) job! I don't want to share more until it becomes official (i.e. once visa stuff is ironed out) but I'll leave you with that happy note. 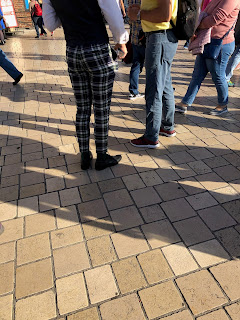 For those of you who were disappointed at my lack of photo evidence in the last post, I managed to snag a picture of some odd pants this week! 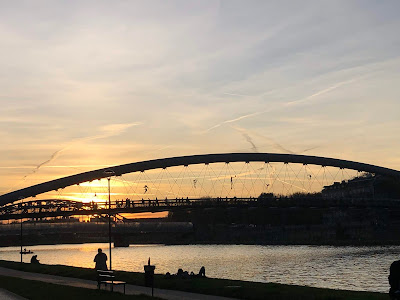 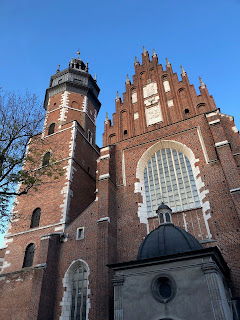 Another of Krakow's 200+ churches. 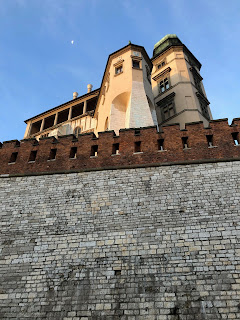 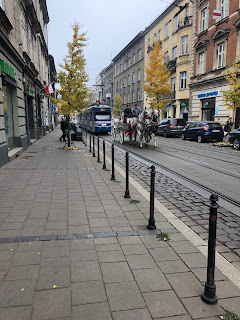 The horse-led traffic backup mentioned at the start of today's blog post. 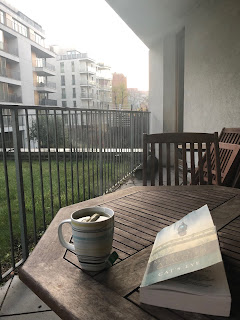 A good way to avoid housework: enjoy the crisp morning with hot tea and a good book.