My last flight was from Amsterdam to Krakow. Peering over my neighbor’s shoulder, I see mostly clouds. At some point the clouds dissipate into a translucent haze and I wonder if I am getting my first glimpses of the Polish countryside. It’s 4:34pm and my flight is expected to land at 5:30, so it seems possible. There is a snake-like river surrounded by patches of agriculture land and presumably darker forest areas. I can just make out the reddish roofs of what I assume is a small village and some white poles which might be a wind farm. Out the other side of the plane a few billows of steam rise up from a distant energy plant of sorts. Nothing looks particularly unique or shimmery with the glow of optimism and a new life, so I elect to to believe I'm not yet looking at my new home.

Soon after that, the landscape disappears behind a smattering of clouds so I go back to my book until I feel the plane start to descend. When I look up again, the sun is giving off the warm golden-hour glow and the vista is beautiful.  The fields are the bold colors seen in modern-day impressionism: vivid green, deep purple, bronze, and blue. As the plane turns I can see what I believe is the Wawel Castle nestled beside the Vistula River. There is a good chance I am looking at my apartment building, despite not being able to identify it. I can't help but smile and there is a tightness in my chest that I attribute to awe. The city has put on its evening finest; it is best first impression I could have hoped for.

I texted my parents and Cameron when we landed, and as I waited to get off the plane I reviewed Cameron's instructions on buying a SIM card at the airport and taking an Uber home. Cameron texts back "How long do you think you'll be? I was trying to surprise you at the airport but I might have gotten the timing wrong." Oh what a great surprise! I was very willing to wait for Cameron, even though I didn't think it would be a wait since I still needed to be bussed to the main terminal, collect my three suitcases, and buy and set up a SIM card.  Cameron joined me just as I was looking for an earring to pop out my old SIM card with. Not only was it great to see him, but he also took charge of setting up my SIM card and getting an Uber. I know I could have gotten through everything on my own but I liked being able to depend on someone else.


My first impressions of the apartment were very positive. It's noticeably bigger than our Bellevue apartment, and despite some quirks it has everything that we need. It was already past 19:00 (yes, I'm going to start using a 24 hour clock) so I didn't look around long because we were both ready for dinner. The walk to Stare Miastro (Old Town) is less than ten minutes, but Cameron encouraged that I dress warmly; it was eight degrees Celsius (about 46 degrees Fahrenheit) and likely going to get colder by the time we were walking home. Cameron took me to an Italian restaurant he had already tired, La Grande Mamma, which was right on the edge of Old Town.  Although I would have loved to sit outside under one of the heat lamps and look out at the plaza, we chose to go inside; they took us through a maze of staircases and rooms before seating us in a well-lit brick-walled cellar.

Apparently it was clear that we were American because the waitress started off speaking to us in English. We shared some garlic flatbread as an appetizer, each ordered a pasta entree, and I paired mine with a glass of wine.  In total, the dinner came out to about $30, which we thought to be very reasonable for the quality of food we got. Cameron wanted to keep showing me around after dinner. I was too tiered to walk to the Castle but he still showed me "the head" statue downtown and we walked around the main plaza a little. If I had wanted to, we could have had chosen one of dozens of ice cream shops–I would have expected nothing less in a European city.

After 11 hours of sleep, I woke up very pleased to be in my new apartment and free of any jet lag.  Cameron took the day off to show me around, which I was very grateful for.  I had an 11:00 appointment with two men at Pro Audit, a firm I was connected with via CLA's Nexia partnership. That meant I had to shower and iron an outfit (a habit that I think I will have to get very used to as we must hang dry our clothes) before heading out for the 15 minute walk. Cameron walked with me, which introduced him to a new section of the city across the river. Along the way we passed by some street vendors selling fruit and some baked good that looks like the cross between a bagel and a pretzel. I believe they are called "obwarzanek krakowski" but I think it will take some practice before I feel confident ordering one.

Krzysztof and Mirek were very kind to take an hour out of their day to meet me. Although they did not have a position that would be suitable for an English-only employee, they wanted to learn about what I was looking for before reaching out to their network on my behalf. I have already been introduced to an audit manager at PWC thanks to their efforts. In addition to work, we also covered more general topics around what to do in Krakow, the upcoming Polish election, and my first impressions of the city. I have high hope for finding a job, and even higher hopes of navigating the city without being dependent on a GPS; I made it home from Pro Audit without having to look at my phone.

The other big to-do for the day was to get PESEL numbers, the personal identification numbers that would allow us to get bank accounts and other necessities of Polish living. We walked 20 minutes to Cameron's office to print out our applications, then another 20 minutes to the government building for PESEL processing.  Figuring out where in the building we had to go was a challenge, and when we finally got our queue number we realized there were 40 people ahead of us. Luckily they had two dozen processing windows so the wait wasn't too bad, maybe only 40 minutes. Everyone needs to interact with the government on occasions, so we saw a range of people, including young women who I sized up as potential friends to a gaggle of nuns and priests socializing amongst each other. Cameron said he was reassured seeing that everyone else seemed equally confused to how he felt.

When ticket 229 was finally called, we found ourselves facing a middle aged blond woman who could not speak English. We had to wait another few minutes for her English-speaking neighbor to finish up with her last client. She was direct and abrupt, but she got us what we needed. We registered our residency and got PESEL numbers! We had been out for a long time, and still needed to go grocery shopping, so Cameron opted out of getting bank accounts on the way home. We tried the Kocyk across the street from our apartment, which was small and cramped but had all of the grocery basics we need. I made potato soup for dinner, for which we had to use a mug in place of a label, and we watched some Polish TV in the background as we ate.

Today, Wednesday, was my first day by myself. Cameron woke me up so I could have breakfast with him before he left for work, but after that I was on my own. I had a few chores I wanted to do (like buy a ladle), first of which was checking out Rossman to buy some household cleaning and toiletry staples. It was a successful purchase, but I couldn't interact more than to say hello and then smile apologetically when the cashier asked me a question. That will surely be my modus operandi for the first few months. Next on my list were some household chores: figuring out how to use the washing machine, dish washer, and where to take out the trash. I feel relatively confident that my ability to interpret symbols (aided by my googling abilities) led to successfully running the appliances. I practiced saying "Excuse me, where is the trash?" a few times in the apartment before walking downstairs to the security guard. It probably was the bags of trash in my hands rather than my Polish language skills got the point across and a gesture pointed me in the right direction.

After lunch, Cameron and I met at a bank and went through the process of opening an account. They needed his PESEL, passport, and proof of employment to open an account. I wasn't allowed to be a card-holder on his account because I don't have any employment–humph! Instead of going straight home, I walked with Cameron back to his office and then continued on to the neighboring shopping mall. In addition to the standard mall stores and food court (H&M, Zara, McDonalds...) there was also a large electronics store and grocery store. In the electronics store I found some lightbulbs and an extension cord. I also stopped in a home goods store to buy towels, bathroom rugs, and some kitchen gear (but no ladle). Unfortunately it was raining for my 20 minute walk home, and the bags were heavy, but nonetheless I was pleased with my purchases.  I spent the rest of the day organizing the house while listening to Polish television in the background. 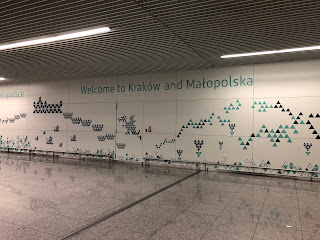 My first picture in Poland- a welcome to the Krakow airport 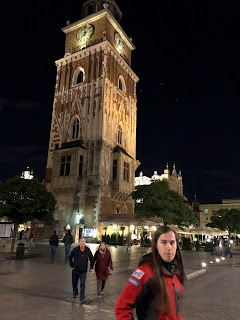 Out in Stare Miastro at night One of the fun staircases inside La Grande Mamma 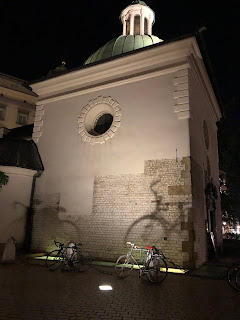 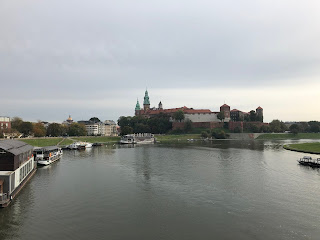 Wawel Castle and the Vistula River 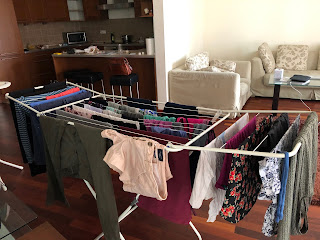 Drying clothes inside of the apartment 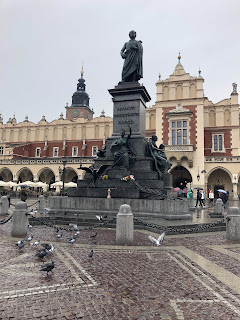 The Plaza during the daytime. I had forgotten how prominent pigeons are in cities.