For the last week (since Friday, October 11th) I have been going to #OMGKRK's office for a few hours each day to help with their marketing and preparation for Monday's upcoming Innovative Krakow Forum. My walk is about 35 minutes each way, and I try to find a new route each day. In addition to those strolls, I also have met Cameron at his office a few times (20 minutes away) and the two of us have crisscrossed through downtown looking for new streets. Essentially, I've done a lot of walking and a lot of people watching. Assimilation is the best way to show respect, but in order to fit in you must first know what is "in."

Here is a list of things I have noticed thus far:


I've also learned I am a terrible housewife, and I hate sitting at home trying to busy myself with chores. I was very productive and motivated on day one stay-at-home life, and every day since I've become more and more lackluster. One day I even left a stack of dirty dishes on the counter for Cameron to deal with when he got home from work (I know, I'm terrible and Cameron is wonderful!) In one of the girl-positive historical fiction stories I read as a kid (thanks Mom!) I remember the protagonist complaining that women's work is only every noticed if it is done poorly. Every time I vacuum, or iron, or wipe down a counter I think about that, so I've started to move towards a "don't clean until it's messy enough that the difference will be noticed" approach.

As mentioned, I'm only working (read: volunteering) for a few hours each day, but it's been enough to introduce me to a small group of really nice, young, English-speaking people. I'm currently trying to convince Cameron to let us have a housewarming party (mostly because I love the Polish term "parapetówka impreza" which literally translates to "windowsill party.") The remaining in-between times I fill with reading romance novels, applying for jobs, taking free walking tours of the city, watching Polish television, and trying to get comfortable spending Cameron's money.

Here are a few additional tid-bits I've picked up from those activities:
At some point (probably over the next week) I'm hoping Cameron and I will do a walking tour together, probably through the former Jewish district which is now know as the best place to go for beers or out dancing. We'll probably also buy at ticket for HistoryLand, which is the Muzeum Karkowa's history through Legos exhibit. I have an interview to prepare for (ugh, more ironing!), a day-long networking-focused event to facilitate, and (hopefully) a windowsill party to host! I just finished my latest book and will have to find another one soon, especially since we leave for Los Angeles next week (visa stuff). I'll be sure to update you all as I discover more!
...and sorry for not having any photos of the odd fashion choices I've seen. 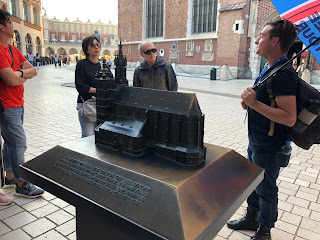 My tour guide telling us a legend of two brothers engaged as the architects for the Saint Mary's Cathedral steeples. 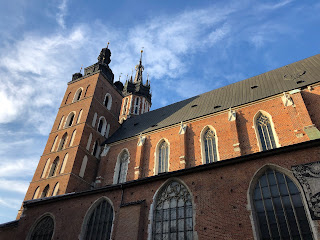 According to Chris, the tour guide, one steeple is taller than the other because the older jealous brother killed his younger brother and then committed suicide before the second steeple could be finished. 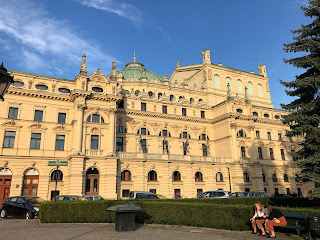 As with most buildings, the Juliusz Słowacki Theater had layers of architectural elements that correspond with the centuries of structural additions. 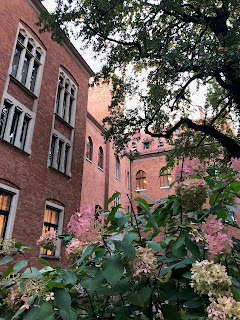 Jagiellonian University, where Pope John Paul II attended, although his name was Karol Wojtyła at that time. 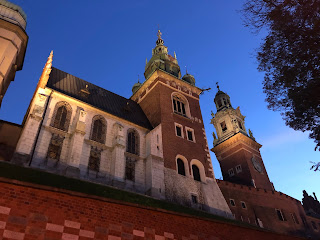 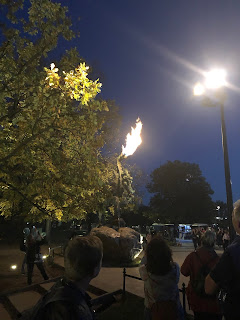 The dragon, Smok Wawelski, outside of his dragon den below the castle. The statue blows fire at random intervals, and it's said that it only goes off when a young virgin walks by (which is not often). 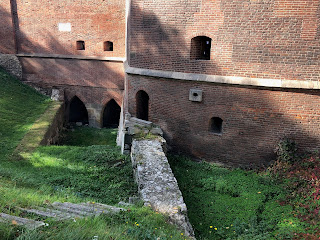 The moat and secret doors at Barbican gate.