It's the first truly raining day I've experienced in Krakow, and also the first Monday in three weeks that I don't have a Polish class to go to. I considered doing some Polish self-study, but given that it's Christmas week Cameron is also at home so it seems like I ought to take a small break as well (even though I don't want one). I really enjoyed having a place to go everyday, consistent people to interact with, and a challenge to pursue, and now I dread the self-inflicted pressure of finding something valuable to spend my time on.

Even though it was only three hours of class each day, during those three weeks I had a routine (which I could describe in simple Polish but will relay in English for the purpose of this blog). After waking up and eating breakfast, I would typically study until I had to leave for school. The school was about a 20 minute walk away through a fairly uninspiring stretch of residential roads so I would listen to my podcasts during the walk (something I try to avoid doing while at home by myself unless I'm folding laundry). The school was on the second floor of an old, dark building but was itself a well-lit cheerful set of classrooms. Class got out at 12:45 and I would walk home, sometimes buy an obwarzanek on the way home, and then study while eating leftovers for lunch.

There were seven of us in the class, and two teacher who rotated out during our 15-minute coffee break. Despite the limited number of students, our group was amazingly diverse. I was the only American, and the youngest in the class by almost a decade. There was a Vietnamese woman who splits her time in three-month blocks between Vietnam and Poland because of her Polish boyfriend. A Chinese woman had just moved to Poland but was trying to convince her Polish husband to move back to China. Two Brazilians, one of whom was also taking English classes but who had moved to Poland recently to get married to a Polish woman and the other who was in his 50s and hadn't lived in the same location for more than six months over the last ten years. I never really got the story behind the Ecuadorian man, but he was about 40 and . The last person to join was originally from Vancouver, BC, but had been living in Poland for the past three years with his Polish wife.

I was quite jealous that most people in the class had native-Polish speakers at home to study with, but I'm sure my extra time (because I wasn't working or taking a second language class) was envied by them. Our little group became quite amicable during our coffee breaks and after-class pack-up. I had brought in banana bread at some point during the first week and almost every day after that someone else brought in a treat to share with the group. Over the three weeks I tried traditional Polish doughnuts covered with an orange glaze and filled with rose-flavored jelly, Portuguese custard tarts, and healthy-feeling seed cookies, among a variety of other small snacks and treats. I became good enough friends with my seat-neighbor to go out to lunch one day after class and to seek out a yarn shop on another day once she learned I was taking on some crocheting projects. A few of us went to lunch together on the last day, and many of us are friends on Facebook or Instagram now, but I don't have high hopes for continuing friendships.

The course ended with a 90-minute final exam followed by a small awards ceremony where we received a report card and certificate of completion. Even though I had more classroom time in my three weeks as someone would get taking the semester-long course, I might have preferred the more drawn-out option. For one, there would have been more time to bond with my classmates. Also, learning a language requires a lot of memorization and repetition, and despite studying for up to four hours a day after class I could have used more time to let the vocabulary steep into my usable lexicon. It's nice to have a crash-course of most-needed phrases, but I think if I were to sign up for another one it would be the longer-lasting evening class.

I do feel more confident out in the world, and being able to say numbers and ask about the price of something has already been quite helpful out in the world. I was able to ask for four small boxes, three big boxes, and eight envelopes at the post office the other day. Also, thanks to inspiration from the "common Polish foods" section of my Polish book Cameron made naleśniki, Polish pancakes, for breakfast the other day. Some days for homework we were told to ask about the price of something at a shop or to order a meal at a restaurant or repeat back the price of something we were buying an because I was instructed to do these tasks as a school assignment I felt more empowered to make mistakes or look like a tourist. At lunch one day I even took out my textbook and read from it directly when asking to split the check.

Once Christmas is over, I think I will try to keep up some of the routine that was set by my class. I plan to set aside at least 40 minutes each day to walk around town, even if there isn't a particular destination I need to go to, followed by three hours of Polish-related studying. That might include re-reviewing my textbook or making an attempt to read Matylda. Since the primary library is quite close to the school, I'm thinking that might be a good alternative spot to head to in order to get out of the house. Maybe starting next week I'll be a common visitor to the children's section.

Even when my day was filled up with class-related things, I still found time to take care of most of the little tasks I had created for myself on my keep-busy list. After crocheting a matching mittens and scarf set, I made myself a beanie followed by a doily-like table centerpiece. I've baked pretzels, banana bread, apple muffins, and Christmas cookies. Because of Christmas there aren't many people on Bumble BFF who have time to meet up. All of the specialty shops I've needed I've  found. I've even taken to running two miles a day when the air quality is good. Fingers crossed that the work permit is processed soon, but in the mean time let me know if you have any clever ways to stay busy! 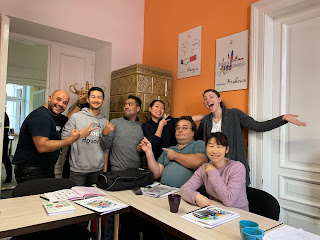 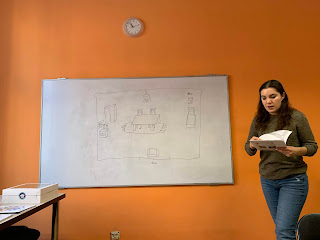 One of our teachers, Aga, and the picture of a room that we drew as a class. 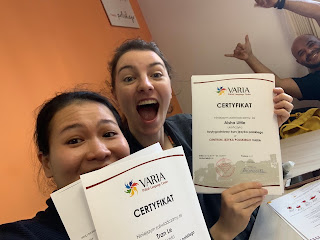 Tran, me and Jorge