Shopping in Poland and Christmas Preparation

Ah, another week and many more projects undertaken!

I'm still quite amazed by how simple errands and chores become such grand adventures here. It's a mix of not knowing the language, but also the organization of the world is laid out differently here than in the US. In America, if I needed some semi-obscure thing I would go to a mega-store like Fred Meyers or Walmart. On rare occasions I would go to Home Depot for home projects. I might quickly Google "where can I buy..." and then if nothing showed up immediately I'd order it on Amazon. And if it was something really obscure I would search on Etsy. Since none of those are viable options here, I have to resort to alternatives.

Allegro is the best alternative to Amazon, but with some key drawbacks. For one, the site does not have an English language option, so any online shopping requires the aid of a Polish/English translator. But of course, not everything has a direct translation, and sometimes we don't know the correct English term to try and translate. For example, we wanted a "sifter" for sifting flour and powdered sugar with, but when I type in the Polish translation"przesiewacz" into Allegro's search bar I get a series of concrete mixing machines. So next I go to Amazon and search for "sifter" to learn that it is more appropriately called a "mesh strainer." Per Google Translate I now type in "filter siatkowy" into Allegro. This time I am recommenced various bolts and washers that look like they might be used for some sort of plumbing? Ok, back to Amazon. Some of the appliances there are labeled as "flour sifters" so I try the Polish version–"przesiewacz do mąki" in Allegro. Alas! A search result that actually is what I was looking for!

Even once we find what we want online, getting it delivered to us is another adventure. We've had a few packages arrive at our apartment, but they all have come in different forms. Sometimes we get an official slip in our mailbox directing us to pick up a package at the post office. One time a note was left taped to our door informing us that we had a package at the front desk. Another time we received an email from the online store telling us a package was delivered, but nothing was on our door or in our mailbox, so we just had to know to go down to the front desk. Also, with Allegro, sometimes a package will be delivered to a community drop-off point rather than your house. Surely there is a logical explanation as the various postal deliveries, but you can see why it's typically easier to buy something in person, when possible.

Galeria Krakowska, the mall, is naturally the best place to start when looking for a new product. There is a big grocery store that also sells a selection of office/school supplies, toiletries, kitchen appliances, cleaning supplies, and seasonal items (like wrapping paper). If they don't have something surely one of the other more specialized stores in the mall will. Media Markt is where we go for electronics, Rossman or Hebe carry a similar array of household products and toiletries as a Walgreens, and there are a few kitchen-supplies stores. Even with all of these options we've struggled to find a pie dish, a fondue pot, and (as previously mentioned), a sifter.

When we need something, I will typically do a search of my own after Polish class. Even when I don't have anything in particular I'm looking for, I'll often wonder into miscellaneous stores just to catalog who sells what for future needs. If my attempts and tracking down our item du jour come up empty handed I'll enlist Cameron to ask his coworkers. Although very willing to share advice, often times the things we are looking for are beyond the normal shopping knowledge of his coworkers. I think we will have to make do without chocolate chips and sweetened condensed milk during our time here. One coworker did say she found corn starch, but I haven't been able to verify that, so in the meantime we are swapping in potato starch.

Most the time I'm satisfied with an alternative or living without, but there are a few things for which that will not work. In those cases, I turn to the Krakow Expats Facebook group. Most of the time I get a handful of likes and then two or three comments. Usually, one of the three comments will be truly helpful. Thanks to other Expats I found a pretty good post office for shipping packages internationally (which no matter how convenient is always going to be expensive) and a lovely garden shop. I would have loved to buy a full-sized Christmas tree, but I wasn't willing to carry it over my shoulder for 40 minutes and there was no way I was going to try and walk onto a bus with a Christmas tree. Instead Cameron and I have a 40cm pine tree of some sort that is planted in soil and will hopefully keep living until next Christmas.

Speaking of Christmas, our house is about as decorated as it's going to get, however with our orange curtains it's hard to feel like we've taken on the Christmas spirit, no matter how many lights we hang up. We have a few strings of lights, some mistletoe hanging in the main hallway, and our little tree is decorated with homemade crocheted snowflakes. Cameron and I have already done all of our Christmas shopping and have thoroughly explored the Christmas markets, however there was a one-weekend Christmas bazar that we went to on Saturday. As we approached the address, we realized it was in a very ugly concrete building that is covered in one big advertisement and which I regard as a general eyesore on the river bank. Just the previous weekend Cameron and I had been debating whether the building was used for anything, and it turns out it makes a great spot for a 200+ vendor Christmas bazar! Other than a little art for our apartment (happy Christmas to us!) and some homemade treats we didn't buy anything, but it was fun to walk around.

The next day (prompted by our need for a sifter and fondue pot) we headed off to the mall. Being so close to Christmas, this weekend was an exception to the no-shopping-on-Sundays rule. On the way there, Cameron pointed out a sign for a "book, ornaments and pastry fair." Intrigued, we had to go in! We went into our first Krakowian church, which was filled vendors that sold either books, ornaments, or pastries (nothing else) and tons of huge religious-themed art on the walls! The vendors were setup in a series of vestibules next to the main chapel, which was simultaneously holding Sunday mass (a bit odd, in my opinion). Still on sugar-overload from the previous day's treats, we turned down the pastries being peddled to us, but for some reason decided to buy Polish copies of Harry Potter (books 2 & 3) and Matilda. Cameron is already through the first 11 pages of Harry Potter i Komnata Tajemnic (he claims he's pretty much memorized the book in English so he can easily translate it) but I've opted to wait until my Polish class is over before I start on Matylda. I know the book is way over my current language skill level and will take intense translating time to get through it.

As mentioned in a previous post, there is a small Christmas market outside of the mall. I had not yet tried grzane piwo–hot beer–and Cameron was keen to get his hands of some hot market meat. The beer was defiantly an experience...but not necessarily one I'm going to seek out again. I watched as the woman poured some cinnamon into a plastic cup and then started to dispense hot foam from a spigot. The foam slowly condensed into liquid beer,  but it was a series of her pouring foam, waiting a minute for it to mellow out, and then repeating the cycle until 3/4 of the glass was drinkable liquid. In between one of the cycles she also poured in a reddish liquid, which I'm guessing was raspberry or cherry syrup. In the end, the primary flavor was an amplification of the tinniness that I associate with cheap beer. Cameron said his sausage (which ended up being 3x bigger than he anticipated) tasted exactly like he expected–low-quality meat that had been overcooked but was a good hearty way to fill yourself up. Both, I'd say, are experiences that are rightfully reserved just for once a year at a Christmas market.

The Christmas markets, alongside the rest of the city, will close down on the 24th. Knowing that we will have limited shopping and activity options December 24-27th, I'm trying to make sure Cameron and I have a Christmas plan in place. Christmas Eve is the primary celebratory day here, and after deciding against cooking a traditional 12-course Polish dinner for just Cameron and I, we decided to make a reservation at one of the few places that will be open that night. Depending on how we're feeling afterwards, we might try to follow Polish tradition and attend midnight mass at one of the nearby churches. For Christmas dinner, I'm hoping to invite a few people over for cheese fondue (typically a Christmas Eve tradition in the Leapley household). We'll have to make sure to do our grocery shopping in bulk beforehand so we actually have ample food to feed anyone who can make it. Based on my research, I'm also keen to go to a living nativity scene on Christmas Day, go ice skating, or check out the Christmas crib exhibit at Museum Celestat. Mostly, I want to make sure the day feels like a holiday and isn't just an excuse to watch another season of Ru Paul's Drag Race mid-week. Feel free to share ideas with me! 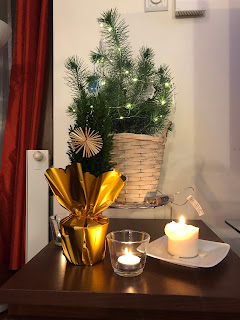 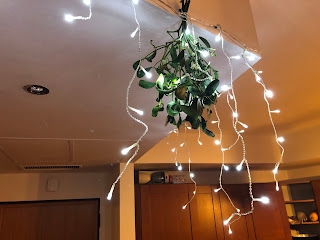 Mistletoe and lights hung around the house. 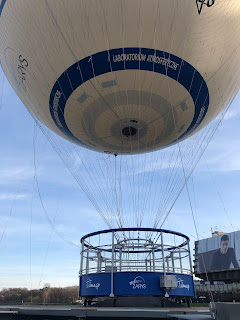 The building you see in the background with the big blow-up image of a guy leaning forward is the ugly advertisement building which hosted this weekend's Christmas bazar. 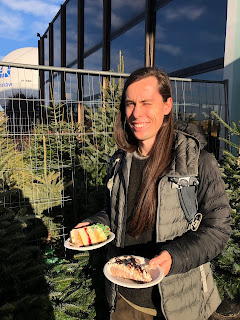 At the bazar we tried a vegan Kinder Country-flavored cream tart and a raspberry/pistachio/cherry cake. 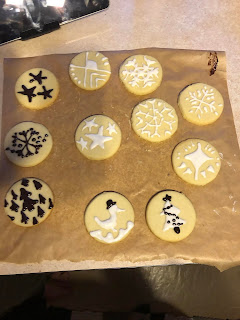 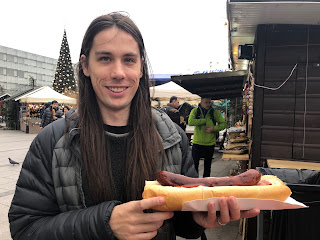 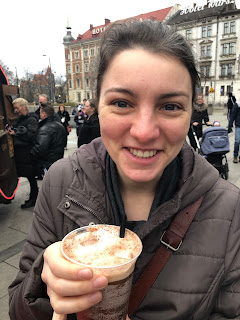 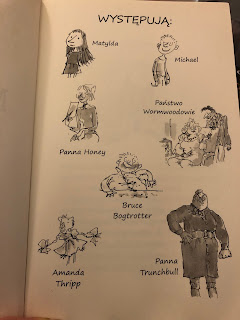