Thanks to Dad's advice (Happy Fathers Day!) I've resigned to do things on my own more. I used to be out of town every other week, so I'm sure my omnipresence is exhausting to poor Cameron. But as an extravert, "on my own" is not to be taken literally. Which is why I invited myself along on my friend's trip to Wrocław.

My friend Emily, even though she will deny it, is an exceptional solo traveller and a wonderful person to learn the ropes from. I felt bad only inviting myself along after she had already figured out the buses and hostel. I felt less bad once I learned that another of her friends (Christina) was also piggybacking on said plans but I still wanted to contribute to the trip and read as many "48 hours in Wrocław" blogs I could in the two hours I had before my bus left Friday afternoon.

The most useful information I gathered were food recommendations, which I mapped out onto our free city map. When there are three people-pleasers trying to make a decision it's nice to have a pre-set list to refer to. And all of it was good! We had pizza, Indian, bagel sandwiches, and of course lody (ice cream). Actually the only semi-disappointing meal was a Polish restaurant recommended by our tour guide, but I'm assuming it was our fault for ordering vegetarian dishes.

Emily had planned two free walking trips, which I agree are an ideal way to see the city. Based on the timing we had already walked through just about all of town by the time of the first one, but we still got lots of good info. Saturday afternoon's tour revolved around WWII. It was our tour guides first day back at work since March and he clearly was a little out of his spiel, but he did an excellent job of searing "1945" into our brains. In short, that's the year Wrocław (then the German city of Breslau) was bombed by the Soviets and began to re-transition into becoming a Polish city once again.

Sunday's tour was the highlight for me. It was almost three hours and covered old town. In addition to giving us context for the buildings we had been walking between, we learned fun little facts about the mayor's cat and a recommendation for the best ice cream (this recommendation was much better than her lunch spot). We also learned about the dwarves!

My pre-weekend research had prepared me for the dwarves. I knew there were at least 300, but our tour guide said it probably was closer to 600 these days. Almost immediately after getting off the bus I started spotting them. Most stand about 30cm tall, are cast in bronze, and all emulate their own cheeky personalities and professions. The dwarf is Wrocław's symbolic mascot, but if I remember the history correctly the dwarf first showed up as anti-communism graffiti and became the city's voice of rebellion.

There was so much more crammed into our weekend trip, and I'm sure that this city of 640,000 houses plenty more that we did not see. In addition to being the city of dwarves, the Venice of the North, and the European capital of culture, it also is the #1 city for expats. I love Krakow, but I think I could have been equally happy in Wrocław as well. 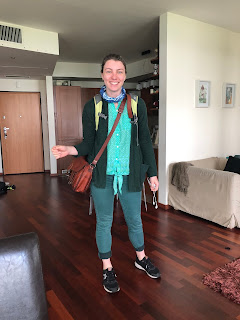 I thought I looked like a cute traveller so I made Cameron take my picture before leaving. 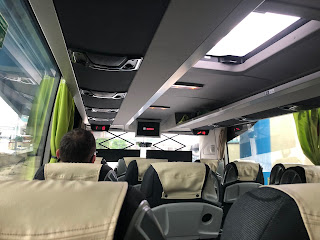 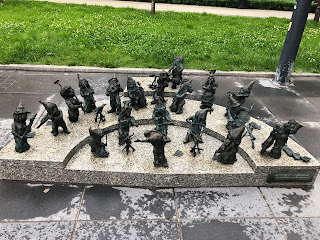 A concert of dwarves outside of the opera hall. 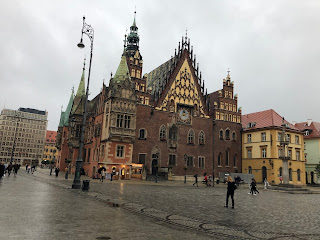 Town Hall- one of the buildings that survived the bombings of 1945. 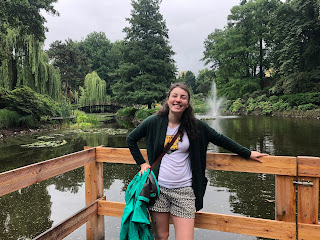 A Monet-esq pond in the Botanical gardens. 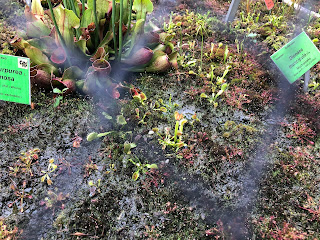 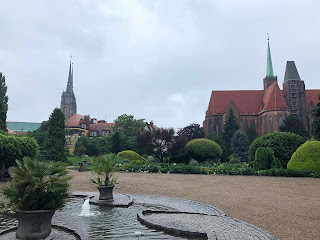 There's a reason they call this area the Isle of Cathedrals. 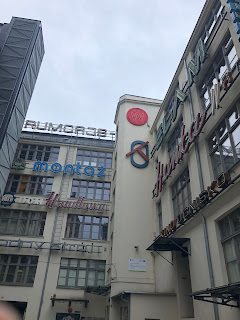 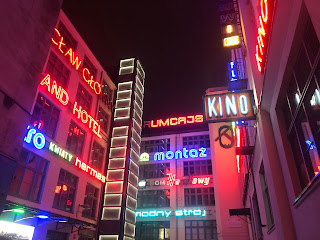 I changed out of my jammies at 10pm to trudge through the pouring rain to see the signs lit up at night. 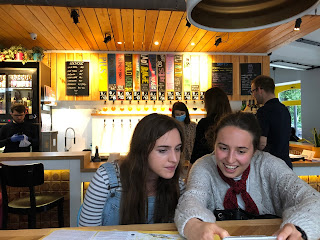 We met a French solo traveler on our Saturday WWII tour so our group of three became four at one of the local breweries. 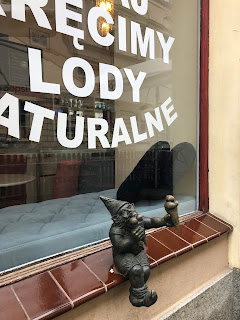 My favorite of the dwarves! He and I have similar interests. 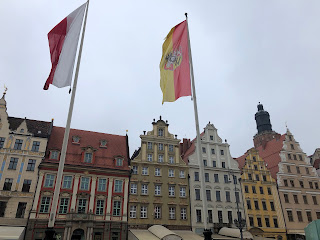 Old town has been rebuilt with colorful Polish architecture, but the gray skies didn't do much for the vibrancy. 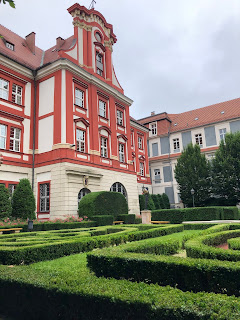 The library that holds some of the most valuable historic pieces of Polish literature. 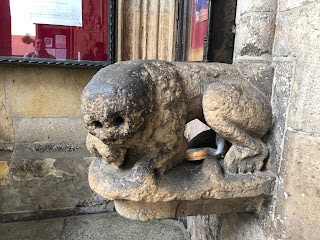 This creepy creature is a lion outside the Cathedral of St. John the Baptist.