Cameron's birthday activities extended into the weekend. On Saturday evening we Zoomed with Camerons college roommates and played Jackbox Games for a few hours. Despite some timezone confusion and low quality internet from our side (the game hosts, unfortunately) we had a fun time. The slight disappointment from my side was that I thought I had set up this friends night in secret, but Cameron knew what was afoot when he received the email receipts of my online game purchases...whoops! I guess I used the wrong card to pay with, but what's mine is yours, bay-bee! 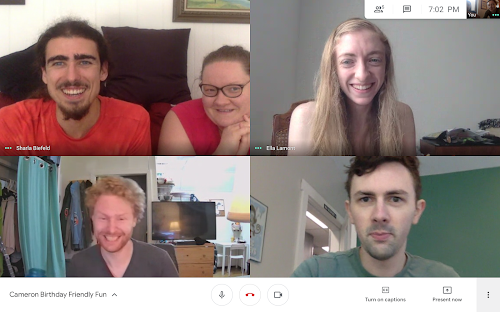 Look at everyone having a good time! Coordinating across three time zones means people playing at 10am, 1pm, or 7pm.
I woke up on Sunday morning with no expectations other than a keen hankering for breakfast birthday cake. Cameron, on the other hand, woke up with a plan to run 28 miles for his 28th birthday.
He had mentioned this a few times, but I figured since his birthday had come and gone, so has this idea. Plus, I think the longest run he had done this year was 32kms (ish), the equivalent to about 20 miles. Yes, Cameron has run marathons before, but this was going to be his first time going beyond 26.2miles, and this time also without the support that a race event offers (snacks and water along the way, a pacer, cheering crowds, and friends running along besides him).
Let's also talk about me! I was going to be biking besides Cameron during this ordeal (a poor substitute to standard race time support), and I had never biked so far. I don't think I've ever biked further than the 32km training runs, and let me tell you, my bum is so sore after those rides! Yes yes yes, I know running any distance is going to be much more exhausting than biking that same distance, but I was a little apprehensive about my abilities to join in on this physical feat while maintaining an encouraging attitude.
Alas, we packed the bike into the car and set out on a 30 minute drive east of Krakow to Puszcza Niepołomicka. It turns out this 110km² park was ideal: lots of parking, flat, and (mostly) shady. The maps sprinkled around the perimeter showed many bike routes, and there was a variety of hikers, mushroom pickers, kids bikes, and elite bikers out on the paths. We started near Castle Królewski in the town of Niepołomice, and already at 10:30 there were people celebrating their morning rides with an ice cream.
The first third of the ride was pretty boring. We stayed on flat paved road and were passed occasionally by cars and other bicyclists. The forest was nice, but nothing special, although we passed a few small raspberry bushes. I didn't get to eat my fill, though, because every time we stopped we were mobbed by mosquitos. There are apparently European bison on the far end of the park, but we didn't make it quite that far. Finally, we cut across from the north end to the south end on a gravelly path, and I thought "finally, we're off the road" only to quickly start to think "I wish we were back on flat surface, my bum is going to be real sore if we keep this up."
We had now crossed the halfway point, and Cameron seemed to still be doing well, although when I asked "do you want to just go ahead and finish a full 50km today" his response was a hard no. The second half was surely harder. Not only was Cameron getting tired, but the day was getting hotter and the bushy forest trails we were now on had more mosquitoes. So long as we stayed moving they didn't bother us, but stopping to drink water or a snack meant we were inviting the bugs for a feast, too.
Somewhere towards the end (probably in the last 10km) I noticed Cameron start to slow down. We reached an open sunny field and the path had turned from dirt to large rubble stones, which are annoying for both runners and bikers. I thought I was being helpful by monologuing, thinking that I was providing some sort of entertainment to focus on that didn't require a response, but Cameron finally asked me to stop (rather snappily, I might add). After that we each put in our headphones and listened to our own media.
Finally, we reached the end! Or I thought it was the end but Cameron ran in circles a few more times to make sure he met the full 28 miles. To celebrate, I handed Cameron some cheese, crackers, and a bottle of Spezi (half cola, half orange soda). Then we joined the rest of the crowd and waited in line for some ice cream, the treat that is perfectly suited for every occasion.
You can see our full track, here. 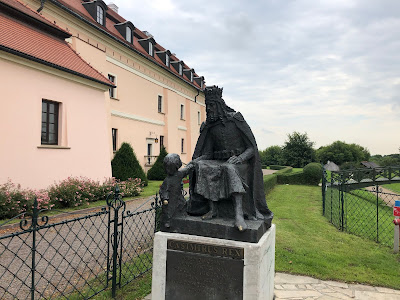 Statue outside the castle grounds at the start of our bike/run. 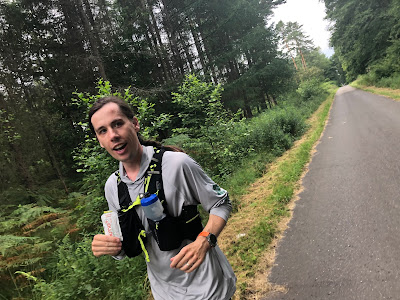 A happy runner, before he got hot, sweaty, and exhausted. 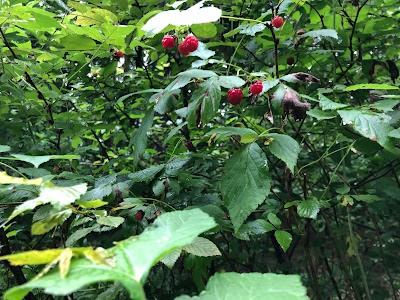 Raspberries along the side of the road. 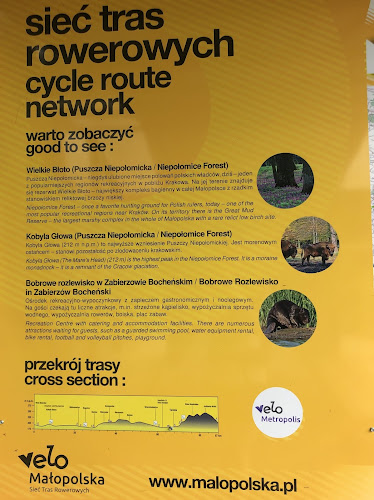 Recommendations of highlights around the forest, including bison. 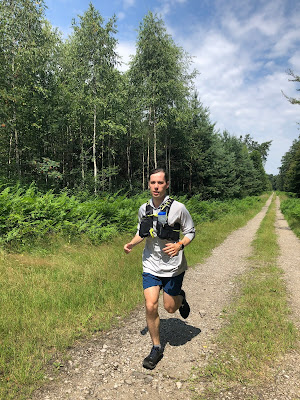 Still a good runner. This is about halfway through. 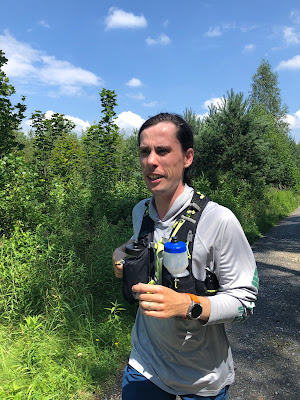 Starting to get that glazed donut look. 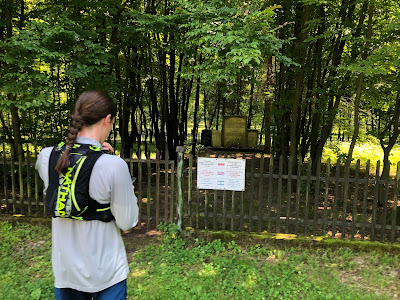 There were some points of interest along the way, like this Jewish tombstone, but we couldn't stop long enough to see much because of the mosquitos. 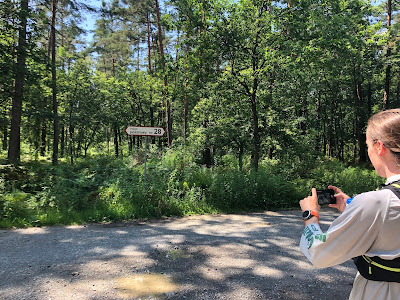 It seemed fortuitous to be on path 28, since this was a 28th birthday celebration run. 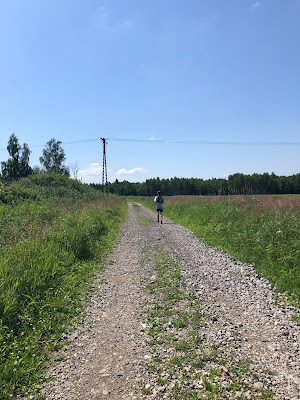 The long sunny stretch with the terrible rocks that broke Cameron a little. 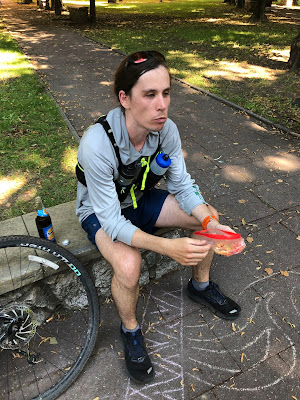 The face of someone who just ran 45km and is now exhausted. 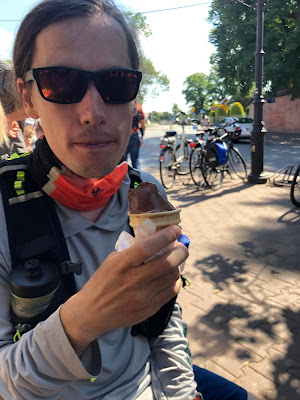 Looking a little better after ice cream.
Posted by Aisha at 6:26 AM