There has been continuous snowfall for the past three days. It's been a real treat, especially since I have the time to go outside to enjoy it, and especially since we had virtually no snow last year.
Depending on where you look, Krakow is sometimes referred to as the gateway to Poland's winter region. It's the only big city that's near mountains, and when there's a Christmas market going on and it's blanketed in snow it truly looks like a winter wonderland. Many weather and tourism websites virtually guarantee snowfall and strongly advise tourists to pack heavy boots and thick parkas. I even read that there is some mythology that "Poland" got its name because the winter weather reflects the arctic atmosphere of the North and South 'Poles'.
That's why last winter was so disappointing. Although many people said it was a one-off year, many others said that this was starting to become the new norm and there hadn't been a true white winter in Krakow for many years. Even Zakopane, the true winter capital of Poland, stayed pretty dry–there were no horse-drawn sleds and the ski slopes were heavily supplemented with man-made snow. I got the sense that many people were accepting that if they wanted to experience true winters they would have to go beyond the Polish borders from here on out.
This week's snow in no way matches the multiple meters of snow Krakow used to get in decades passed, but I got the sense that it re-sparked the joy of winter in many people. It came after the traditional holiday season ended but still early enough that the kids were able to enjoy it before going back to school. I saw dozens of snowmen and bundles of kids being pulled along on toboggan sleds. I went out for extended walks each day to see my favorite parts of the city with a refreshed view: Krakus Mound, Rynek, Zakrzówek, Wawel...
It's a good thing, too, because even though the snow probably won't continue after today the temperatures are going to start plummeting down to -13, -19, and -17 degrees Celsius, respectively, for the next three days. Thanks to a Siberian weather system, Southern Poland might experience the coldest winter weather it's had in 20 years. Although I am excited for the snow, I am hesitant about the chilling weather. I'm already wearing my Icelandic wool sweater every day, even though it's only been hovering around freezing. I keep telling myself that it's good I'm experiencing it now so that way I know if I can handle proper winters if we end up choosing to move somewhere like Montana or Michigan. 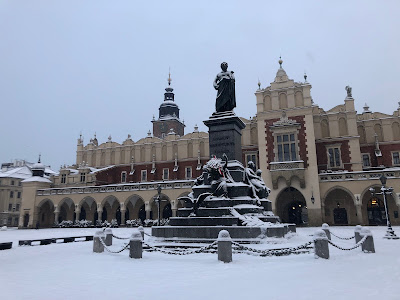 The Head statue on the other side of the main square. 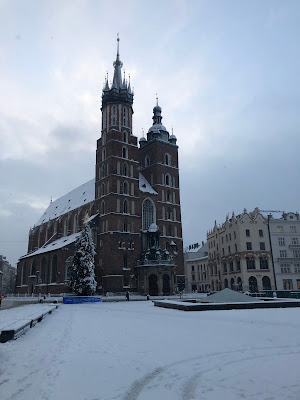 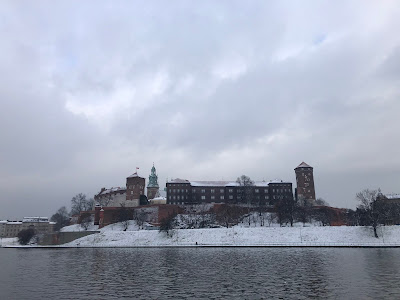 Walking along the river across from Wawel castle. There's a chance we'll see the edges of the river freeze next week. 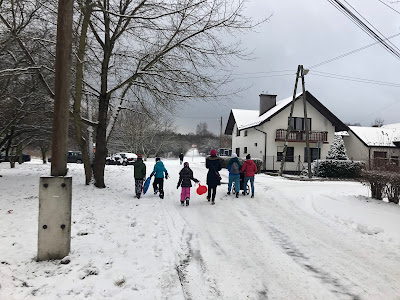 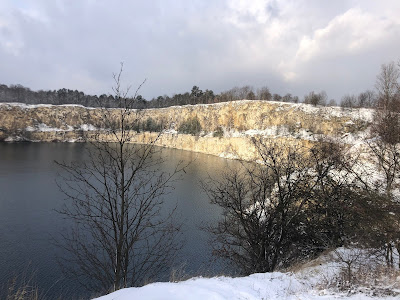 Even in the snow, there were some people swimming in Zakrzówek. 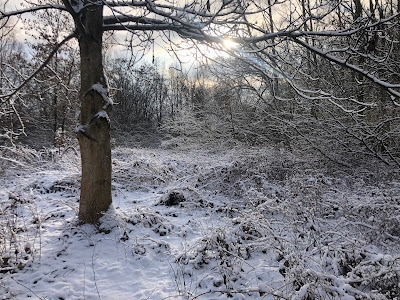 I love how accessible nature is in Krakow. 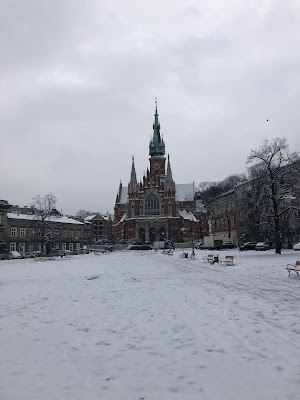 The most beautiful church in Krakow. 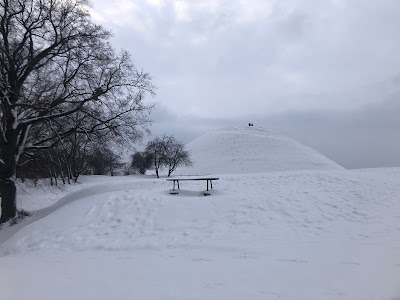 Krakus Mound blending into the sky. 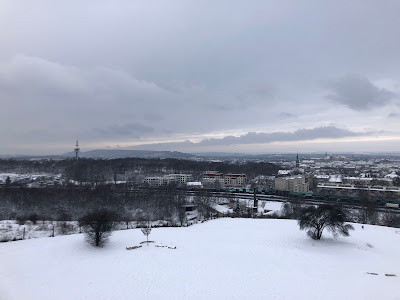 Winter views from Krakus Mound. Although not well captured in this photo, I could see that Kościuszki Mound was also a white dome.
Posted by Aisha at 4:16 AM