Where the Houses Bloom

Zalipie is a village of less than 1,000 people, approximately 1.5 hours drive east of Krakow. If you look online at what the median age is, it will say residents are mostly in their 30s, but based on driving around the town you would expect the median age to be closer to 60 or 70. It's a farming town, with most houses neighboring a large field or a fenced in pen full of ducks, geese, and turkeys accompanied by a guard dog. All-in-all, it's a pretty typical Polish village, yet it has been on my Polish to-do list for months.

Despite it operating as a small standard farming community, Zalipie is listed as one of the most beautiful places to visit in Poland. The town has a tradition of painting its houses, both inside and out, in intricate floral patterns. The more traditional walls are whitewashed first, but the flowers can be found on all shades of painted wood, stone, dog houses, wells, bee boxes, bicycles...just about anything.

That's not to say that every structure within Zalipie is smeared with paint, but an annual cottage painting competition generates enough interest that as you drive around the small town it seems like every third home has at least some painted surface. Those with the most elaborate homes are very proud of them, and will often welcome you into their yards to get a closer look. We definitely shared a few waves from our car window with a few locals, and I had a very rudimentary conversation about a turkey farmer's painted barn shed. In addition to being the cutest village we've encountered, I think it might also win #1 in the friendliest village award category.

Despite Zalipie showing up on just about every "top 10 things to see in Poland" list, there isn't a whole lot of fanfare around the village. There is a community center that, when open, gives out maps and tourism information, a museum, and a gift shop. Near this public-interest sites there is some signage, but the history of the blooms is fairly pedestrian, and isn't even that old of a tradition.

Within the last two centuries, housewives would paint the interior of their homes white to help brighten up the dark walls caused by the smokey stoves. Even after the walls were painted, dark soot spots would still be visible, so those were covered up further. The concept of covering the dark spots with bright colorful flowers spread across the town and from the inside to the outside of homes. Since then, the paint has changed (from a milk- and fat-based paints to our modern longer-lasting versions), the paintbrushes are no longer made of cow tail hairs, and the wood-burning stoves have been replaced. The annual cottage-painting competent was introduced after WWII as a means of cheering people up after the war. Despite the relatively new history, the town feels old and quaint. 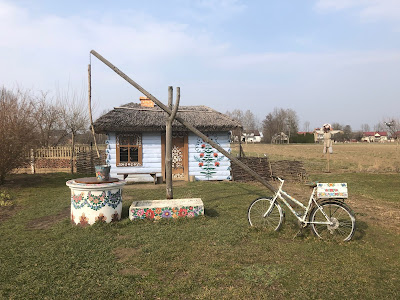 This is a little staged area near the "Dom Malarek" which translates to "the house of the painters." It was especially nice that they had this outside area because inside was closed (due to recently reinstated Covid restrictions). 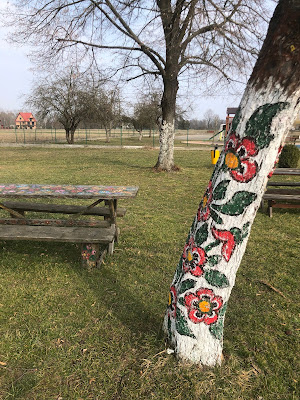 Even the trees were painted. 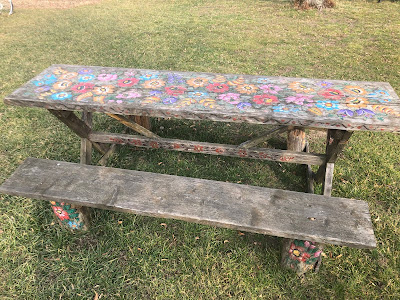 Despite the paint used these days being longer-lasting, it is still a tradition to touch up the prior year's blooms. It seems this picnic bench hasn't had it's annual touch-up yet. 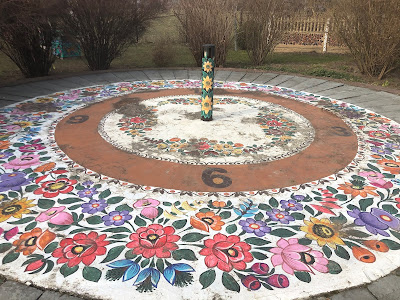 A sundial, that was pretty close to right. We arrived in town at around 14:30. 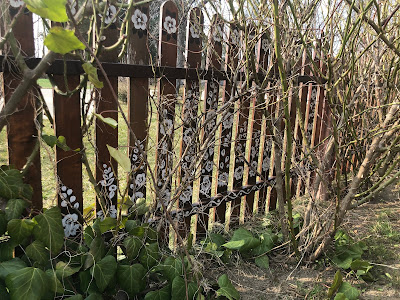 I'm sure if we had spent more time, we would have found even more secret paintings tucked away in less obvious places, like this bush-covered fence. 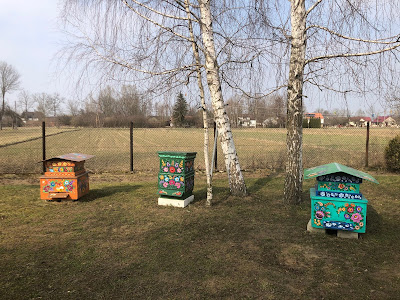 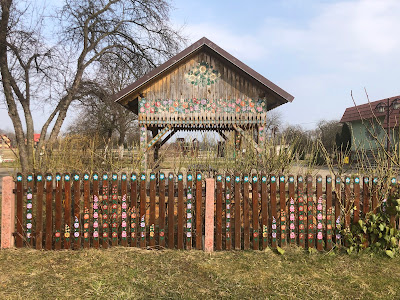 A lovely gazebo outside of Dom Malarek which would make a great lunch spot. 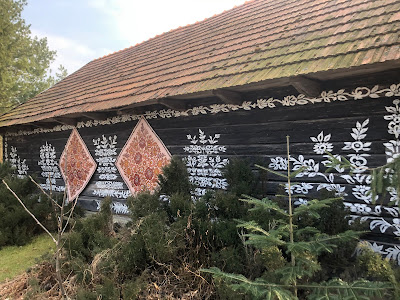 My favorites were the paintings on dark wood rather than on whitewashed walls. 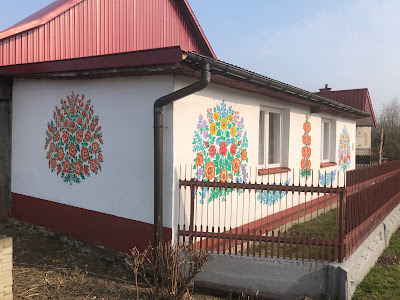 A pretty common home exterior. I read that the paintings often don't mimic real flowers, but are just a bright collection of the artists' inventions. 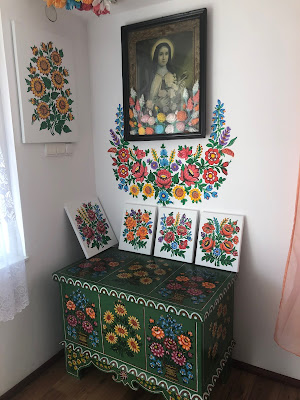 Although it was supposed to be closed, a man let us into the souvenir shop, which was staged like the inside of many of the homes around the village. 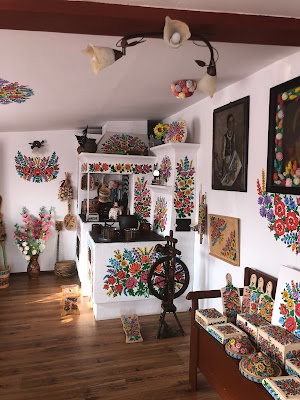 Although there are only about 20 homes that are excessively decorated on the outside, over 50 houses open up their interiors to tourists during the annual cottage decorating competent. 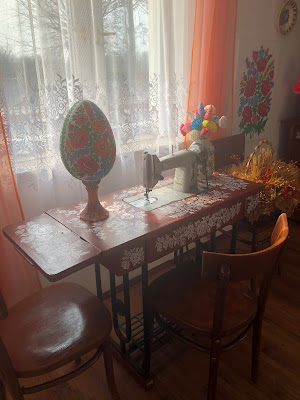 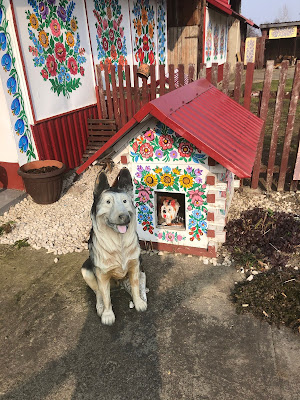 In many yards we passed, the dog houses were often the most elaborately decorated features. 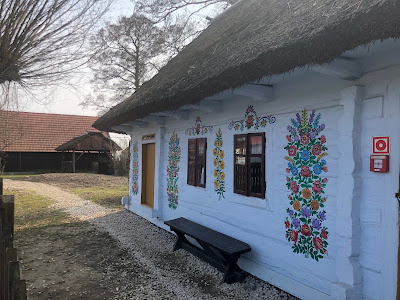 This home is part of the museum. The main museum building is the former home of Felicja Curyłowa (1904-1974), who is thought to be the primary reason why the floral paintings became a town-wide tradition. 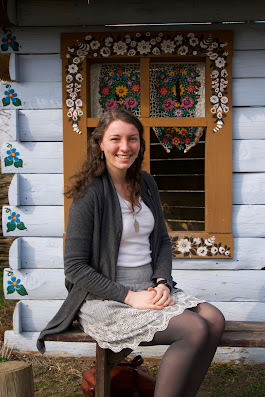 And because I'm conceited, I made Cameron take some photos of me. The village is just so picture-perfect that I couldn't help it!
Posted by Aisha at 3:01 AM