Dubai, a Delightful Drop In

This was the vacation I didn't know that I needed. Of course there were some stressful moments. It was expensive and it was hot, but it was fun, friendly, it felt safe, and in some ways it felt homey.

I'll start with some overall impressions of Dubai:

You'll notice I didn't put "expensive" on the list. That's because I expected it to be pricey, and while it was, it wasn't outrageous. Everything we did and every place we ate were priced pretty comparably to other places I've been (such as Seattle and London).
But now to the fun stuff! We had a full itinerary and I liked everything we did. Some things that made it onto the agenda were:
Time at the Beach: We walked around a fancy private beach for a bit our first day (even though we kind of snuck in) and then also spent some hours lounging and swimming at one of the public beaches, which was also very nice. The Persian Gulf has warm, blue water, and the beaches (even the public ones) are sandy and clean and include free public restrooms, changing rooms, and showers. When we didn't want to pay for a taxi to drive us 20 minutes to the beach we also had access to a pool in our building. 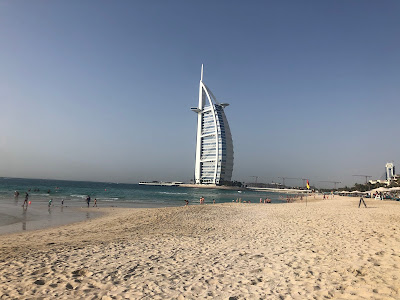 The Burj Al Arab, which is one of the tallest and most high-end hotels in the world.
Jumeriah Mosque: This was one of my top things to see, since I like to experience the local culture when I visit a new place. Jumeriah Mosque opens their doors to visitors every day for a mosque tour and presentation on Islam. We were taught about the five pillars of Islam, the significance of Ramadan (which started while we were visiting), and we watched as someone demonstrated the daily prayers. The employees at the mosque were welcoming and encouraged us to ask any questions we liked. They live up to their motto 'open doors, open minds.' 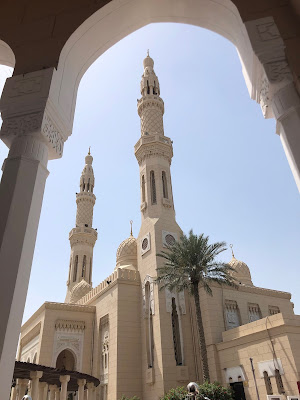 There are nearly 1500 mosques in Dubai, most of which have these characteristic minarets (the steeple-like towers).
Burj Khalifa: The tallest tower in the world is the first 'mega building' (meaning over 600 meters). There are 154 floors (plus some for maintenance purposes) that stretch up to a total height of nearly 830 meters. Our tickets took us on the fastest elevator in the world up to the 124th floor, which had an outdoor observation deck. We then took the stairs up to floor 125 for 360-degree views in which we could pin-point our building, our friend's apartment complex, and some other notable landmarks. 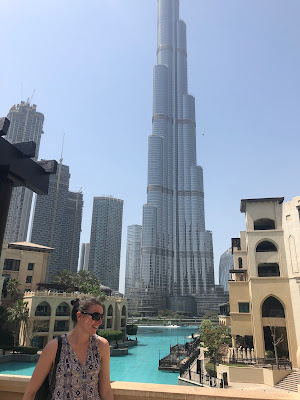 The building is so tall that it's hard to capture the full structure in a regular-sized photo. 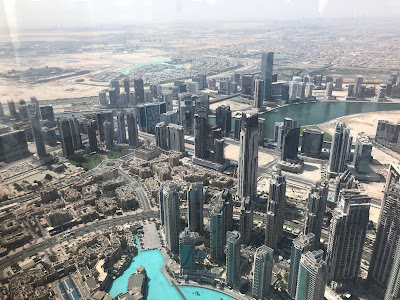 Views from the top show the bright blue waters of the Dubai Fountain, the dark colors of Dubai Creek, the numbers towers of Dubai's Business Bay, and the sandy beige of undeveloped land.
Safari: Taking a trip into the desert is one of the top recommended things to do, but I was a little disinterested at first, but it was fun. Our trip included a 45 minute drive to the desert, where we did 20 minutes of dune bashing, then were brought to the desert camp. At camp we were given the options to have henna done, ride camels, and take sunset photos in the dunes. As the evening progressed, we were treated to a buffet dinner paired with performances by a fire dancer and tanoura skirt twirling. 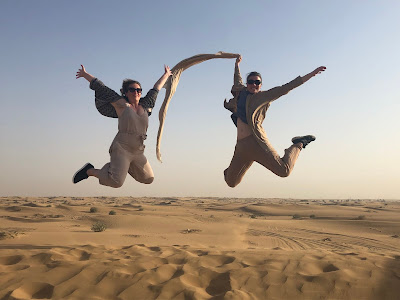 Partway through the dune bashing our driver let us get out to take pictures. You have to do a jumping photo when out in sand dunes!
Ski Dubai: What a wild ride! My friend rented skis and I started off on a snowboard for our two-hour tickets to the indoor ski resort. In addition to the one chairlift (which has access to a black slope) there is a poma lift (although it doesn't give you any additional access), plus two magic carpets for the bunny slope areas. Two hours was plenty: I was beat up after 1.25 hours of snowboarding and then promptly got bored once I switched to skis for the last half hour. But, I'm glad I got at least a little bit of skiing in this year. 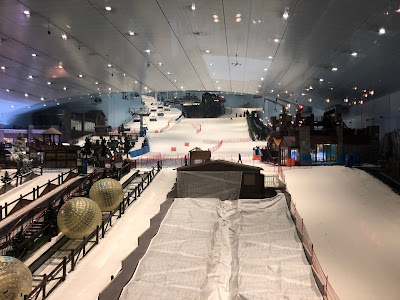 For the non-skiers, there are also a variety of slides, sleds, and zip lines to keep you entertained.
Dubai Fountain Show: 13 times a day the fountain comes alive with an elaborately choreographed dance. The song and dance change each performance, and we managed to catch four of them during our trip. It is the world's biggest water fountain, made even more impressive by the towering Burj Khalifa in the background. 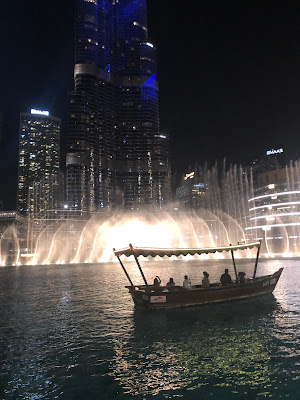 Our first visit to the fountain was my favorite. It was a beautiful instrumental French song, which paired with the water dance for a magical and emotional experience. 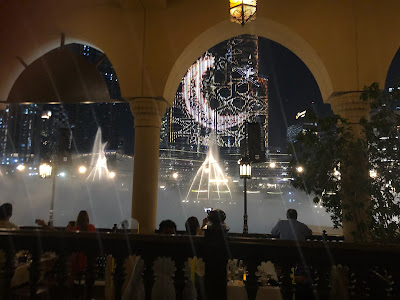 On our last night, we ate dinner on the terrace of a very fancy restaurant which gave us a great view. During the shows Burj Khalifa also lights up (in this photo with the Islamic moon symbol, which was very common during Ramadan).
Old Dubai: In an attempt for more 'cultural time' I dragged my friend along to Old Dubai, but I didn't have much guidance other than that. We ended up walking through the Spice Souk and Gold Souk, but it was overwhelming having all of the vendors walk up to us trying to get us to touch, smell, and of course, buy, their products. It was probably magnified a bit by the fact that Christina and I were some of the only tourists, so we attracted the attention of every vendor. After a bit, we took a water taxi (which only cost ~0.50 USD) to the other side of Dubai Creek. There we found a more peaceful (but also newer) part of Old Town to wander through. 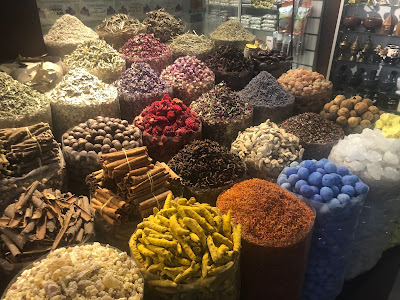 The spice vendors were eager to walk up to us and ask "do you know what this spice is?" I was actually curious to know about some of them, but I wasn't willing to get sucked into their sales pitch.
Dinner Cruise: We took an evening cruise along Dubai Creek. I wasn't sure what it would include, since it wasn't with the original company I wanted to book with, plus we were attending during Ramadan, which creates some restrictions. It ended up being very nice. We enjoyed a buffet dinner as we floated among some of the Dubai architectural feats and listened to Arab covers to popular American music. 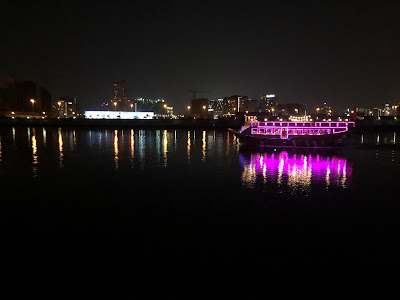 The cruise set out around 19:00, but dinner wasn't served until after sunset, in accordance with the Ramadan fasting practices.
Wild Wadi Waterpark: This was my favorite day of the trip! The park is themed after an Arabian fairy tale and has a good mix of fun and thrill. It took us a while to find the starting point for any slides, but once we got the lay of the land we stayed busy buzzing around the park all day. My two favorite rides were bit raft-style ones, but neither were the most notable parts of the park. Before this, I had never heard of an uphill water slide before! You would nestle into a tube that then got pushed up a roller coaster-like ride, and then you could slide down a variety of routes. At the end you'd be split out into the lazy river and could stay in your tube as long as you want. 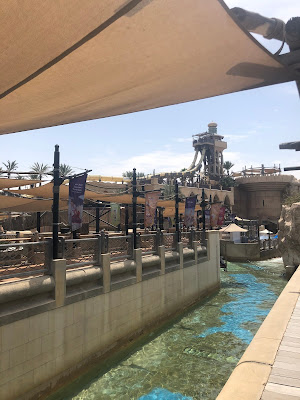 There most extreme slide at the park was Jumeirah Sceirah, in which the floor drops out from under you to send you zooming down a 6-second zipper. You can see this slide's tower in the background of this photo.
The Food: Everything you could possibly want restaurant-wise can be found in Dubai. We had local Arab food for one meal, but it was easier to find American-style chains, like Rainforest Cafe and Joe's Crab Shack, than to find a locals only-type place. The thing that really one me over, though, were these baby foods branded "For Aisha." 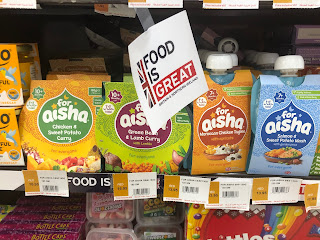