We just ended our four week stint of back-to-back guests. I'm learning that my social skills have atrophied in the past two years, and my need for nothing time has increased tremendously. To those who have spent many hours in airports and the money to visit us—thank you! I'm so happy to have hosted you, and I apologize for my particularities.

There have been some repeated activities across the sets of visitors (Bubble Kingdom, Youmiko Sushi, and Nolio Pizza are top culinary attractions), but I've been quite pleased to enjoy some new experiences. Although I don't necessarily want to make multiple visits, I have a few new recommendations to visitors and residents of Krakow:

1) Most tourists have heard of the Wieliczka Salt Mine. It is an easy 30-minute bus ride from my house, and it is only accessible through a 2-3 hour guided tour. I had fairly neutral expectations based on my friends' word-of-mouth reviews, and my expectations went down slightly when we arrived to a chaotic bundle of tents and lines at the Daniłowicz Shaft starting point.

My worries were short-lived, though, when I realized the line for those who had purchased tickets online was only one-person long, and the surface-level bathrooms are free (a big deal since Mom & Dad were swiftly using up my coin stockpile). The tour started punctually, and the four of us (Mom, Dad, Cameron, and me) were herded into a building with 24 other tourists and our smartly-dressed tour guide, Agnieszka. After a brief introduction of the mine (subterranean temperature of 18°C, walking 3.5 km, 800 stairs, 135 meters underground) we began our first descent. 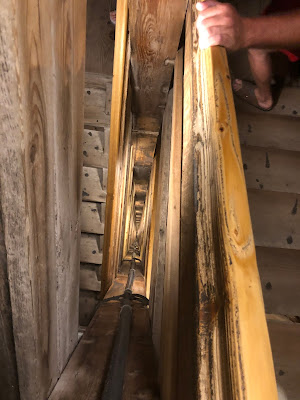 The first 380 stairs down the shaft, brining us 64 meters deep.
Once inside, we walked through a series of tunnels, widened by the modern mine staff and fortified with many long logs. Agnieszka kept us moving but would stop periodically at a constructed display or a statue carved from the "green" salt. We learned about the 700 year history of the mines and its current position as a historic monument. We learned about the miners and horses that were working the miners, and we saw the creative and spiritual outlets the miners created for themselves. Cameron and I even had a little taste of one of the (many) salt walls. 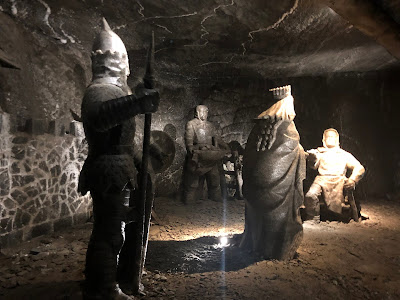 Most of the displays were a little cheesy, but knowing that all of the carvings we saw were done by the miners made them seem much more impressive. You could tell the age of some by the way they were beginning to seep.
By far, the most impressive areas were the giant cathedral halls and the underground salt lakes. The halls were filled with intricate carvings and massive chandeliers. Many of the sculptures were backlit and made even more impressive by the shaded light filling the salt structures. The lakes, although not large, were beautiful jade-colored, offset by red wood stairways or white crystalline salt. I handed out groszy (pennies) and we threw our wishes into the water. 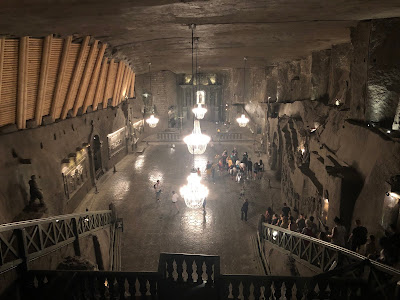 This grand cathedral hall is made even more impressive by the knowledge that this room was fully carved out by hand. 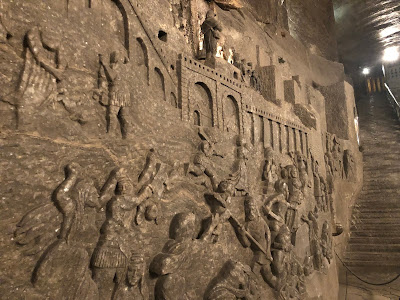 One of the many Bible scenes carved into the side of the cathedral. The orange-ish light from the center of the work is a lit-up baby Jesus. 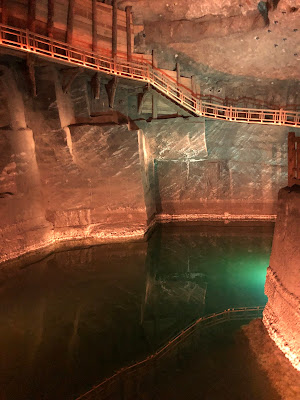 One of the bigger and prettier underwater lakes.
In addition to the main tour, we extended our visit and walked through the underground museum. The extra hour provided some supplementary information and an opportunity to ask one-on-one questions of Agnieszka. The trade off was that we missed out on a ride up the older elevator, but the extra time and information was worthwhile. Although I don't feel like I need to see the salt mines again, I'm glad I did at least once. If I did go a second time, I might eat in the underground restaurant, just to say I did.

2) Cameron and I considered visiting the Stained Glass Workshop and Museum once before, but I had a cold and we thought it would be best to avoid close contact with other people. Instead, we walked around the city and did a self-guided tour of their recommended stained glass exhibits across the city. It is worthwhile if you are looking for a way to pass a few hours, but the self-guided city walk was nowhere near as interesting as visiting the workshop and museum. 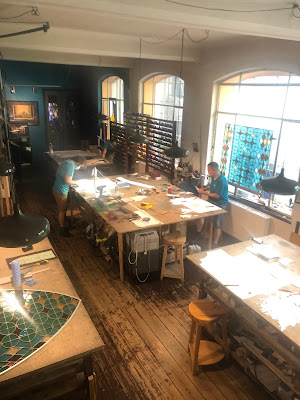 The first floor of the workshop is used for color decisions and glass cutting. 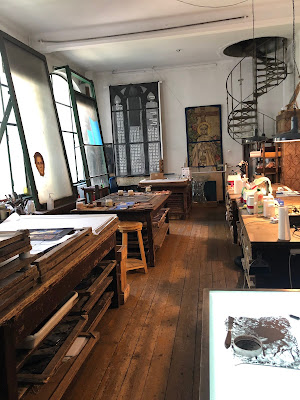 The upper floor has the ideal light for painting, so that is its primary use. The face on display to the right was our masterpiece.

The studio has been in operation for over 100 years, and we learned about the processes of glass working as we walked through the workshop. As our guide educated us, there were a number of employees actively working on commissioned pieces, giving us a real-time visual of the process. We even got to try our hand at glass painting (which is actually done through the process of removing paint rather than applying paint) on a life-sized face that was cast ofter after it was deemed "too dark" for the final display. 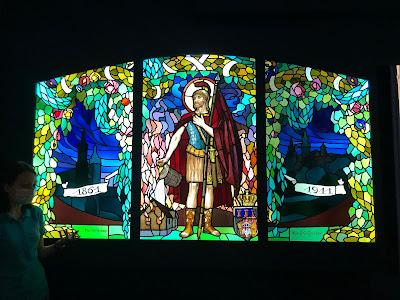 Look at how beautiful those colors are! I also love the Stary Night-esque background behind two of Krakow's most recognizable buildings. 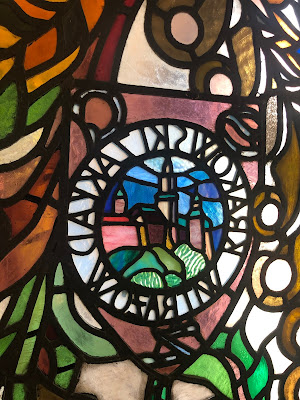 The symbol of the workshop.
The tour ended in a gallery displaying some of the most intricate and stunning pieces of glasswork that I have ever seen. Although I can appreciate Chihuly's skills, I was more impressed with the works of Stanisław Wyspiański.

3) My whole time in Krakow I have lived within a 15 minute walk to the Dobra Atmosfera observation balloon. Every day it goes up and down on a tethered cable, so long as there is no inclement weather, taking passengers 150 meters up. As a delayed birthday present for Cameron, we finally went up. 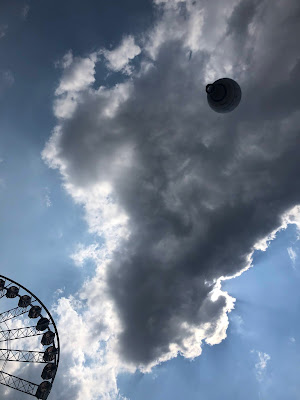 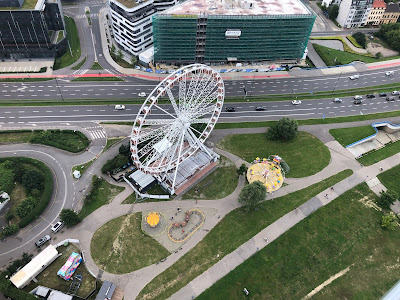 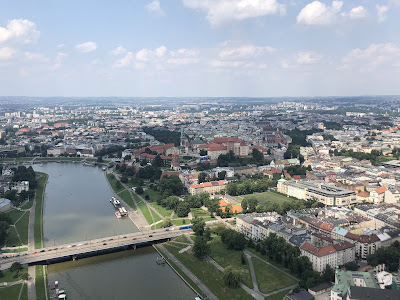 Wawel castle is of course the most architecturally interesting structure on the near-horizon. 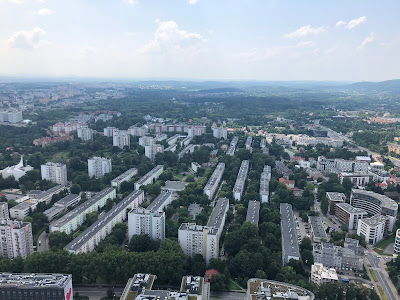 The southernly horizon. Those with good eyesight might spot Tyniec Monestary. I spy my house!

There isn't much to say, given that it is pretty much exactly as I expected: a pretty view of the city and beyond. I expect if you go on a particularly clear day you might see as far as the Tatra Mountains, but looking straight down is more exciting for me than the stretching vista. It was a little expensive, especially since you can get pretty good views from the mounds or from climbing one of the city towers, but it was really fun to see our city from a different perspective.

4) Lastly, the Pinball Museum. Cameron had gone once before, but I had never been. Now I've gone twice in less than a week! 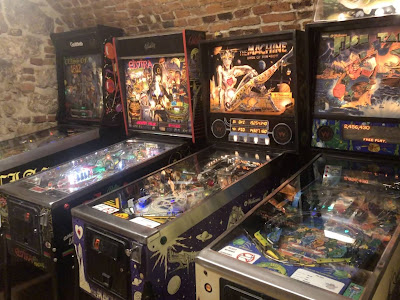 The whole space is just a series of small rooms filled to the brim with pinball machines.

For 50 złoty, you can have unlimited play time on the hundreds of arcade games they have. Most are pinball machines, but there's also Pac Man, Asteroids, a driving game, and some shooting games. The oldest machine they have dates back to the 50s, so it's really cool that they still let you play on it. It's fun to see the evolution of pinball through the decades. The '80s were clearly the peak pinball years, with bells and ramps, and in-game goals. 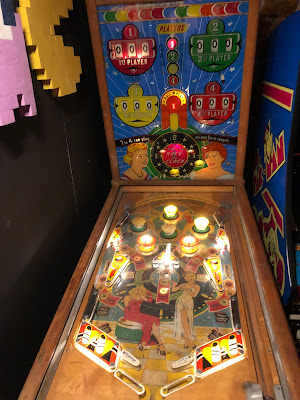 This was the oldest game I played. If I remember correctly it dated back to 1955! 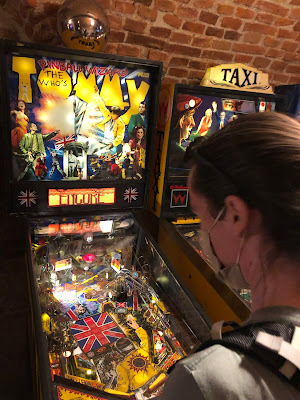 Of course there is a pinball machine based on the game Pinball Wizard, which is based on playing pinball. This so happened to be one of my favorite games. 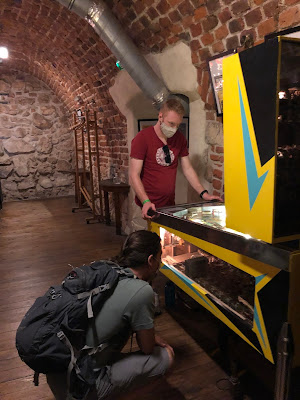 One of the machines had a glass side so you could watch the literal bells and whistles. Brad's playing while Cameron investigates. 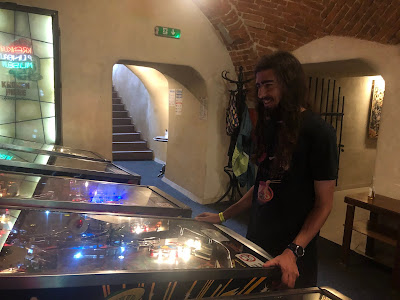 Ryan, another one of our happy guests, searched online for the best pinball games. Quite a few of the top rated ones were available here. 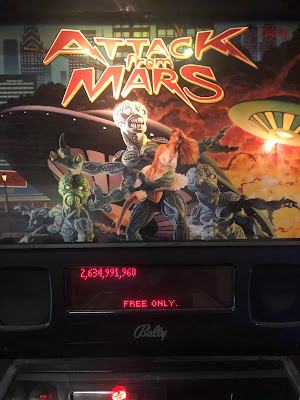 This 1995 game was my favorite...maybe that's because my score was over two billion.

Having an unlimited pass really helped reduce the stress I normally get at arcades of not wanting to waste my money on a game that I won't like or will immediately lose. It also allows you to play a ton of games, or to play the same game a few times in a row so you can better appreciate the nuances of the game play; I even got to enter my initials to the leader board for one of the games! This was a lot of fun, and I wish I had been going more often while I lived here.