Nowa Huta (literally translates to "new ironworks") is a district of Krakow, but was designed to be a separate city. Before construction started in the 1950s, the area was mostly just agricultural land withs some sparse villages sprinkled throughout. Since the end of communism, it has stayed as a semi-desirable neighborhood, especially for those who want affordable housing with lots of parks and parking. It was, after all, designed to be the ideal community.

Our walking tour started in Central Square, from which the pentagonal blocks unravel. The shape was thought to be the best protection against nuclear warfare, and for additional protection many of the buildings have sniper walls built onto the roofs. Each segment forms its own self-contained fortress, with everything you would need to survive in case you were blocked in: a grocer, some greenery, a bomb shelter...

The first layer of Nowa Huta was hastily constructed, in an attempt to prove that it could be done. Plus, the Soviet Union needed steel, and the residents of Nowa Huta were expected to produce it in the nearby Kombinat—the steelworks company that was also newly constructed in 1954. Due to the haste, culture and beauty were left off of the checklist of new city necessities. There were a few "decorations" on the archways and columns, but for the most part the buildings all were stereotypical Soviet Bloc concrete slabs.

With each new decade, there seemed to be a new leader of the "city" (which was quickly downgraded to be just a sub-district of Krakow) and a new set of ideas of how Nowa Huta should be designed. As you move further from the center, the architecture changes and you start to see the inclusion of some of the initially overlooked items: parks, art (i.e. statues of communist leaders), a restaurant, a theater, and (towards the end) some churches began to be allowed.

In 1989, the bronze statue of Vladimir Lenin was dismantled in a protest, and in the same year Communism officially ended in Poland. The continued construction of Nowa Huta left the area in debt and with a need of a cultural shift. Many of those working at Kombinat were left looking for work. It took until the time Poland joined the EU in 2004 before things were relatively stable.

These days, many of the street names have been renamed to honor modern idols (like Pope John Paul II) and the steel plant was purchased by a foreign company and now employs ~40,000 people. The place that was intended to be a cookie-cutter model for many future cities ended up being quite unique; it is only one of two planned socialist settlements ever built. In some ways it succeeded, as a large portion of the population who lives have been there for decades and are now, in their retired years, enjoying the benefits of the community that never quite came into fruition during the 40 years of communism in Poland. 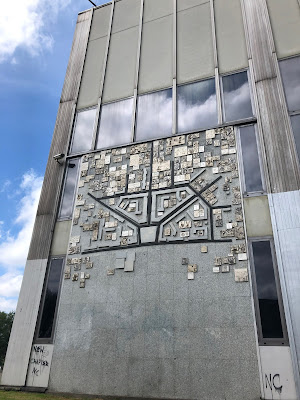 This mural shows the outline of current Nowa Huta. The dark outline of the pentagon shape was from the first wave of architecture (starting in the mid-1950s). 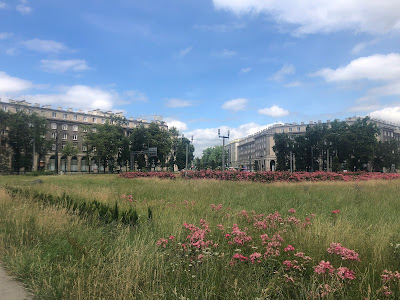 Central Square is literally the square at the center of the mural, above. It is also where we started our tour. 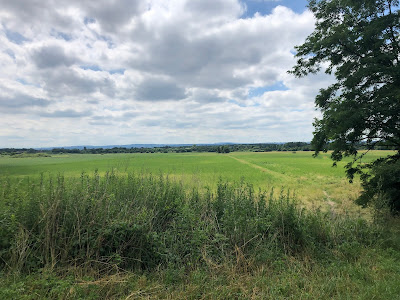 Just on the other side of the street from Central Square is this large field; a visual representation of what Nowa Huta was built from. 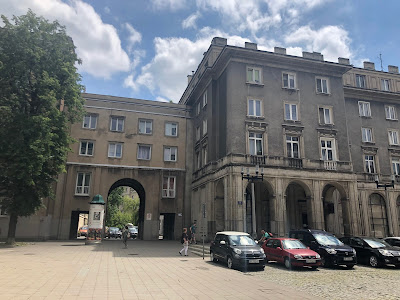 Some of the more decorative early buildings. The regularly-spaced square blocks of concrete at the top of the roofs on the right are protection for snipers. 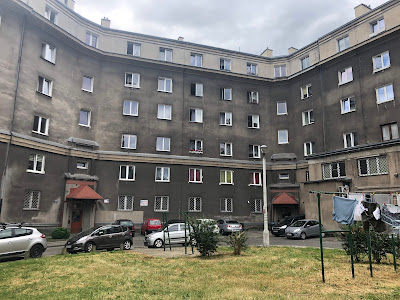 Inside one of the many identical city blocks. These were self-contained and fortifiable. Spying on your neighbors was encouraged, as evidenced by the building's shape, and the communal laundry lines. 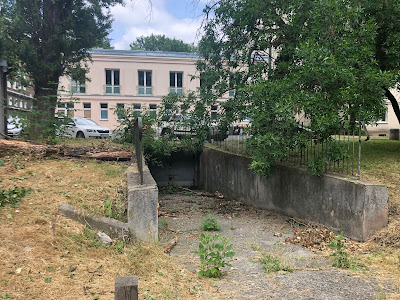 A bomb shelter was located within each block. The pink building at the back is part of a new batch of construction from the 1960s. 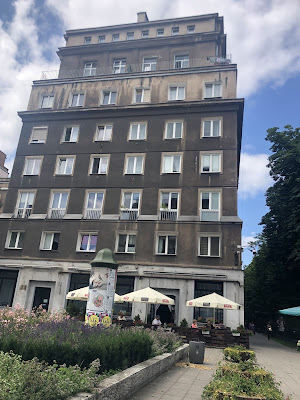 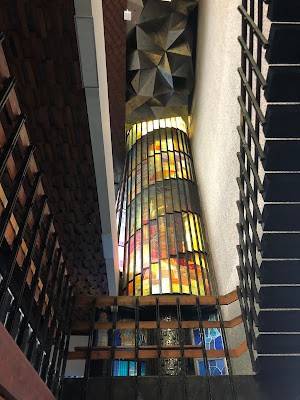 The final stop on our tour was a beautiful church, Church of Our Lady Queen of Poland, which was built in the the '60s/'70s. It took a while before the communist government approved the construction of a church, and those asking for it were told that they had to fund it and source their own materials. The result is perhaps the most stunning church in Krakow.
Posted by Aisha at 9:14 AM