School ended July 26 for all of the Polish children, and there were some pretty clear clues last week that the kids were transitioning into summer: longer lines for ice cream, bigger groups of students prowling along the Vistula, and playground noises wafting into our flat later into the evenings. I get the sense that the last week of school is mostly a time to cram in a final field trip, which is something my friend and I did not account for when we decided to go to Energylandia last week.

Ooh we thought we were so clever! She took the day off of work and I shifted my hours so that we could go to the amusement park during the week. Monday was going to be hot, but not as miserable as the preceding days, and we figured we'd have the place to ourselves since the kids were still in school. Both Ola and I are planners, so we independently looked up what to wear to an amusement park and felt very prepared.

The traffic for the last 10 minutes of travel was a little unnerving, but I though it might just be tour buses on the way to Auschwitz, or maybe the small town we were passing through had an unusually intense rush hour. When we arrived at our destination we realized the traffic was all heading the same place we were, and the lot was already half-full even though the park had only been open for 15 minutes! The ticket courtyard was the most crowded space I have been in in two years, and the school kids had no sense of social distancing or proper mask etiquette.

Although a little overwhelmed by the crowd and noise, the entryway brought back happy memories of Europa-Park, Six Flags, and Holiday Park. I was giddy and bemused by the overly-enthusiastic statues near the entranceway. As with anything like this, it took us a while to catch our bearing (No, we don't want to be at the waterpark, nor the kids section. Can we find a bathroom? And how are we supposed to pay for the lockers?) but we finally found our way into the Speed Water Coaster line.

The ride was aptly named, because after a whooshing drop and some thrilling turns, we were blasted with a wave of water. It was great fun, and the only ride we went on twice over the course of the day. My other favorite was the Zadra wooden coaster, which had some unexpected upside-down moments, but the other two biggest coasters—Hyperion and Mayan—were a little too zippy for me.

While it was more crowded that we expected, it was very clear that the park is designed to handle at least twice as many people. Even so, we were waiting in line for at least 20 minutes for each ride, so we only went on eight over the course of the day. When at the top of some of the rides, we could clearly see a few sections of the park that are still under construction; I'm not sure if the new attractions will help spread out the crowds or just draw in more visitors.

Despite the queues, people, and heat, I really enjoyed myself. There were lots of areas of the park we didn't see (including all of the shows and the water park), so I'm sure I would find Energylandia equally fun and novel if I got the opportunity to visit a second time. If you are looking for something to do the next time you play hooky, riding the roller coasters is a pretty good option. 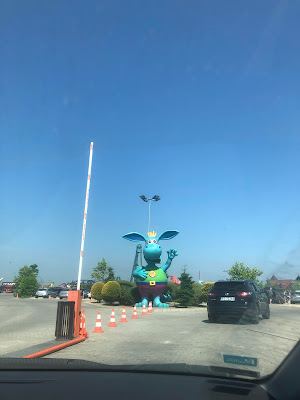 Look at this little cutie, who greets you as you enter the parking lot. I know he's there to get the kids excited, but he charmed me as well. 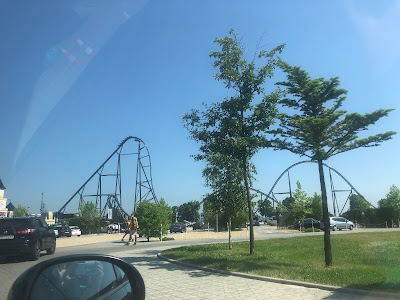 Hyperion, the tallest, fastest, and longest roller coaster in Poland is also visible as you start to drive up. The cars were already rolling by the time we arrived. 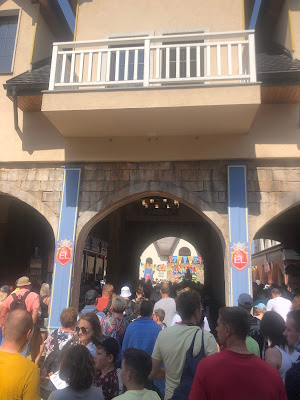 First entering the park required some crowd navigation, but once inside it was reasonably easy to stay spread out. 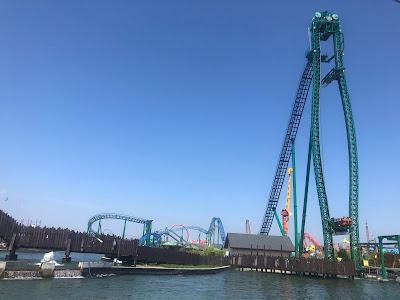 The Speed Water Coaster was our favorite. Your boat is lifted out of the water to zoom along the coaster tracks before ending with a big splash. 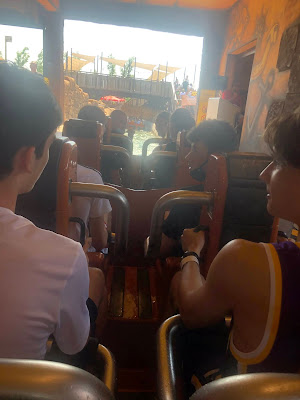 People were supposed to wear masks in lines and on rides, but virtually no one was doing that. I attempted to wear a mask, but as soon as I opened my mouth the scream it caught the wind and stayed hugging my chin on every ride. 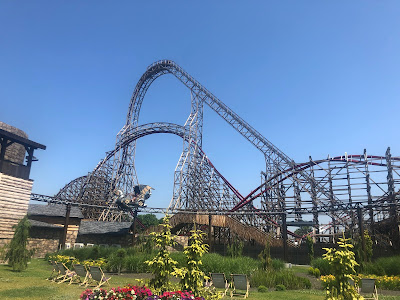 The wooden Zadra coaster is in the Dragon's Lair part of the park. 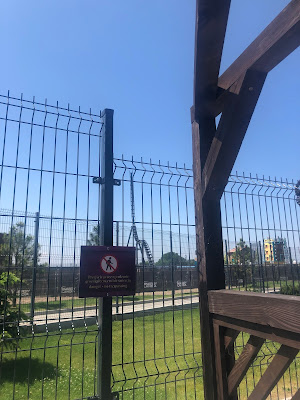 Construction going on in the distance. it looks like the new Aqua Lantis is going to be really fun, and will have another big water coaster. 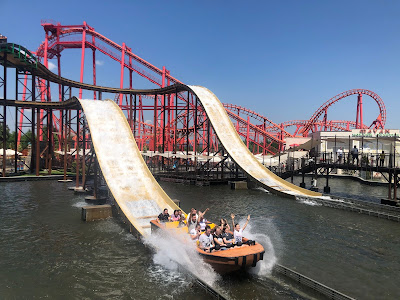 A somewhat disappointing Jungle Adventure—you got splashed more waiting in line than you did in the boat. You can also see the fairly large Mayan roller coaster in the background. These poor people were in full heavy costume in the heat of the day. It was nearing 30 degrees Celsius/90 degrees Fahrenheit. Needless to say, they were not moving very enthusiastically.
Posted by Aisha at 8:24 AM