Last week I wrote about the newly enforced red zone rules. As of today, we are now in red zone 2.0. The red zone restrictions are now in place all across Poland, and they are even more strict: restaurants are only open for take out and delivery, public gatherings are limited to five people, and schools are now all virtual (with the exception of a few grades). I tried to convince Cameron to go out to dinner last night for one last hurrah, but he is Mr. Safety and asked that we avoid being reckless. I did happen to have dinner with some friends on Thursday, before any new restrictions were announced, so I feel like I managed to slip in my own little final hurrah.

Coronavirus definitely feels like it is hitting closer to home this time around. Two of my friends had to cancel on me because someone in their vicinity tested positive, and I just learned that some of my coworkers had gotten sick. Apparently one of them had his wedding a few weeks ago, after which he, his wife, and 40 of their guests left with a new friend- Miss Rona.

Clearly, the Polish government is trying to regain some control, but they don't know exactly how to go about it. To compensate, they're taking it out on women's rights.

On Thursday, it was ruled that abortions due to birth defects are "unconstitutional." Poland had already limited just a bout all other abortions, with only about 1000 legal abortions conducted last year. I know Poland is not my country, but it still is bad news that now gets to take up space in my brain. It is infuriating and tactless that someone decided that now is the time to drop this bomb.

My Facebook today if filled with commiserating posts, red lightning bolts, and messages of "piekło kobiety," "wybór nie zakaz," and "to jest wona" (roughly: "beautiful women," "don't forbid choice," and "this is war.") Last night there was a women's march in Old Town. People were encouraged to wear black, bring signs & coat hanger, and of course wear a mask. Had I found out about it sooner I might have gone, but the subsequent videos are ominous, largely because it gets dark by 17:00 (although Poland daylight savings time is tomorrow). The dark mood was intended to convey "a funeral for women's rights." I haven't heard any negative repercussions from the Krakow march, but I know the Warsaw gathering included pepper spray and arrests.

Well, I suppose I should end it on a good note. Hmm, let's see...the final presidential debate wasn't as shouty as the first one? Uh...my client who can be a bit of a bully was actually really chill on Friday? I really love having a dryer again and being able to hug newly dried warm clothes? Eh, good enough. 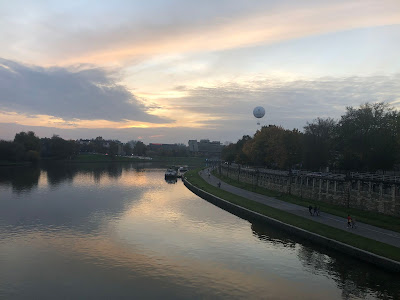 The smog at least makes for pretty sunsets (this was taken at 17:30 last night. I snuck out of work a little early to get a walk before it turned totally dark.) 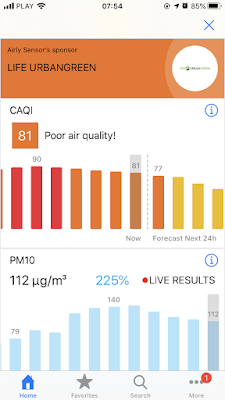 Every day starts off by checking the Airly app to see what the air quality is. I try to not go outside unless it reads 50 or less, and I won't go on a run unless the meter is green. 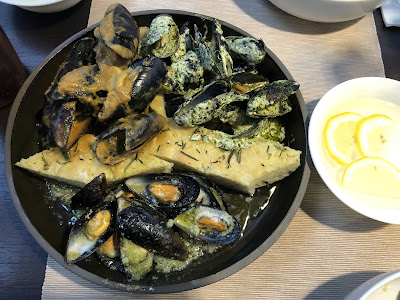 A friend and I met up for a mini muscles fest on a boat last weekend. There's lots of boat restaurants along the Vistula, but of course those won't be accessible for a while. 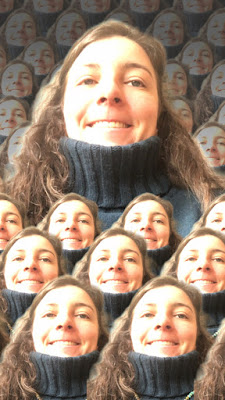 And to end with a winner...this is what I do when I'm trying to entertain myself during the work day. I should be better at working from home now that it's been over half a year but it feels like it is getting harder and harder to stay focused.