This is my first (and only) Polish Halloween since last year we actually were in Seattle. Cameron and I are starting the day off by watching Poltergeist, baking a pumpkin pie, and eating peanut butter M&Ms. Not that Halloween is much of a Polish holiday, but still there were a few shops in the mall selling small costume pieces, a few produce stands sell larger carving pumpkins (not that I've seen any jack-o-lanterns), and my Toastmasters club is even encouraging people to dress up since we have an online integration party tonight.
There are two other holidays this time of year instead- All Saints Day on November 1st and All Souls Day on November 2nd. They are somber days to visit your your buried loved ones, although the government just announced yesterday that cemeteries will be closed this weekend to avoid unnecessary Covid spread. I haven't heard if the St. Casimier Church 's catacombs would be open on All Souls Day for the annual viewing of Krakow's mummies.
That's right, Krakow has about 200 mummies. There was once about 1000 but apparently once they started opening the crypt to the public all of the breathing created enough atmospheric change that many of them started to decompose. Now, they limit the visitation to one day a year and I want to go!
I might be getting some of the facts wrong, but it was late at night when I heard them. A few friends and I went on a free walking tour Thursday night. In the spirit of American Halloween we set out at 20:00 for A Walk with the Dead. Yes, there were ghost stories and and historical lore, but you will have to come visit me and take the tour yourself to hear all of the tales. I'll just share one more of my favorites. Again, apologies if these factoids are at all inaccurate.
Early on in the tour we pondered why there are 100+ churches but only ~3 cemeteries in Krakow. Well,  sounds like most of the open spaces, other than the main square, were cemeteries that got covered over by the Austro-Hungarians at some point in the city's history. Most of the bodies were removed before renovations, but not all of them. The ones that were left were often buried 20 feel down rather than the standard 6 feet. Why? So they could wake from the dead.
These bodies were not only buried deep down, but also in strange orientations: heads between their legs, stakes in their skulls, and stones in their mouths. These were vampire burials. The modern day word, "vampire," likely comes from the combination of the Slovak word Wurdulac and Polish word upierzs. Who were the vampires? Likely people who suffered from acute anemia, a blood disorder that makes you very sensitive to light, red eyes, and a general discomfort that can sometimes be alleviated by consuming raw flesh. Before modern medicine, these people were outcasts of society, living on the edges of society and only coming out at night. Since it's a heredity disease sometimes whole families lived like this. They probably were only seen out of the corner of another's eye snatching up small animals or livestock and eating them live.
Another highlight of the night- I got to share a favorite joke from middle school, so I will leave you with the same: two grave robbers dug up Bach's grave after hearing he had been buried with heirlooms and riches. When the open the grave they found him sitting up with a lit candle and erasing his compositions. They were startled but had the wherewithal to ask "what are you doing?" He responded, "I'm decomposing." 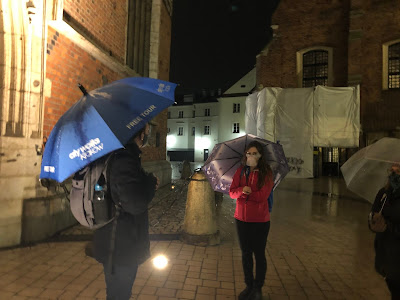 We started the tour at St. Mary's Basilica. This little square we were standing in is one of the paved-over graveyards where vampires were found. 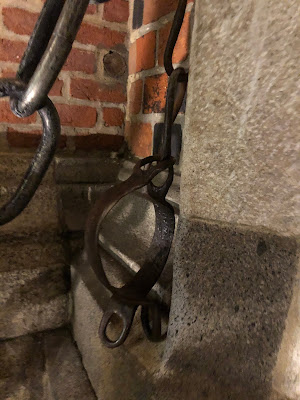 Those who were being temporarily punished (either for a night of drunkenness or the last night before the gallows) were shackled by the neck outside of the church in the uncomfortable height where you can't sit nor stand. 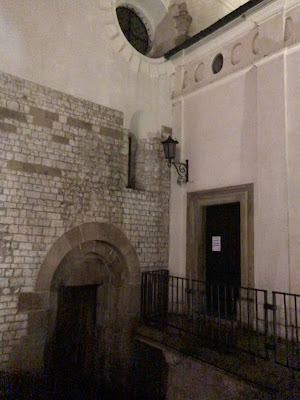 We also were told about a convent in which the Mother Superior hid one of the nuns in the basement for over a decade after that nun tried to leave the convent because she fell in love with one of the local men. 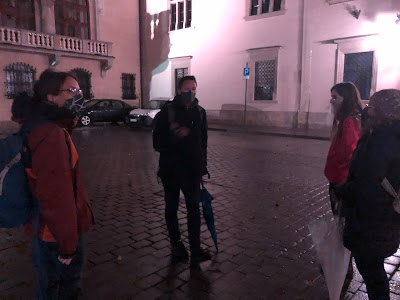 Groups are limited to five, so there was me, two of my friends, the tour guide, and a German woman delaying her trip back home since she wants to put off a 14 day quarantine. 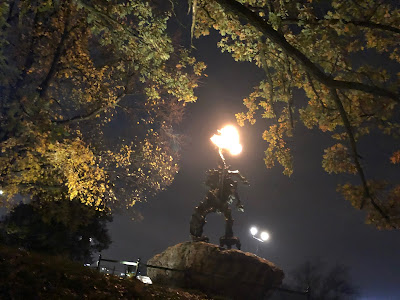 We ended up at the dragon's lair at Wawel. No surprise that after 1000 years of royalty buried on the castle grounds there are plenty of ghost stories there but you'll have to take the tour yourself to learn more.
Posted by Aisha at 6:48 AM