Wybór i Zmiana- Choice and Change

This week has been a big one for everybody. I don't have to tell you that this presidential election was a high-emotion event with alternating ups and downs. Being 6 hours ahead of Eastern Time I felt like I was living in the future, even though I was subject to the same updates of everyone else. I would read news updates that said "Pennsylvania expects to release more count results in the morning" and I would scream at my computer "It's already noon! It's past morning!" I know, a very unfair argument, and an argument I did not win.

The Polish reaction would have been funny, if I hadn't been so frazzled already. One friend from Toastmasters said it was like watching a tight football match that her team wasn't playing in. My manager was giving me updates- he paid to have CNN on his TV and I was subject to the delayed written updates. Yesterday, Saturday, we were talking to Cameron's coworker and he asked who our president was. We had to begrudgingly laugh and and throw up our hands in a "we don't know" shrug.

I know things won't change immediately, and at best we have months to wait. Likely, things will get worse before they get better but I'm hoping a change in president might make it possible for international travel this spring. I also, of course, think this an important step for the environment, immigrants and refugees, and woman's rights.

Speaking of woman's rights, the Strajk Kobiet, is still going strong in Poland. To do something on Election Day, I went out for a Tuesday evening protest-ish event. Me and my 2000 closest friends grabbed flashlights and masks and gathered in Błonia, a huge open field. Volunteers had already taped off a massive lightning bolt and the word "WYBÓR." It was too crowded to keep the 1,5m distance, and I was worried that the omnipresent police would try and break up the group but they were mostly just curious bystanders. I even saw one officer pull out his cell phone and take a personal video.

Although I was there to support the movement, I also went with an archeological curiosity. I know this is not my fight–I'm not a voting citizen of Poland–but I wanted to show my support. Also, I felt some level of obligation to go to something but the more traditional protests with chants and marches seemed a little too high-intensity for me. Even if the chances are slim, I would rather not end up in Polish prison. But, they are making a difference. When you have thousands and even hundreds of thousands of people demanding change every night for weeks on end it is hard to ignore. Earlier this week, the Polish government announced that they were delaying the implementation of their previous decisions about abortion. Some feel it is too little too late but I'm honestly impressed to see social movements create any impact. It's not over yet, but it seems like a positive start so far. 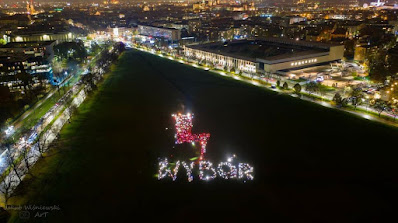 This was the end result. I was one of the lights near the top left corner of the lightning strike. 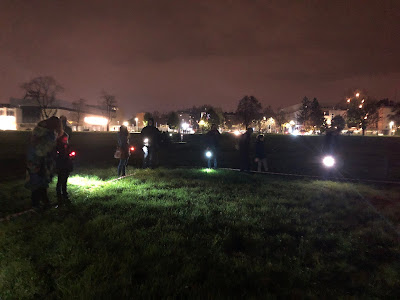 I was one of the first people there and didn't really know what to expect since I hadn't been to anything like this before and I couldn't understand what was being projected through the megaphones. 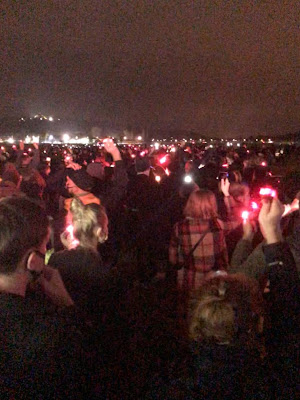 It filled up though! I know my photos aren't great qualities but I love that Kościuszko Mound was lit up as a backdrop. 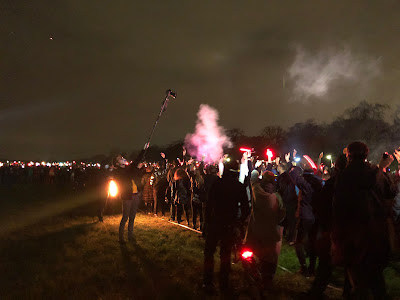 No surprise, there were some news groups with big cameras and professional microphones walking around the perimeter of the protesters. 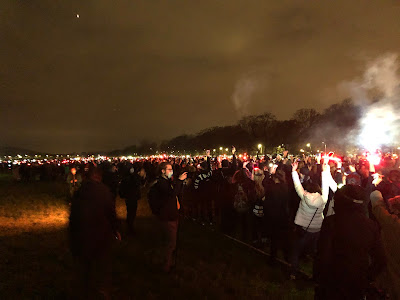 Like I said, there were probably around 2000 people there. That light you can see in the sky was one of at least seven drones flying around. 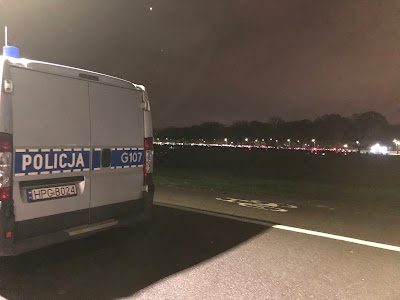 There were police officers all around the premises of the park. If you look back at the drone photo you'll see some streaks of blue outlining the park.

And there was another positive start this week- this one a little less wide-spread. Yesterday we attended a wedding! *cough cough*- I mean a socially distanced religious ceremony that just happened to include 1 Corinthians and someone who chose to wear a white ballgown. Well, we at least assume it was 1 Corinthians because we heard a lot of "miłośś jest..." (love is). I also picked up the words for "God," "father," "son," and "world" (or "saint," the Polish words are very similar sounding).

Thanks to my cousins' weddings, I knew what to expect out of a Catholic wedding mass, and it turns out a Catholic mass is a Catholic mass whether you are in Flagstaff, Arizona or Kraków, Poland. We did however miss the first two or three minutes. Cameron insisted that we did not need to arrive before 14:00, but when we arrived at 13:57 the bride and groom were standing at the front doors waiting to walk in–whoops! Luckily thanks to Covid restrictions (not a phrase you'll hear anyone say often) there were plenty of empty pews to sneak into.

I did catch a few differences, which most likely were Covid-related but I suppose they could have been indicative of different cultural traditions. During communion, the priest dipped the cracker into the wine, so no one was drinking out of the same glass. Other than the couple-of-honor, only three people went up to take communion. The "peace be with you" section included a few side-to-side glances and nods of recognition but no actual talking. From what I could tell no one was singing along to the hymns even though the lyrics were being displayed on a screen at the front of the pews. There was a quick and modest first kiss. At the end of the service some people took cues to leave their seats and rush outside to cheer the couple as they left the church, though Cameron and I were not so quick to catch on so we stood and clapped from our row.

It was clear that the couple and their families were excited and relieved to finally have this wedding. From what I was told, this was one of many contingency plans and there was worry up until the end that the rules would change yet again and lead to another cancelation. I jokingly told Cameron that if our wedding had been disrupted so many times I would have accepted it as fate at this point that we weren't meant to get married. I guess lucky for Cameron, we got married before Covid was a thing that existed in our world.

It was a really lovely ceremony, and helped me to fulfill my #1 Poland checklist item. I can now say I have attended a Polish wedding and can move back to the United States with no regrets. Plus, this wedding was a beautiful and tangible way to celebrate a weekend that will be monumental in my memory for a long long time. Cheers to the happy couple, and cheers to the next four years for the USA, and of course the lifetime of the couple! 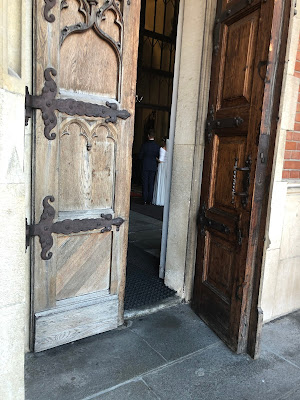 Happy wedding. We got a sneak peak of the bride and groom since we were running late. 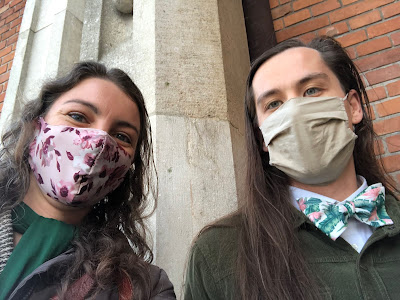 Waiting outside gave us time to take a selfie though! If you are a careful observer you might see that the dress I am wearing is actually one of the dresses I had my bridesmaids wear for our wedding. 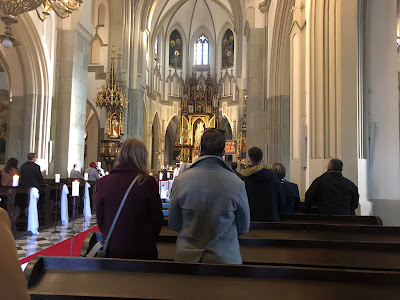 This church is one of the most beautiful in the city, even though the inside isn't quite as extravagant as St. Mary's Basilica in Old Town. 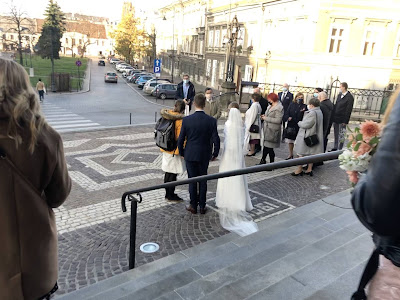 They got lucky with beautiful warm (for November) weather. That's surely a good omen!
I did some research about Polish wedding traditions, and one thing I learned is that it is good luck to get married during a month that has an "R" in the name. Unfortunately November, listopad, is not a lucky month. 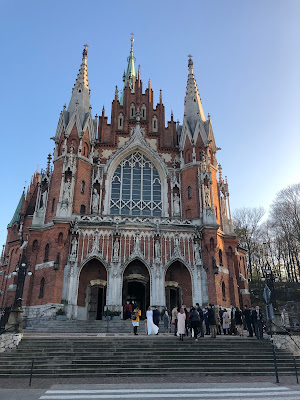 Like I said, it is one of the most beautiful churches in Krakow. Gratulacje!
Posted by Aisha at 8:27 AM