Cameron and I celebrated Thanksgiving a week early, mainly because that's when we took time off and I wasn't about to cook a multi-course meal on a workday. On proper Thanksgiving, I mostly forgot it was a holiday until an occasional "Happy Thanksgiving" text message popped up or I saw someone's Instagram story about turkey prep. The rest of my day was pretty stressful, so the reminders that everyone in the US were celebrating a day off was a little disorienting.

But our premature Thanksgiving was great! It's always fun to have an occasion to make a fuss over, but part of the fun of fussing is hosting other people. We were hesitant about having anyone over, and went through the same logic loops as everyone else surely does these days around social engagements.  Ultimately, we felt more pull towards social celebration so we conceded to the five person group legal limit.

While two of our guests were American, it was one person's first Thanksgiving. I'm pleased to say that we showed him a pretty good feast! Cameron made turkey, turkey gravy, brioche rolls, and pumpkin pie. I prepared cranberry sauce, mushroom gravy, mashed potatoes, Brussels sprouts, butternut squash soup, salad, salad dressing, and whipped cream. All of that was supplemented by our friends' dishes: roasted yams, green bean casserole, and apple pie. I'm sure I said it last year, but this year it's even more true- I'm pretty sure this was my favorite Thanksgiving meal I've ever had!

Like any good Thanksgiving, we had a little drama. Right as our friends were arriving a huge splash of water (maybe 2 liters) came out of the living room ceiling lamp. I was trying to not burn my Brussels while looking for an unused bowl we could put under the continuing drip. Cameron started sending photos to our landlord while one of our Polish-speaking friends and I went upstairs to talk to our neighbors. No one answered the door and it didn't seem like we needed to expect a second wave so we went on with the rest of our evening.

We found out the next day that there was a burst pipe upstairs, but that we shouldn't have to worry about additional leaking. The only thing we had to worry about was the grinding sound of construction the whole next week- that surely didn't reduce my stress levels!

But back to Thanksgiving. Clearly, it is not a celebrated holiday in Poland, but many of my Polish friends and colleagues know of the holiday's existence. However, other than a few glimpses of it from American media, most people don't really know what the point is. Although they are British, not Polish, I would very much recommend listening to the Birthday Girls House Party podcast episode on Thanksgiving if you want a laugh about what foreigners think about our American traditions.

Despite asking me for my thoughts on the holiday, I don't know what to tell people. It's a long conversation to talk about the controversial history and I haven't done enough research of my own to give an educated summary. Instead, I give the same white-washed answered everyone else probably gives- simply that it's a holiday to celebrate family and give thanks. And it should be about just family and thanks. So for what it's worth- I'm thankful for my health, my family's health, and an optimistic outlook for the future. 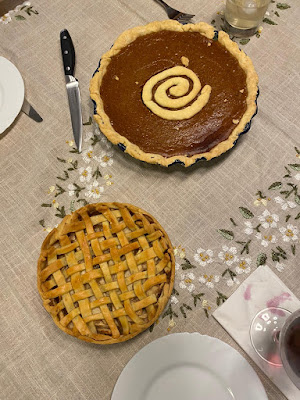 The most important part of Thanksgiving is the pie- I'm glad we had two! 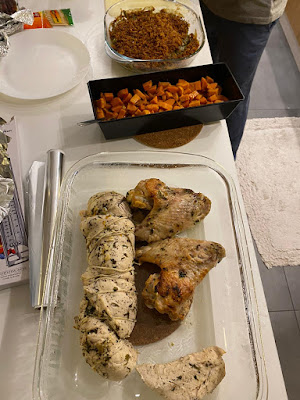 Cameron made turkey for the first time. It was a little bit of a challenge finding turkey. I probably could have ordered a full bird from a butcher but was happy to settle for some big cutlets from the refrigerator section of a not-so-near grocery store. 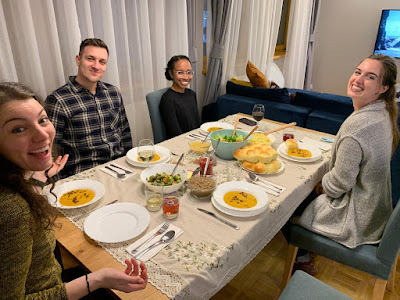 It was great to have a proper feast. 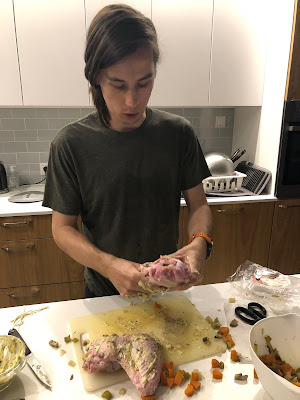 Cameron prepping the turkey. I refused to touch it. 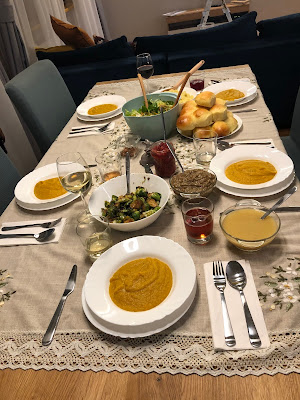 Some of the food on the table... 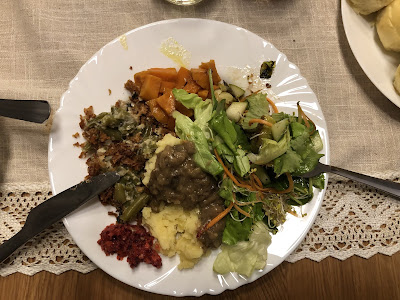 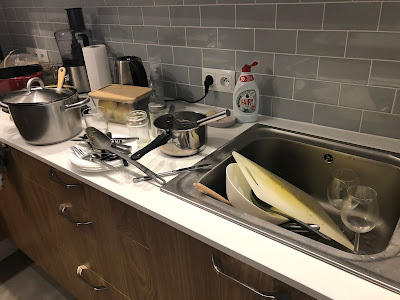 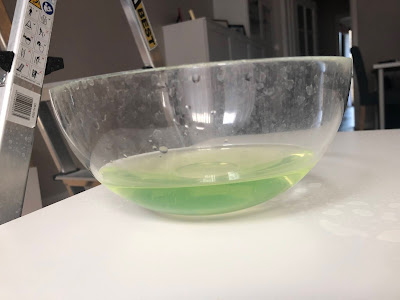 The amount of water that had accumulated overnight from the ceiling leak.