Kudos to the Polish Medical System

To begin, Cameron has approved this post. And to make short of it, neither of us have Covid, but we were worried for a bit. But maybe that's because I'm a mild hypochondriac and will think that every minor ailment is Covid.

It started Thursday night. Cameron did not sleep at all and when he woke up on Friday he wasn't feeling well. As the day progressed his symptoms increased from a light general discomfort to more significant muscle aches and temperature swings. In addition, he felt a persistent and painful need to pee. I did some internet research to see if frequent urination was a Covid symptom. Although the common answer is "no", one study found 7 out of 57 males diagnosed with Covid reported more frequent than normal urination during their illness, which did not provide much relief. We decided to wait one more night before making any medical decisions, but Cameron went another night without sleep and woke up feeling fairly certain he had a UTI.

First thing Saturday morning was to call up Luxmed, our private medical insurance provider. They told Cameron that a doctor would call him at 10am for a phone consultation. While Cameron sat around in the bath I went to the drug store to pick up a thermometer, ibuprofen, vitamin C, cranberry juice, and adult diapers. I thought that at least Cameron might be able to sleep through the night if he could pee in bed. Rossman is not the biggest store and I circled the place three times in my search. I ended up settling on the largest children's diapers I could find (for kids up to 32kg) and some heavy duty menstrual pads. By some miracle, as I pulled out the pads I saw hidden in the back of the shelf some proper adult diapers! By another miracle, Rossman has self check out stations.

By the time I got back home, Cameron had confirmed he was running a fever and his phone consultation had mostly confirmed his UTI suspicions. The doctor promised Cameron an antibiotic prescription and set him up with an appointment for a pee test on Monday to verify. She also recommended picking up some Urosept supplements and two pee cups so that Cameron could have a quicker Monday appointment.

We called Luxmed at 8:30, Cameron had a consultation at 10:00, and I was able to pick up Cameron's meds around 15:00—all I needed was a prescription code that the doctor texted to him and his PESEL (the Polish equivalent to a SSN). I didn't have to go to a particular pharmacy, and other than the PESEL number I didn't have to give any form of ID on Cameron's behalf. It was a good thing I was able to go, too, because Cameron was in too much pain to move much beyond the distance between the toilet and the bedroom.

Between the antibiotics and the confirmation that Cameron was most likely not suffering from Covid, he started to feel better that evening. He even was able to sleep a little—he only woke up five times! If you are curious, he did wear a diaper to bed but elected to get up and use the toilet nonetheless.

Monday's lab results confirmed that Cameron did indeed have a UTI, but that it already was improving after just a few days. It's now been a week, and everything is back to normal. Cameron is still taking some Urosept and I'm still figuring out creative ways to feed him cranberries but the antibiotics are done and his pee schedule is back to normal. I was quit impressed by how efficient everything went. Yes, a UTI is a super common occurrence and the medical attention Cameron received was very impersonal, but it was all settled with very little stress on our part. Plus, the combined cost for the prescription antibiotics, pee cups, and Urosept was only 25 złoty—about six bucks. I'd call that a point in favor of publicly funded health care systems! 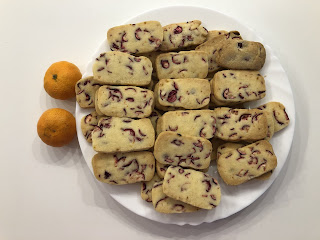 I found a cranberry citrus shortbread cookie recipe as a way to feed Cameron cranberries last weekend. I ended up making a second batch this weekend because I liked them so much. 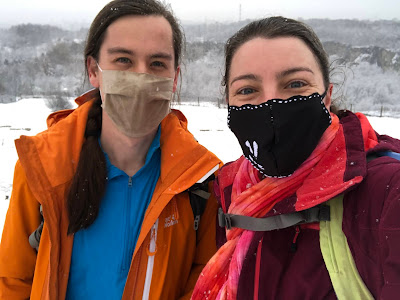 By Sunday Cameron was already feeling well enough to go out for a walk. I'm real pleased because otherwise he would have missed the first snow of the season! 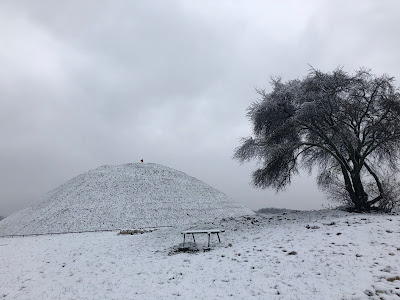 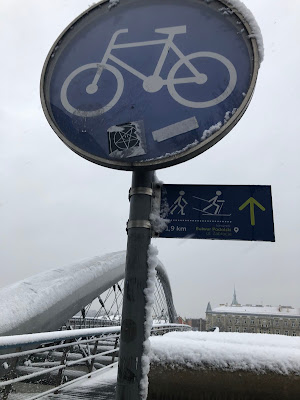 There are a number of Nordic skiing routes marked around town- this was the first time they actually seemed like they might be relevant. 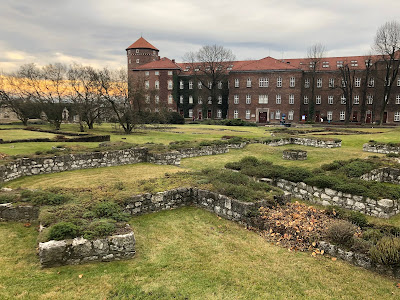 The snow was gone after about two days, and today was actually pretty warm- a high of 12 C. We did a little stroll into the grounds of Wawel Castle. 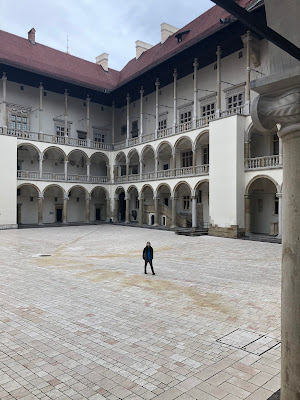 It was strange to be in Wawel- it wasn't that early but it felt like we were the only one's there. 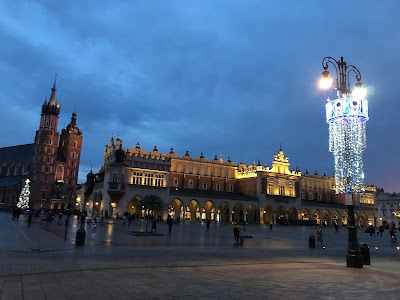 There is no Christmas markets this year, but the city still hung up the holiday lights around town.