Next week will mark the one-year anniversary of the first confirmed Covid case in Poland. Since then we've accumulated 1.6 million total confirmed cases and 43k Covid-related deaths. I've stopped checking in on the daily updates but I often have to search for the restrictions list since they have been in perpetual flux. Unfortunately I haven't found an English website that stays updated, so I often rely on Facebook notifications and periodic emails from the US Embassy.
I'm quite a rule follower, even when the rules don't make complete sense; I like the security of knowing that someone else deemed that what I am doing is safe. That's why I'm ok going to a water aerobics class but am boycotting any restaurant that is open for in-person dining. I know I am a walking contradiction, but this has actually been grinding my gears a little–restaurants are struggling and are keen to reopen, and truly, how is sitting down for a meal any worse than being on the bus sitting across from someone who is not properly wearing a mask, but to intentionally do something blatantly illegal is wild to me!
Restrictions were supposed to lift at the start of February, so many restaurants were preparing for a reopening (they were last allowed to have in-person diners in October), but instead the government announced an extension to the restrictions at that point with no changes to the eating in mandate. Expecting something that gets yanked out from under you is the worst, but some places were not shy about their frustration. Some restaurant owners are finding clever work arounds, such as rebranding themselves as a flower shop, but most are unabashedly defiant. Online you can find maps about places that are open despite the regulations. Apparently, there are so many that the government is having a hard time enforcing the rules and fining the offending businesses.
A few other recent restriction changes were interesting to me and worth noting. Face coverings must now be cloth or medical-type masks, meaning that scarves and visors are no longer considered appropriate. That's fine by me (all of my masks are cloth and I tend to hold my breath when I walk passed someone with just a visor), but Cameron suggested that perhaps my smog mask, since it uses plastic vents, may need to be retired. At least now as the weather is starting to warm up my need for the smog mask is decreasing.
Museums are open again and we have taken advantage of that. We went to two branches of the National Museum, with the big draw being the Leonardo Da Vinci's "Lady with an Ermine." Being in a museum felt surprisingly safe–there were very few other people and they were having everyone filter outside for cleaning sessions every two hours. Hotels are open, too, but most people suspect that they will close again soon. Nonetheless, I asked Cameron to take some time off next month and maybe we will consider taking a long weekend trip within Poland.
Speaking of holidays, I'm unfortunately becoming fairly pessimistic about the potential for international travel. I've pretty much resigned to the fact that we won't be skiing this year, and my hopes to visit Sweden, Georgia, and Ireland are feeling quite far-fetched. I've told my family that they should prepare to stay in the US this summer because I don't anticipate Europe will open up to American travelers this year, especially since vaccine distribution is quite delayed. But, good news is that we have filed out the forms to declare our interest in receiving the vaccine plus I now have my karta pobytu! 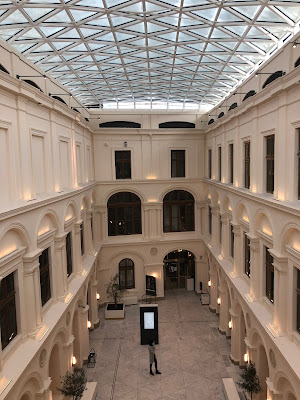 I really appreciate when museums seem grand, but it was extra surprising since this huge atrium existed inside of a building that I had walked past dozens of time without much thought. 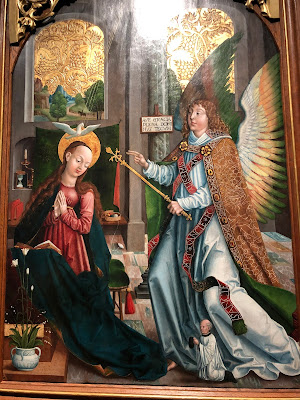 No surprise, a big part of historical art is religious. The little character on the bottom right definitely gave me pause here. 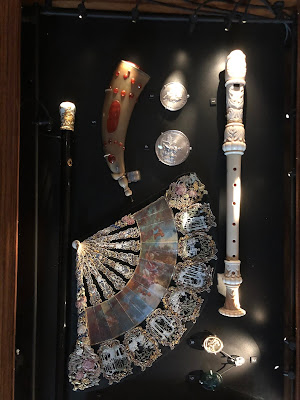 Artifacts from the museum made me want to re-learn to play the recorder. 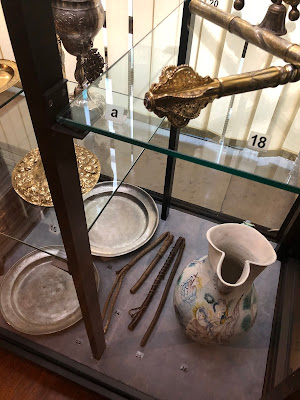 One of the exhibits we saw was for decorative art. It made me think of all the cool things that I love that won't make sense to have during van life. 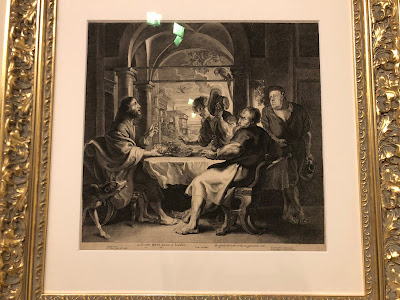 I think this is really interesting. The top photo is a sketch (a little smaller than a standard piece of paper) and the bottom is an larger (probably nearly a meter long) inverted painted version of the sketch. 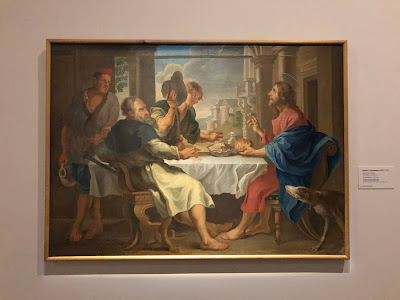 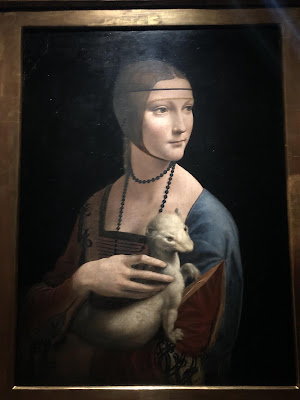 Rightfully upheld as the most skillful piece within the museums we saw. If it appears to be poor quality, I promise it is just my inability to take good photos.
Posted by Aisha at 3:58 AM