Fat Thursday, also called Greasy Thursday or Tłusty Czartek, serves as the main celebratory day before Lent starts in Poland. Effectively, it is doughnut day and everyone goes out of their way to eat a few of the traditional pączki. Pączki are essentially jelly doughnuts. They can be filled with just about anything sweet (Nutella, mixed fruit, pudding...), but traditionally it is a rose jam on the inside, glazed on the outside, and topped with some candied orange peel.

Fat Thursday is Poland's alternative to Shrove Tuesday. More than 100 million doughnuts are consumed in Poland on this day (that's approximately 3 doughnuts per person). Last year when I was working from the office there were stacks of pączki-filled boxes that were an open free-for-all. This year, I expect that people who are mostly working from home right now probably went to their offices to get a few pączki freebees.

The biggest purchase I saw was a pair of nuns heaving around a huge blue IKEA bag filled with boxes that probably contained over 100 pączki, presumably to share with their convent. That being said, I do expect there were more individuals who were supporting their families' personal sweet dough needs this year. Cameron and I definitely had our fair share–four each, plus a fifth on Friday for good measure, but it took some effort. I could have gone into a grocery store or chain bakery to pick up some inferior pączki but I wanted to go to a pączki-specific pączkarnia.

Was it worth it?  I waited in line for over one hour. During that time I did a lot of jumping up and down to stay warm in the -12 degrees cold and I got pooped on by a bird. I was originally going to only get six pączki but after the wait I opted for eight, plus an extra one to give to our doorman. I wonder if the man in front of me had a similar mindset after his wait because he had so many boxes that I wasn't sure if he would be able to carry them all.

I asked for a mix, so they gave us some traditional ones, some chocolate filled, and some raspberry filled ones. The first ones we ate were warm. The dough was light and the sugar melted in your mouth. Number two, a raspberry-filled one, was also pretty good but the texture was not nearly as nice and it was no longer warm. Each doughnut thereafter was a little bit of a struggle to get through but stuffing yourself to discomfort is all part of the fun! Plus, if you don't eat at least one paczek it's bad luck for the rest of the year. Or, as one old Polish proverb warns, "those who don't eat a stack of pączki on Fat Thursday will have an empty barn and their field destroyed by mice." 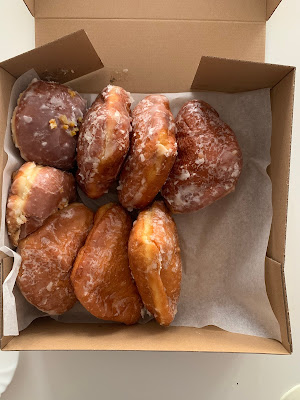 The round one in the top corner is one of the traditional rose-filled ones. The other triangular shapes are less common normally but I think they are probably quicker to make which is why they were prominent on Thursday. 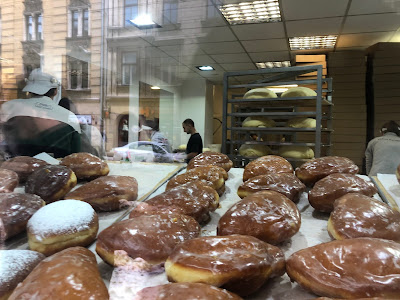 Seeing inside to the baking kitchen was heavenly after waiting in the cold for so long! 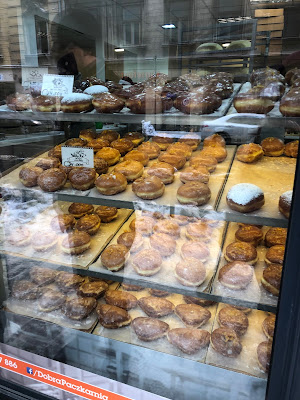 The window display always show a fun variety. Although not considered pączki, it's more and more common to see "American doughnuts" on display. 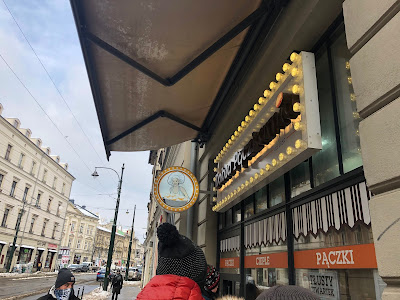 Getting to the point where I could read the Dobra Pączkarnia sign took over 50 minutes. 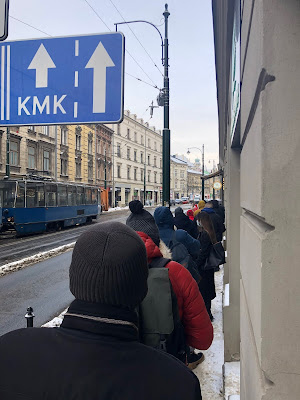 The people bypassing us on the trams were definitely interested in the long lines. A few people gave encouraging waves. 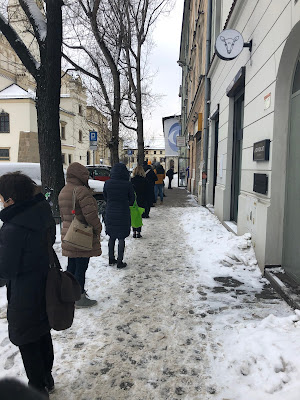 I had options to go to other bakeries closer to home but I wanted to have a variety in my pączki. Plus, even a few of them had their own lines.
Posted by Aisha at 8:40 AM