Cars in Poland are very cute! Most are small, compact, 2- or 4-doors, manual, relatively small engines, and little-to-no frills. To give you a better sense, the top 3 car models registered in Poland in 2020 were Skoda Octavia, Toyota Corolla, and Toyota Yaris (aka Taargüs Taargüs). Every so often you'll find one of the Communism-era vehicles (typically Polski Fiat 126ps, aka Maluch, meaning baby or little one, which were the first affordable and reliable family cars). I could write a whole book (and at least should consider writing a blog post) on the residual impacts of Communism in Poland, but if you want to read a little more into the popular Communism cars of Poland I recommend checking out crazyguides.com. 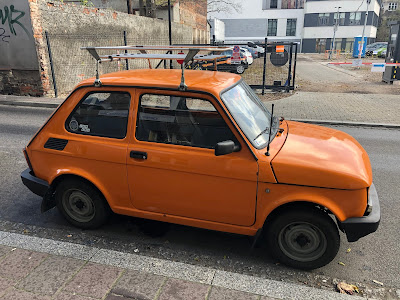 Seriously, look at this little cutie! This is one of the Baby Fiats, plus with an added roof-rack bonus.

To my knowledge, there aren't any Polish car makers, but Poland does contribute significantly to Europe's car manufacturing industry. Fiat, Opel, Volkswagen, Toyota, and many more all have production plants in the country. Even though Toyotas are popular overall, the smaller models are far more common. Our 2.5 liter RAV4 seems like a monster in comparison to our roadside companions and while you can buy a RAV4 here, they only sell the smaller 2.0 liter engine. (It's apparently quite popular to import larger vehicles like ours into Poland and sells hem or a profit here).

It may seem strange to share this post now, over one year since we moved our car to Poland, but I'm noticing this more recently since I now am finally able to drive the car rather than being fully reliant on Cameron. For its first year in Poland, only Cameron could legally drive the car unless we wanted to incur a 30,000 złoty import tax. Honestly, my new driver status is more of a relief for Cameron since he hates driving, but other than heading to a technical vehicle inspection while Cameron was working last week, I haven't made use of my newfound freedom.

Speaking of the technical inspection...it's something we have to do every year and shouldn't be much of a hassle. You bring your car in, pay 90 złoty, and 15 minutes later they are signing off on a piece of paper that says you passed. We didn't expect any issues since we had already gone through the process last year, but of course that was a mistake. Our inspection failed for two reasons: 1) our headlights were still angled in the US manner rather than EU standards, and 2) our license plate was too short...cholera!

Both of these were surprises and which was the most frustrating is a bit of a coin toss. We had paid someone last year to do the full transition to EU standards, and the car passed the inspection last year. I figured it must have just been a simple mistake (maybe the lights had just slipped from the higher angle over the course of the year?) and would be a simple fix. I found an English-speaking mechanic and dropped the car off. I got a call later that day saying that they needed to fully swap our the headlamp hardware and it was going to cost 2,600 złoty! I was expected something like 100-500 złoty...cholera! Well, it had to get done, so we paid. I at least was able to take back the US headlights and hopefully if we move the car back to the US with us it will be a little cheaper.

Next was the license plate. The rules apparently changed on 20 December, 2020 (so only about a month before we took the car in for inspection) stating that if a vehicle could fit a full length license plate then it must have a full length license plate. When Cameron turned over our Washington plates last year they gave him a four-digit Polish license plat since they weren't sure if his car would fit the longer six or eight digit plates. The worst part of this rule change is going to the city offices and dealing with the bureaucracy of making the change. Surprisingly, it wasn't too bad. We went early in the day with the old license plates and our failed inspection report in hand. Although we couldn't quite verbally explain our need, our props carried the message and we now have temporary long plates on our car.

If I had known that the car would continue to be such a hassle, I'm not sure if we would have decided to bring it to Europe. Especially with such limited travel possibilities in the last year, we haven't really been able to use it enough to make up the costs and headaches. Many people, especially in the city, don't have cars. Public transportation is regular and reliable and intercity trains and flights are pretty affordable but even anticipating that we felt attached to our vehicle. We initially said we'd sell our car in Poland, especially knowing there's a market for it, but we're now starting to discuss bringing it back with us. What will be more stressful: dealing with a moving company or dealing with selling the car? 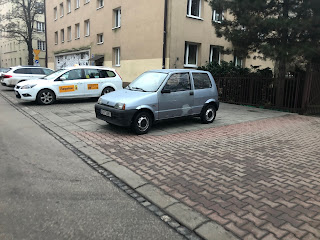 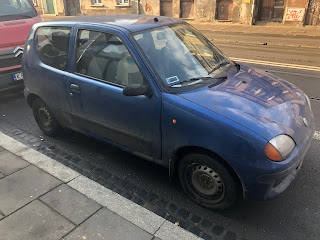 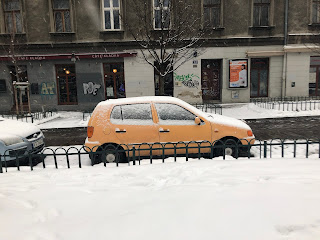 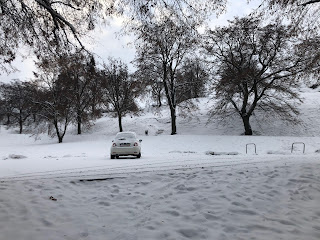 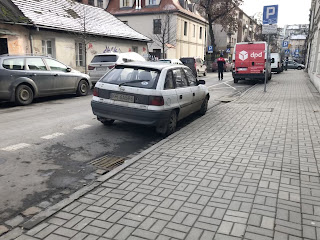 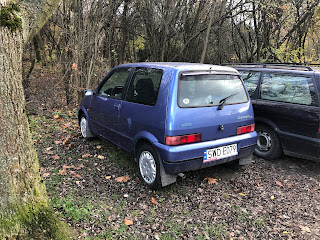 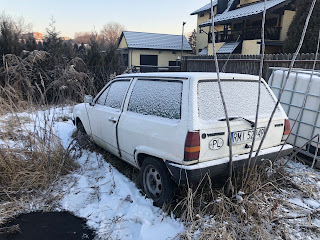 So many cute little cars! 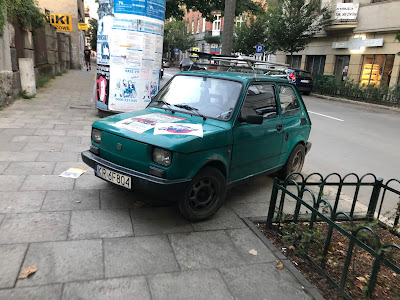 This one is a favorite because it's a tiny, has the roof-rack, looks boxy and rugged, plus it has a killer cool color. 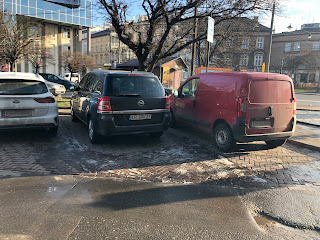 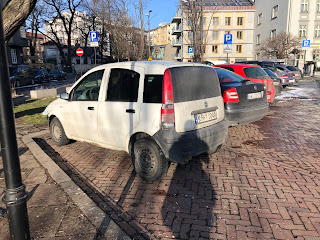 I especially like the mini cargo and transport vans. 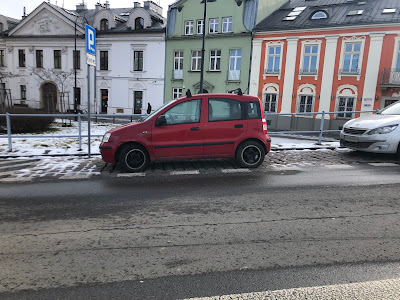 It's not uncommon to see these really compact four-door cars. I mostly like this one because of the pretty Polish architecture in the background. 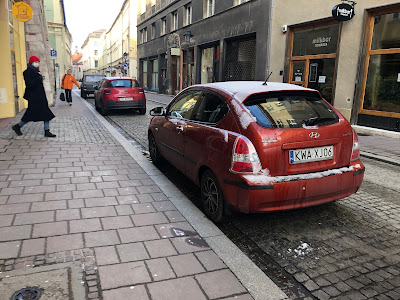 I used to have this car (a little coral-colored Hyundai Accent) when we lived in Seattle. It's the first time I've seen this car in Poland. 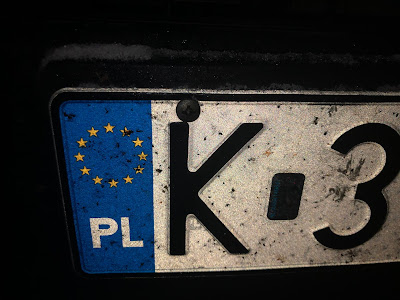 Bye bye (or should I say pa pa) to our mini license plate. The "K" (or more commonly "KR" on the longer license plates) stands for Krakow. In Poland, the license plate stays with the car when you sell it. 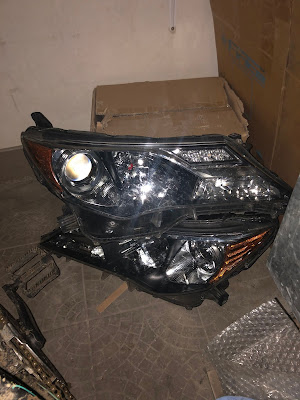 These are the American headlights. They are HUGE. You can see a little bit of my bike in the lower left as a scale.
Posted by Aisha at 12:13 PM