I went into this week excited for my first haircut in Poland, and then the week got even better when I was able to sign up for my first vaccination shot and was able to schedule it for three days later. Cameron and I also made reservations for an anniversary trip at the end of the month that I am really looking forward towards so things just are looking better and better.

To start with the boring stuff, my haircut was great! I felt bad admitting that it had been two years since I'd been in for a trim, especially after they recommended that I come in more often that that. Whoops...can I blame Covid?

Once I arrived I was a little put-off. Some of the stylists were having a smoke out front, and I was told my hairdresser was running late and hadn't arrived yet, and when she did show up her mask was see-through mesh which had a 0% chance of holding back any Covid. She and the front desk attendant walked me over to my chair, and I learned that my stylist didn't speak great English so we had a middle-man translator...huh.

All doubts were relieved during the hair washing. Oh my gosh I never realized how much I enjoy head massages! My stylist recommended using a tool that I had never heard of but she explained that it "cuts your hair like flowers," meaning that it cuts at an angle rather than straight across. Despite the extra cost I agreed, and I loved it. I was able to watch the shop cat and dog wander around while the stylist worked away behind me. She finished it off with the best barrel-comb curls I have ever had. I might be hitting the stage of my life where I am willing to spend more than $25 at a Supercuts for every haircut.

Now onto what you probably are more interested in—Covid shots! Every day for the last two weeks a new batch of younger and younger Polish nationals and residents could register for their vaccines. Cameron and I were eligible on Tuesday. On the government website you could choose a city, hospital, vaccine, and date range, but we quickly discovered that if you wanted anything other than AstraZeneca you either had to go out of town or wait until next month. I decided despite the blood clotting concerns I wanted that first shot quick!

As I write this on Sunday morning, Cameron is at his appointment, but I had mine Friday at 8:10am. I got lucky with a close vaccination point, so I enjoyed a 30 minute morning walk and was thankful for very clear signage pointing everyone to the proper hospital entrance. There was a small line waiting out front, but someone came out of the door at around 8:05 and shouted out "ósma dziesięć" (eight ten) and I raised my hand and was guided inside.

The woman at the check-in counter confirmed my appointment time and handed me a three page information pamphlet then pointed me down the hall to a full-uniformed soldier. He directed me to a table-filled room where everyone was sitting and filling out there forms. Another solider took my papers and translated everything to English for me, then told me where to go into another side room. I assumed that was my vaccination room but ti was just a young doctor verifying that I didn't have any previous medical allergies.

Another string of soldiers led me to the vaccination room, and then the "observation salon." The jab was quick and painless, and within five minutes of being in the waiting room I got a text message notifying me of my next appointment—30 July at 8:15. The whole process was really organized and smooth, and although I'm bummed I have to wait 12 weeks until the next shot I'm super stoked to be on my way!

Now for the after effects. I started feeling a sore arm within five minutes, and as I started my walk home a few of my fingers felt like they were falling asleep. Of course, as a hypochondriac, my first thought was that I have blood clots! But I know that those side effects take a week to set in, which I guess is a relief?

I did arm exercises all day and everything seemed fine. I had dinner plans with two friends and was excited to flex my new partially-vaccinated status. Then, around 19:00 I started to feel a little off; it's very rare for me to decline the last slice of pizza unless I'm stuffed, and I was not stuffed. From 19:00-21:00 I started feeling worse and worse: a headache, an achy soreness all over, and very cold. I was so relieved to get home and go to bed, but I felt so terrible I couldn't sleep. My skin was so sensitive and despite being freezing cold I couldn't stop sweating. To top it all off, I woke up at 5am.

After a bath, a few hours of morning dozing, and an aspirin I started to feel a bit better. The good vibes lasted most of the afternoon, but I started to feel a little off again in the early evening, although that's probably mostly due to lack of sleep and the aspirin wearing off. Two days in, my arm is still sore but I think I'm all back to normal now. 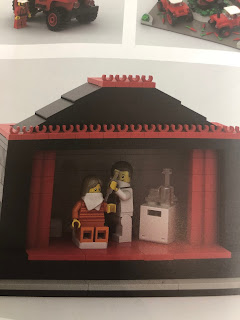 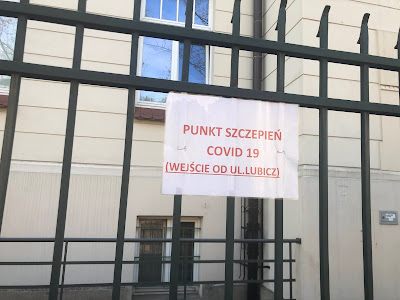 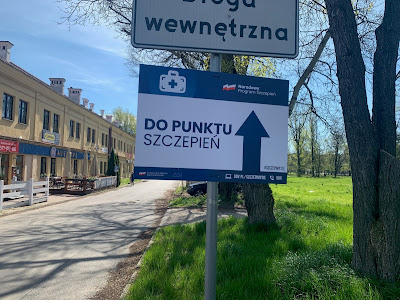 Signs pointing to the vaccination point. 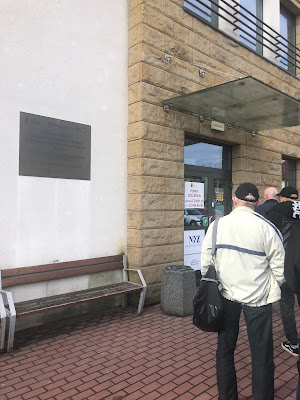 My vaccine took place at one of the local hospitals (shown). Cameron's was at a converted gym. 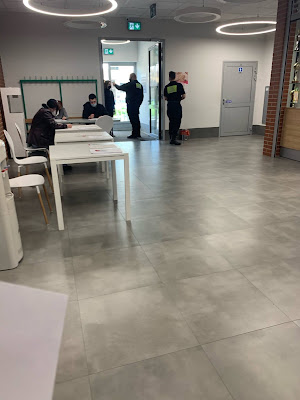 I didn't get any photos of the soldiers managing my vaccination spot, but Cameron's spot had police officers managing all of the internal coordination. 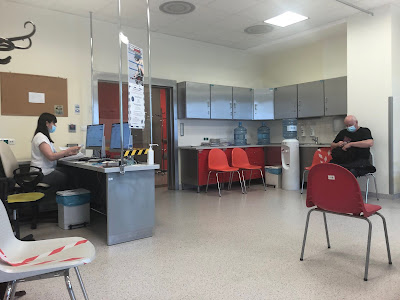 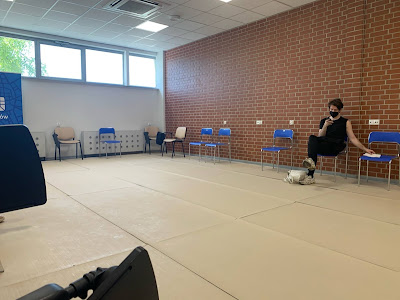 The observation room. Right side was the hospital, left side was Cameron's gym. 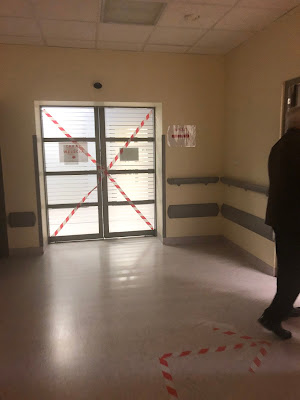 Exiting the hospital was kind of like walking through a daytime haunted house: dark hallways, caution tape over the doors, and dark curtains to create otherwise non-existent hallways.
Posted by Aisha at 3:17 AM