What a treat, what a dream—we can now be outside without masks! Going on my first run without a piece of cloth hindering my breathing was like being suddenly graced with super powers (meaning I was able to go almost 1.5 miles before I had to take my first walking break). We also can eat at outdoor restaurants, which I did with some friends for the first time last night. I was giddy with the invitation to a not-so-secret secret garden to enjoy cocktails and a meal in a semi-covered courtyard.
Suddenly the city is lively again! People circle up on the grassy hillsides along the river whenever the forecast allows it, and many of my friends went out for a big event venue's grand opening tonight. I'm equally caught up in the novelty of it all, somewhat to my surprise, but a concert hall space filled with strangers is still a titch outside of my comfort zone. Plus, tonight is the Eurovision Grand Final!
I had never heard of Eurovision until the Netflix original Eurovision Song Contest: The Story of Fire Saga. I find Will Farrell a little eye-rolley, and the movie was way over the top, but I found myself enjoying it more and more as the two hours waned to a close. That of course led to a rabbit hole of learning about the real Eurovision and various covers of "Jaja Ding Dong," including one by the real 2020 Icelandic Eurovision contestant.
So, story short, I am in love with Daði Freyr, his wife Árný Fjóla, and the full Gagnamagnið band, as demonstrated here. Consider it the spiritual sister video to "Down with the Gown." And, now I'm mildly obsessed with Eurovision.
The two semifinal nights were Tuesday and Thursday this week, and we were able to watch commercial-free live broadcasts on Youtube. I kept a little notebook next to me as we watched to mark down my favorites (Iceland, of course, Russia, and Latvia) and songs that I would enjoy listening to in real life, even though I don't want them to win the contest. I even paid almost 16 złoty to participate, multiple times, in the voting. Sorry Poland, I did not vote for you; you were one of my least favorites of the 32 acts.
Tonight's broadcast starts at 21:00, and in addition to the 20 acts that made it through their respective semifinals, we will see six first-time acts (the band from the host country, the Netherlands, plus the "big five" countries' representatives). Basically, there is a good chance that this will be one of four times I stay up until midnight this year.
I know that I am unreasonably into this contest, but I am the perfect target. I never watched any American song competitions, like "American Idol" or "the Voice," but I love competition shows. I also love over-the-top silliness and sincerity, and Eurovision has both! I assumed that this was going to be the talk of the town, but it seems to be flying under the radar. No one I've talked to has any plans to watch, and very few were even aware that it was going on. Well, maybe watching this won't help me blend in with casual Polish conversations, but it is helping me live my (revised) Polish dream—what a dream, what a treat! 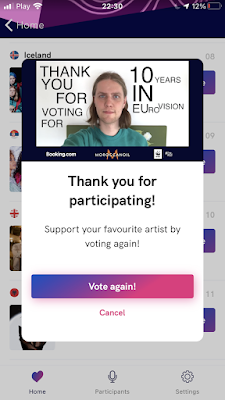 Yes, I voted for my homeboy, Daði, and I probably will again tonight. 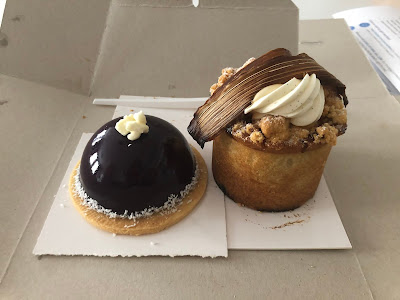 Some treats from my evening out. We didn't want the evening to end so we tacked on another round of drinks plus a dessert run.
Posted by Aisha at 12:02 PM