Cameron is doing another one of his crazy running schedules, which means I'm back to sheepdogging. At this point, Cameron has run practically every trail and road in Krakow, which is why it was such a treat to come across a new area for both of us.

We had never realized it before, but just beyond Park Lotników Polskich (Polish Airmen Park) there is the Polish Aviation Museum. A little further beyond that there are numerous walking trails marked on the map which seem to all head towards a strange rectangular space labeled Lotnisko Rakowice Czyżyny. That became our destination.

I should have connected the dots, because I know lot has to do with flying and airplanes (samalot is an airplane and lotnisko is airport); it was a big (now out-of-use) airplane landing strip. At 450 meters long, this former runway of one of the oldest airports in Poland is still in pretty good condition. Yes, there are cracks in the cement but it would still work pretty well for an emergency landing despite its age. In fact, the Rakowice-Czyżne airfield is one of the oldest in in the world. According to Parki.org, "aviation was only 9 years old when the first airplanes landed [at Rakowice-Czyżne] in 1912."

Big sections of the former military airfield have been reallocated for urbanization purposes (mostly building up Nowa Huta), but what remains has become Lotniczy Park Kulturowy (the Aviation Culture Park). From the main runway, there is a taxiway that connects to a huge field of old airplanes. These are all part of the museum, and are fenced off, but from the park we could see various versions of military planes as well as commercial ones. On the tail of one of the bigger passenger planes, we could see that the symbol for LOT Airlines was virtually the same then as is now: a long-winged crane encased in a circle.

The Museum itself looks pretty big, and I imagine it is quite the playground for the air-enthused. In addition to the large main building and the huge airplane field, there also were a number of plane hangers on-site. I'm not sure if they are doing it now, but I read that you can walk inside some of the old planes, include Pope John Paul II's helicopter. However, I can tell that this museum is not for me purely based on the informative plaques at the front of the building...I really have very little interest in mechanical history of any sort, and especially not if it is war-focused.

Even if the Polish Aviation Museum is not on my Krakow bucket list, I did fully enjoy the park. Other than the aircraft paraphernalia, the park is just plain old pleasant in its own right: great pathways, lots of vegetation, and some concrete ruins (which probably are airplane related). Currently, the park is 30 hectares with plans for the city to accumulate more land for a total of 41 hectares. Future plans for the park are to include theme gardens (not sure what that entails), more historic models, and more playground space. 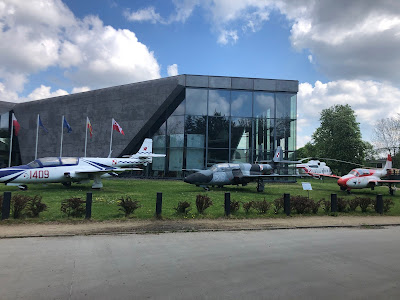 A few antique airplanes outside the museum, each with an informational plaque. 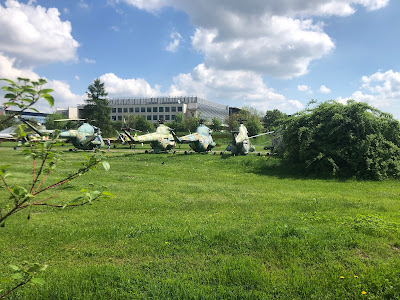 Military helicopters that we could see through the fence surrounding the Museum's grounds. 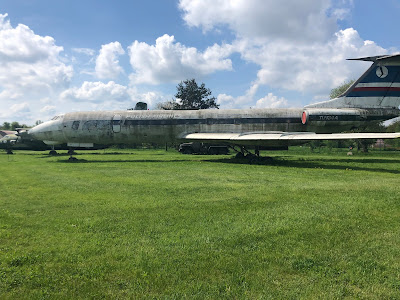 An old LOT airplane. On the tail you can see the still-standing symbol, and on the side of the plane (in white, so it's hard to read) it says "POLISH AIRLINES." 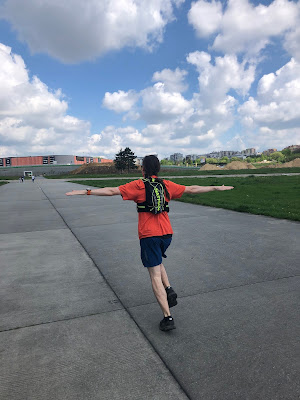 Cameron getting ready for takeoff. This is only the taxiway, not the proper runway. 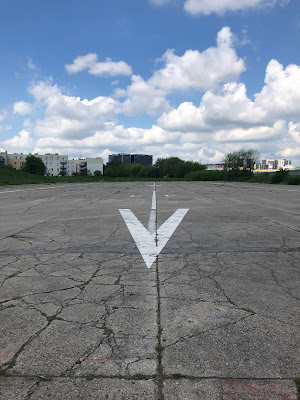 The paint on the runway is still in pretty good condition, which makes me think it has been redone at some point since this was turned into a park (in 1992). 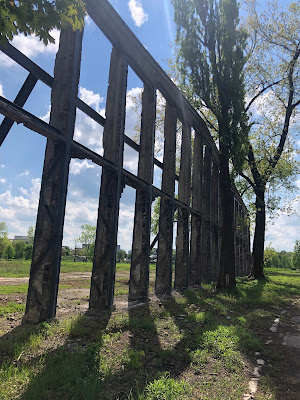 Some of the concrete ruins within the park boundaries. These are the remains from a hangar dating back to 1926. 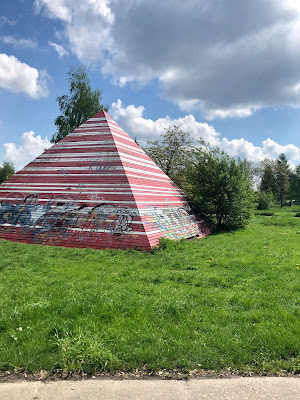 I'm not sure what this pyramid symbolizes, but its fun to see the modern "art" sprinkled in with the historical pieces.