I spent a lot of my childhood thinking about what it would be like to live during unfortunate times. I almost always assumed I would be in the most discriminated-against class–a peasant during medieval times, a child taken away from their family and sold into slavery, an Oliver Twist-esque orphan–you know, kid stuff. Whose to say why; I had a great childhood but for some reason I felt the need to pretend that I didn't. My favorite scenario to play-act was the Holocaust. Maybe it was just top of mind living in Germany, having neighbors who had lived during WWII as children, and learning about concentration camps in school. I also was really fascinated with being Jewish, probably thanks to my Mom's friend, Sue, who was tons of fun and didn't try to force me to eat tomatoes after I told her I didn't like them.

During these scenes, there were almost always elements of escaping through the forest. Cara can probably remember hours of me forcing us to climb up a muddy hill over and over again in our escapes from the orphanage or concentration camps. After a few rounds up and down the hill, I would have us sit quietly, trying to not let our breath make any sound, waiting for the Nazis (or an orphanage warden?) to bypass us. We (almost) always survived.

I had forgotten about these bizarre childhood games until I was complaining about the Coronavirus-related isolation to my mom on the phone. This week Poland increased restrictions and have asked people not to leave their house unless it is for a "life need." Mom's response was to "pretend like you're Anne Frank." This made me wonder, why hadn't I ever modeled my make-believes after her life? She was another kid and I knew enough of her story to be able to play the role well. Plus, I thought of myself as quite an accomplished child actress thanks to my role as Alice Wendlekin in the community theater's production of The Best Christmas Pageant Ever. But, even if I had thought to model myself after her, I don't think Anne would have appealed to me because she mostly just sat bored in a room. The excitement was about the escape! Being told to pretend I was Anne Frank at age nine probably would have brought forward the same groan as it did to me at age 26.

My living quarters are far nicer than what the Franks and Ottos had, and my situation is (hopefully) way more temporary. It's almost silly to even call it a "situation" in comparison to what they lived through because I'm still allowed to talk to everyone I love, eat anything I care to buy or cook, consume whatever media I want, and even leave my house on occasion. We're dealing with fear and the unknown, but I have no right to compare my petty frustrations to those of Holocaust victims. I know Mom's Anne Frank comment was meant to provide optimistic perspective and to remind me that things could be way way worse. I know that, but I also think we are allowed to be grumpy and complain about the new reality we find ourselves in.

Everyone is making adaptations right now. Someone had called into my favorite podcast, TBTL, and said that during these weeks of quarantining everyone becomes a hunk, a chunk, a drunk, a skunk, or a monk. I think I am becoming a nuisance.

Every day I ask Cameron "do you like my outfit?" despite only changing every three days or so. I have to perpetually fight the urge to crawl under the table and jump-scare him when he is on a conference call. To get "exercise" I hop to get to the bathroom and back, and sometimes I throw in a few jumping jacks. When Cameron gets up, he is always asked to give me a massage (but he obliges me max once a day). I find myself breaking out into songs from Girl Scout camp or Christmas carols. I need a haircut, and since I don't trust Cameron or I with that responsibility, I am instead snipping off individual split ends with scissors, nail clippers, or my teeth, depending on what tool is most accessible when I notice the split. I've also started to haphazardly smear essential oils into my hair because a Facebook ad made me think they would make my hair healthier.

All day long, as I work from the dining room table, I look out at the other apartments in our complex and try to build narratives for everyone I see. One woman, probably in her 60s or 70s, comes out other her porch in the late afternoon and jogs in place for a few minutes to enjoy the sunlight. There's another woman in her 40s who does some heartier exercises on her porch for 30+ minute a day. She and her family sometimes go down to the courtyard to kick around a soccer ball for a while. There's a young woman, probably 20s or 30s, who lives to the right of us who sits on a whicker chair smoking and talking on her cell phone multiple times a day. Next to her is a white-haired lady with black sequined curtains who likes to peer out at others, but quickly backs into her house if she thinks she is being spied on. The next floor up is a young couple who will sit on their patio furniture with their cat on occasion. I heard English being spoken from one of the top-floor apartments one day, but I didn't get a good look at the speakers.

I've already shared that I feel overall safer and better looked-after living in Poland than I think I would if I were in the United States, but I so badly wish I could have casual "this is crazy, huh?" conversations with people. One mother was out in the courtyard letting her kids run around for a bit and she was chatting with an older man peering down at her over his porch railing. I got the impression they didn't know each other, but were both just trying to get some fresh air after being cooped up for two long and getting some solace from having a conversation with someone who they didn't live with. Cameron is overall a great person to be isolated with, but even on a good day he's not much of a conversationalist and I so badly envied the spontaneous conversations that I was watching my neighbors have.

Of the five caricatures we all supposedly become, I'm disappointed that I'm most likely turning into a skunk. For me, there's no urgency. I don't feel obligated to change my outfits because I know exactly who I'll see. I don't need to fold my laundry because I know I'll have time to do it tomorrow, or the next day, or the day after that. I can keep hitting snooze because there isn't anything or anyone to wake up for. I think the hardest thing about staying home so much is the lack of surprise and spontaneity that naturally comes from interacting with the outside world. I should be using my indoor time to study Polish so that I can start to have those spontaneous conversations, but I'm just not able to motivate myself to do so.

I promise, I'm doing well. I'm happy, and healthy, and grateful that I have a routine to follow. I'm glad that I have space in my house to do jumping jacks and practice pirouettes. Cameron and I have made lots of new meals in the past few weeks and every few days we have a new batch of homemade bread. I've had time and reason to talk to family and friends who I hadn't spoken with in a few months. Netflix put out Tiger King and 100 Humans. Overall, my life is really good, but there are moments where I want to feel sorry for myself and cry, and I've decided that it's ok to to feel that way. I hope you, dear reader, are also doing well, and if it is good advice for you, just "pretend like you're Anne Frank." 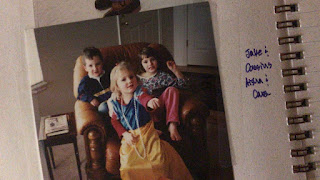 My cousin sent me some childhood photos and we were playing a game of "what's that expression?" We decided that I'm being super sassy, Cara is begging for coins, and Jake is getting close to being fed up with us. 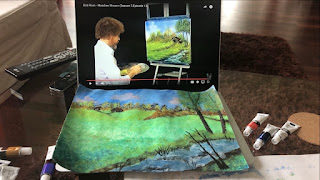 Sunday morning Bob Ross attempt. Cameron told me to not be too hard on myself because it looked "quite reasonable good." 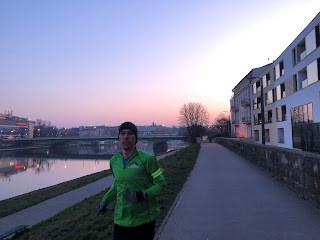 Saturday morning Cameron and I woke up at 4:30 to go for a run/bike ride. We're not 100% positive we're allowed to go outside for exercise but we figured if we woke up before everyone else we wouldn't be causing any trouble. 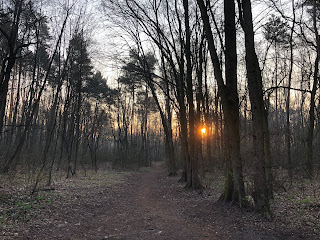 It was really nice to be out in the woods for a little bit on our morning run/bike ride.