Poland's quarantine restrictions have gotten even stricter in the last week. When we go outside, even though we live together, we have to stand 2 meters apart, all parks have been closed down, the number of people inside stores is limited to 3x the number of cash registers, gloves must be worn inside stores, two hours a day have been dedicated as elderly shopping hours, and fines for breaking the rules range from 5,000-30,000PLN. It's not explicitly written that we can't go out to exercise, but it has been verbally requested so Cameron and I are following that rule. I'm writing this on Saturday morning and haven't been outside the house since Tuesday.

Since I haven't had much occasion to get out and experience new things, I will use this week's edition of the blog to go through some of the fun phrases I hear. These have been compiled mostly from my ongoing Toastmaster's meetings and of course my colleague.

Let's start with some Polish words and phrases:


There are also a number of unusual English phrasings that I hear people use often that I find quite charming:
I'm happy to say that I've notice my Polish language skills improving. When I'm in the shower I try to think of what I would say in fictitious situations, and more often than not I can think of enough Polish words to get my point across. Because all of these conversations take place in my own mind, there's a good chance that I'm using a German or Spanish word as a filler and not even realizing it. I know the opposite is starting to become true, and if I try to think of how I would say something in Spanish or German I can now only think of the Polish words. I'll take that trade off, and I hope to continue to pick up on fun Polish words and phrases to share in the future. 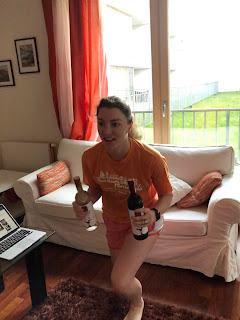 Working out from home, using wine bottles as weights. 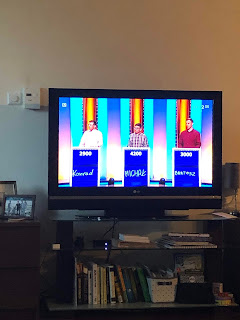 Working from home every day means more TV time. I was watching Va Banque, the Polish version of Jeopardy, while making dinner the other night. 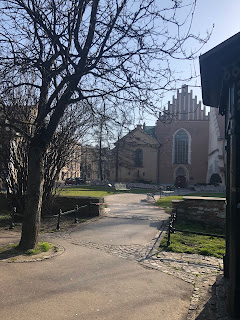 Parks are now off-limits. You can see the red-and-white caution tape blocking off this space. 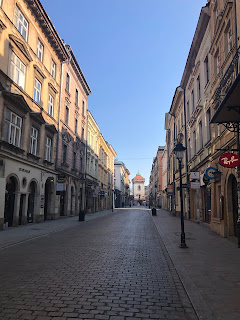 The streets are super empty. I only saw maybe a dozen people in total when I walked 20 minutes to the bigger grocery store this morning. 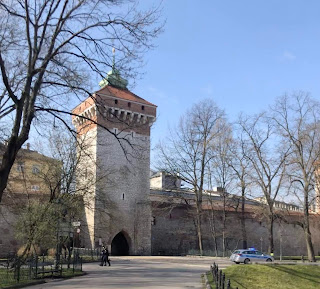 Pretty much the only cars you see are the police. Here you can see two police officers patrolling Planty park and a police car patrolling in the other direction. 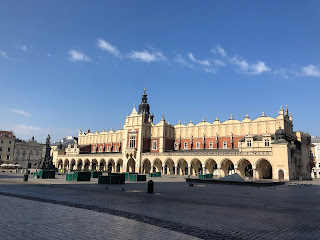 The only other person in the market square was a guy in a neon-yellow work vest taking drone footage of Old Town. Drone's aren't allowed in the city so I think he was on official government business.