Sorry for last week's post–looking back I was experiencing some cabin fever-onset depression. Compared to last week, I feel so happy and and motivated. Starting last Monday, we can now go back outside for exercise and I have been going on daily walks. Parks and forests are open and I'm taking full advantage of our restored freedom.

Whereas I had been going out for weekly trips to the grocery store, Cameron truly hadn't left the apartment in over a month. To celebrate, we wrapped buffs around of faces on Monday morning and set off on a 3,5km stroll around Planty Park. It was so beautiful! Clearly, the city has still been employing their gardeners because the park was full of beautiful manicured lawns and landscaped floral arrangements. The Polish word for April, kwiecień, is aptly derived from the same root word for flower, kwiat, and there were daffodils, tulips, and pansies in abundance.

There weren't many people out, but it was still a bigger crowed than I had seen in weeks. I wanted to watch other people and try to get a sense of how they were doing; did the first day out feel as monuments to them as it did to me? I felt giddy to be back in the physical world, even though we were all keeping our distance and everyone had their lower faces covered. Cameron kept repeating how surprised to see the changes that had been happening in the outside world. Since he last has seen them, the trees went from barren winter branches to lush billows of greens and pinks. He so badly wanted to wanted to share this, so he ended up video chatting my dad as we walked our loop.

On subsequent evenings' walks we've walk by the castle and along the river, both of which are quite crowded and hard to keep to the 2 meter distancing in places. A few people, especially those sunning on benches or or grassy hills, are not following the mask regulations fully, but instead have them hanging around their necks ready to be quickly pulled up if a police officer walks by. The police are still out on patrol, and I always have a small hope that those who are disrespecting the rules will be fined. Being by the river is lovely in spring, of course, since the grass is growing more brightly and the cherry blossoms are in bloom. If it's late enough in the evening we see bats flying around catching their dusk bugs. Normally I would be more concerned with getting ready for bed at 20:00 rather than going out for a walk, but the walks are a newfound must-have each day.

Walking around Krakow with a more autonomy has been great, but today was a real treat to take the car and drive an hour south for a short hike in the forested foothills of Małapolska. Some of the early wildflowers were out and the lower trees were budding with their young green leaves. You don't have to wear masks while in the forests, but about half of the people we bypassed had something around their necks that they could pull up when passing fellow hikers. Luckily we had mostly sun on our hike, but springtime weather here is notoriously unpredictable and not long after we reached the car it started to pour. If it weren't for the clouds, we probably would have seen the Tatras Mountains, but even our shorter-range view of the Polish countryside was spectacular.

If you want to visit Poland next year (and are optimistic that we won't have a second wave of Coronavirus) I very much recommend visiting in spring! 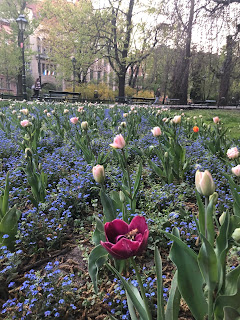 Just a few minutes walk from our house. 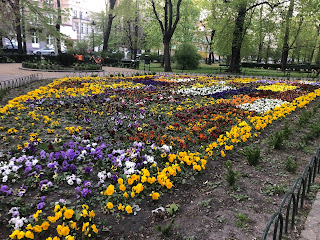 Some of the landscaping surrounding old town. 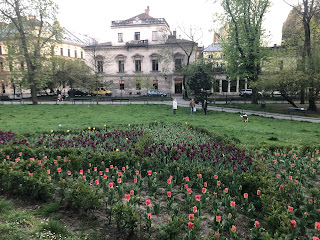 Families and dogs were enjoying their evening. 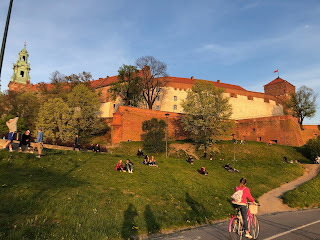 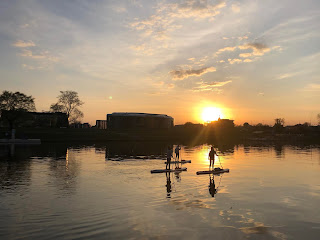 Paddle boarders along the Wisła river. 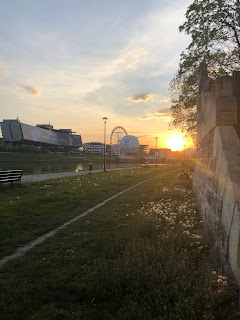 Sunset stroll along the rive. 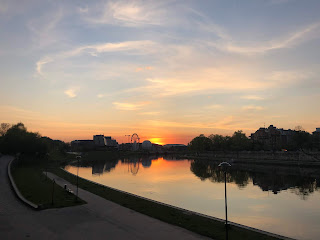 Sunset on the Wisła. 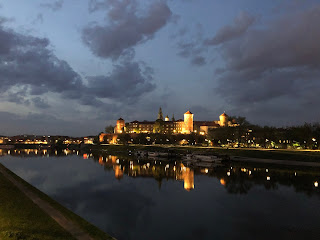 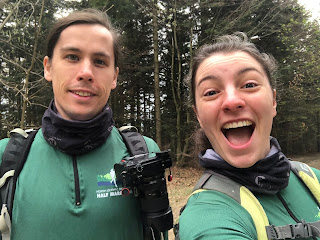 Twinning on our hike with matching shirts and buffs. 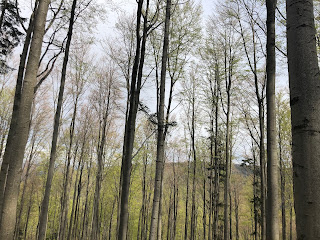 Budding trees in the forrest. 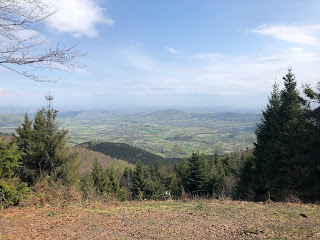 A sunny view of the Polish countryside. 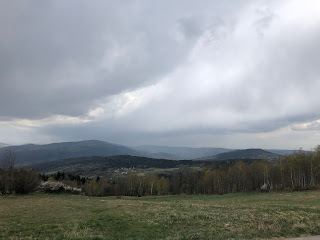