I wanted to get out of the house and explore Poland a little (ha- little!), so we packed up the car with a hoard of snacks, my bike, and of course our face masks for a sheep-dogging adventure. We elected a large green space on Google Maps about 3.5 hours north of Krakow. The drive up was through lovely rolling hills of agricultural fields and wind farms. There were huge patches of bright yellow flowers, which I later learned were rapeseed crop. There were some surprise tolls, but they were easy to navigate and quick to get through. That may have been an artifact of the continuing recommendations to stay-at-home, but the tolling facilities seemed prepared to handle big intakes of drivers.

When we arrived at the park, we parked near a large pond surrounded by long marshy grasses. There were swans in the pond being shooed away by a fisherman and the loud squawk of other smaller birds and bugs. Cameron needed to do a two hour run, which took us down about 20km of trail and road. We were mostly in-and-out of quick-growing pine forests with some vibrant green underbrush. It smelled fresh and when the sun shined it was fairly warm and really pretty. There were a few other people out, but we had the logging roads mostly to ourselves. The park was nice but probably not worth driving multiple hours outside of the city for.

The real excitement was the drive home. There was a lot of construction on the southbound highway which hadn't been as prevalent when driving north. Polish roads already have a lot of fluctuation, but going through construction zones are the worst, so even though the speed limit drops to 60kph, most people keep driving 80-100. The whole drive Cameron had been carefully sticking with the speed of traffic, and even often driving much slower than the other drivers to stay within 10kph of the speed limit. Unfortunately, in a moment of bad timing Cameron was caught driving 87 in a 60 zone.

We could see the police officer standing on the side of the highway up ahead holding out his radar gun. He was not trying to hide: he was clad in neon and the police car's lights were flashing. Cameron slowed down, but not quickly enough and as we got closer the police officer stepped into the road and waved Cameron off to the side with his reflective wand.

The interaction started as expected: the office came up to the driver's side of the car, Cameron rolled down the window, they took Cameron's driver's license and registration, and explained the violation. Of course this is all going on in a weird mix of Polish, English, and gestures. The officer told us it would cost 100PLN, and he told Cameron to grab a jacket. Confused, Cameron thought the officer wanted to check to make sure we had the mandatory reflective vests, but no, he was asking Cameron to get out of the car so he could pay the charges.

I waited in the car, and while Cameron was paying his ticket the second police officer went back to the radar and immediately pulled over another car. I watched as the same string of events unravelled for that driver: he talked to the police officer through his car window, grabbed his wallet and jacket from the trunk, and then walked over to the police car to pay his fine.

From my distanced position I could hear small snippets of information being shared. Cameron spelled out his father's name, and then said that he worked as a software engineer. I wasn't sure if these were trackable pieces of info or just casual conversation. Cameron later shared that the officer did write down a lot of information across multiple systems, but there was some confusion since most of the conversation was happening with the assistance of Google Translate.

Cameron had been shaking with adrenaline when he first left the car, but he was pretty calm and in surprisingly good spirits when he returned about 10 minutes later. The whole translation was pretty casual compared to any interaction with cops in the United States. Cameron shared that the officers were trying to make him more comfortable and there wasn't any intimidation games going on. Just the fact that they have you, the driver, leave your car is indicative of a very different vibe than the US.

Based on what I've seen, I get the sense that cops are not all that scary. People get fined more often, but they typically aren't that much (100PLN is the equivalent of about 25USD) and I don't think a ticket sticks on your record. For example, people illegally drink in public fairly regularly; if you want to have a picnic, you're going to have a beer, too. Chances are you're going to get fined eventually, but it's just part of the cost of having a nice meal in the park.  It goes back to the overall practicality of people, and most people are willing to pay a little bit to be able to enjoy themselves a little more.

It was not an ideal end of the day, but it also was not as bad as we thought it would be. Hopefully this means that Cameron will start loosening up a little and be a little less anxious for the next road trip. 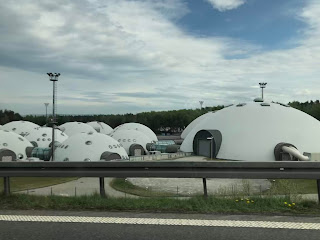 Not sure what these were, but we passed these hamster-home like buildings on the drive up. 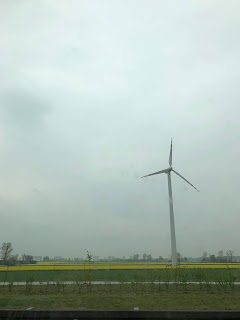 Not a great picture because it was raining at this point, but you can see the yellow fields of rapeseed among the windmills. 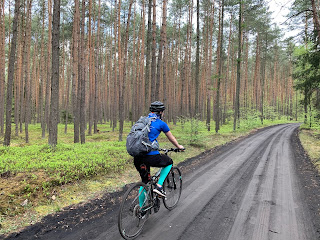 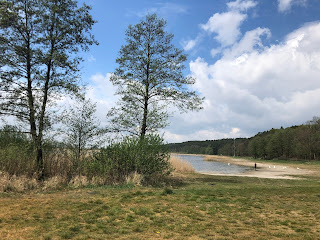 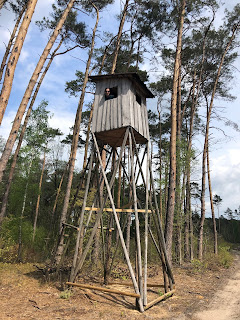 Cameron peeking out of a lookout. 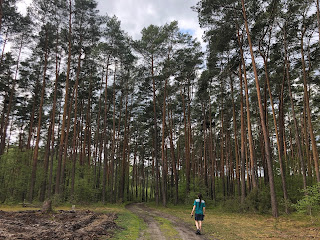 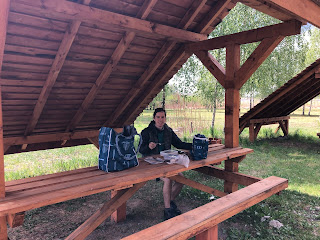 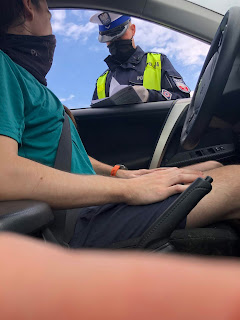 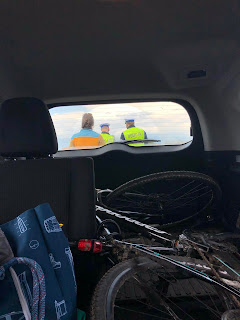 More sneak-peaks of the pull-over. 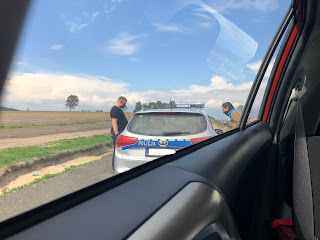 Cameron and the other unfortunate driver both paying their fines.