Before moving here, I hadn’t done much vacation planning. Most of our holidays were backpacking related, which fall under Cameron’s expertise, or we were visiting people we knew, so we could rely on our hosts to create our itinerary. The first Cameron-and-Aisha non-backpacking solo trip was our Honeymoon to Iceland, almost exactly one year ago. In that case, we elected to pay a travel agency to plan our trip for us and very little of the traveling stresses fell on our hands.

During my months as a housewife, one of my self-assigned “jobs” was to plan vacations for us.  I came up with lists of places to show people when they visited Krakow, we had our Slovakian ski trip, and I had done some preemptive planning for my family’s summer vacation to Croatia and my friend’s visit to London. Well, given Coronavirus restrictions my pre-planning may have been for naught, and now I am left scrambling to make vacation plans while working a full time job.

Poland made the decision last week to expand the boarder restrictions through June 12, officially putting an end to my parent’s optimism that their June 2 flights were going to run. I’m still hopeful my friends’ trips in late July and mid September won’t get canceled, but with each cancellation Cameron and I are left with booked vacation time and no plans to fill them with. As previously mentioned, we were supposed to spend a week in Croatia with my parents in June. There was some hope that Cameron and I might be able to travel within Europe, but the current map of allowable boarder crossing is a huge miss-mash as you cross the continent. Some countries are experimenting with allowing tourism now or will start in early summer, others have preemptively decided to disallow travel until at least November. Croatia is one of the more restrictive countries; they currently don’t allow any travelers but they are “considering” allowing Czech tourists in late summer.

So alas, Aisha and Cameron’s hopes of a solo trip to the Croatian coast were cut off. Now we are left with a week-long period and in need of a plan. Cameron is much more of a home-body than I realized, and would have been perfectly fine with a week at home coding (but it would be for fun, not for work, which would make it feel like a vacation). The prospect of that makes me want to lose my mind, so last weekend was dedicated to vacation planning.

Having the Poland-only restriction is good for someone like me, who has a hard time making decisions. Unfortunately, when you Google “places to vacation for a week in Poland” most of the results are either: a) road trips going around the country with recommendations of where to stay 1-2 nights at a time, b) recommendations to visit Krakow, or c) very clearly for activities that will not be accessible right now. Coronavirus restrictions are quite impeding, and in somewhat unexpected ways. In addition to the closures, there’s definitely extra anxiety–we know we are allowed to be outside of our house, but there a layer of guilt built into it now. It’s not helped by the fact that we are the only non-Polish tourists anywhere we go. I self-consciously wonder if people are suspicious that I broke the law to get here, and there is no hiding behind the “stupid American tourist” facade that I sometimes take comfort in.

We’ve experience this in our two long-weekend trips during Coronavirus. The first was an Airbnb stay in the town of Gdansk along the Baltic Sea in Northern Poland. The second was this weekend; we spent two nights in Castle Czocha, close to the intersection of Poland, Czechia, and Germany to celebrate our one-year anniversary. Actually, a short tangent–this weekend after saying I couldn’t understand a man speaking Polish, he repeated the question in German and I was able to help him out!

What has been nice about both of these weekend trips is the lack of other tourists. We are getting to experience some of the major tourist-heavy spots without having to contend with crowds and lines and traffic. Of course now if anyone I don’t know brushes against me a bolt of health concerns makes me go ridged for a second as I try to seer a reminder into my brain to not touch that part of my clothes until it can be disinfected. Also, I immediately assume someone is selfish and pretentious if they forget to pull their mask up from their neck when they pass by me.

Overall, the rules are just fundamentally changed; you can’t rely on your former knowledge about travel. For example, up until a few weeks ago you weren’t allowed to stay in hotels but we weren’t sure if Airbnb rentals were okay. And then, if you did stay in an Airbnb nowhere would be open for breakfast and Ubereats wasn’t likely going to have breakfast delivery options. This weekend in a hotel, we were given a card to fill out our breakfast preferences since buffets are not allowed. The card was in Polish, but Google Translator led us to believe that our selected breakfast choices would be delivered at 8am the next day. Well 8am passed, and then 9am before I finally walked downstairs to find out that we were supposed to be eating in the hotel restaurant.

All of these little concerns and unknowns take away the fun out of traveling, but then again, maybe planning trips is always this stressful and I’ve just never had to deal with it before. It’s exceptionally disappointing having spent hours of research crafting what I hope will be the perfect relaxing/romantic/exciting/unique/fun holiday and it not go perfectly. The next trip we have planned is our replacement for Croatia. Since it was just going to be the two of us, we decided to have a true Cameron and Aisha adventure–backpacking.

Well, it turns out wilderness camping is illegal in Poland. If you want to string along a few nights in the mountains, the best way to do it is to hike up to a mountain hut, which is essentially just a large hostel that can’t be easily accessed by car. Unfortunately, these typically have to be booked a year in advanced, but I thought that we might have a chance booking relatively last-minute thinking that lots of people would have had to cancel their summer plans. It’s true, many people did have to cancel their summer “trekking” plans because most of the huts are closed or have converted their hostel rooms into two-person only rooms and now are doing first come-first serve walk-in reservations.

Now you many be thinking, that it would be a super bummer to hike all day only to be turned away, but honestly most of these huts are only a one- or two-hour hike away from the closest parking lot, so staying in them doesn’t really give you much of a head-start on your following day’s hike. Regardless, we decided this year was not going to be a backpacking year.

Instead, we’ve decided on a 7-day kayaking trip in Poland’s northeastern lake region, Masuria. Again, it took many hours of research and emailing tour companies to see if it was even a possibility this year. My preference would have been to join a group tour (to avoid the stress of planning in ourselves), but as you can imagine group activities are frowned upon right now. Instead, we have a plan to rent a two-person kayak and camp along the Krutynia River Trail. I have been assured that we do not have to reserve camping spots and there there will be plenty of food for purchase along the way. I get the sense that outdoor adventure in Poland is a lot more facilitated.

I don’t mean to sound negative, but I am quite worried that based on the anxiety of our weekend trips, our week-long journey to the unknown might be more hassle than it’s worth. I even asked Cameron this morning “will our kayaking trip be worth it?” It’s not going to have any of the adventure thrills Cameron got used to as a raft guide, plus he hates driving but he’ll have to be behind the wheel for six hours each way. His response was “I hope so.” I hope so, too. 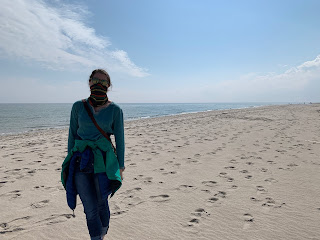 The Baltic Sea, along the Hil Peninsula during our trip to Gdansk. 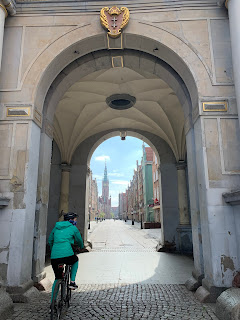 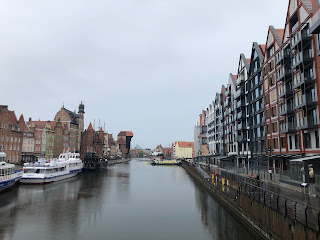 One of the channels in Gdansk that drain to the Baltic Sea, historically making it a major port city. 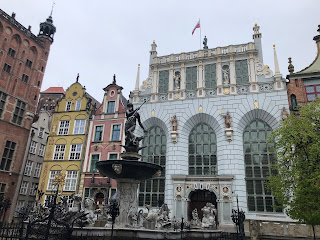 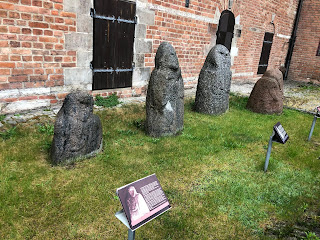 Four of the region's "Old Prussian Hags" dating back to at least the 1700s. 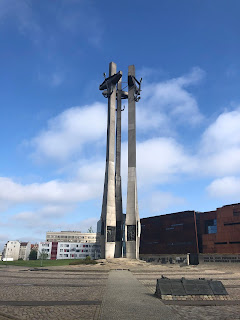 Monument to the Fallen Shipyard Workers. 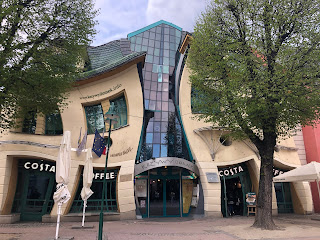 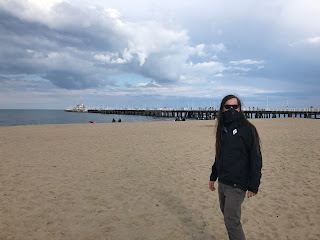 Visiting the main beach in Sopot, about 20 minutes from Gdansk. You can see the longest pier in Europe behind Cameron. 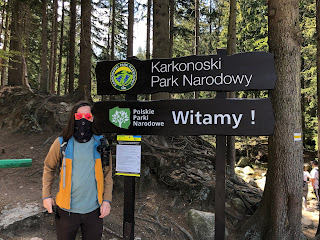 A stop at one of Poland's National Parks on our way to Castle Czocha. 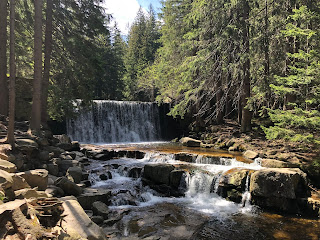 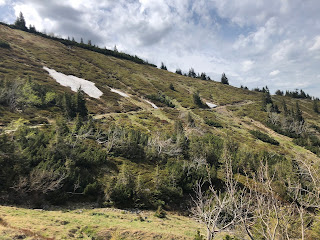 My first alpine hiking since arriving in Poland. 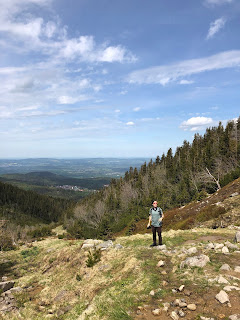 A view down into the town/valley from the top of our hike. 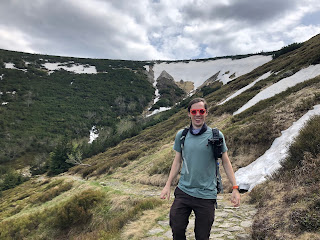 Cameron just landed a snowball at me, which is why he looks so chuffed. 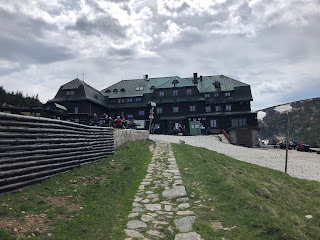 A mountain hut, similar to what I was describing. It took us about 1 hour to hike here. Even though they aren't housing guests like a normal year hikers could still order some comfort food and beer. 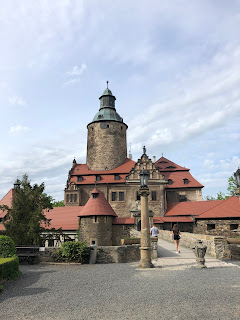 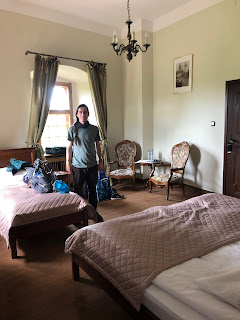 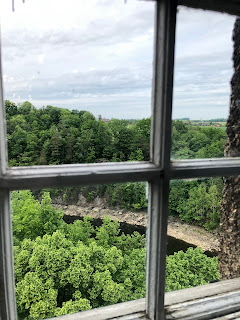 View of the lake from our bedroom, Jezioro Leśniańskie. 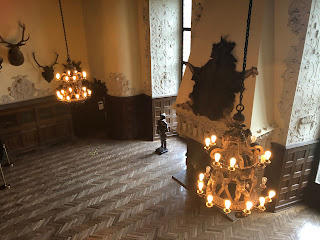 One of the grander interior castle rooms. 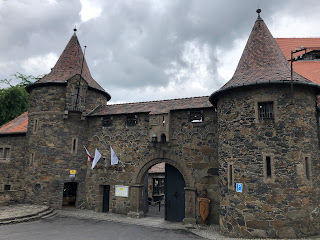 Gates that you have to drive through to get into the castle grounds. 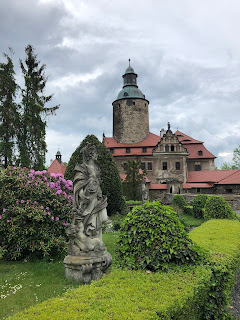 As you would hope, there were some ornate statues and gardens around the castle. 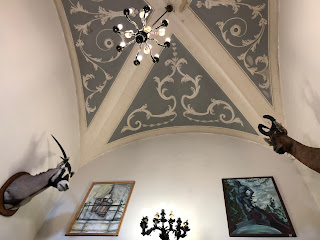 At the top of one of the castle stairwells.
Posted by Aisha at 8:06 AM