Thanks to my new job, I got to visit Warsaw. This was my first visit to another Polish city, and I was excited for the train ride and anticipation of learning more about my new country. There were three elements to the trip for me, so I'll divide up my blog in the same way:

In my mind, riding the train between two European cities was the epitome of class and luxury. Perhaps I was anticipating the means of travel more than I was looking forward to the destination. Especially as a solo traveler, this seemed the ideal way to go.

I knew there was no need to be, but I was a little nervous about the pre-boarding process. I had traveled with Amtrak once in college, and I have been regularly taking the street cars around Krakow, but I hadn't been on a proper European train since childhood. I asked Cameron to walk to the train station with me, but his moral support was completely unnecessary. As should be expected with European travel finding my train, the correct car, and the correct seat were problem-free. And of course, the train left exactly on time.

I had booked my ticket through a third-party service, and I think I was in first-class but I'm not sure. There wasn't anything particularly elite; there wasn't even outlets. It was a six-person cabin, with a small trash bin and some small tables. Above the seats was a long mirror that you couldn't look while seated and everyone's bags and luggage were stored on small metal wracks above that.

Almost immediately, the cityscape turned into hilly pastures and leafless trees. There were regular smatterings of houses and closer to Warsaw we passed through short space forests. Even though it was just a three hour journey, the scenery became mundane and the slightest disruptions became of great interest: the conductor, the coffee cart, and seeing two white-tailed deer running across a distant field. I went to the toilet just to walk along the car. All of my fellow passengers were women. Three of them seemed to know each other, but my limited Polish kept me from eavesdropping on their chatter.

Essentially, the train was not nearly as high-class or high-entertainment that I had worked it out to be.

I arrived in Warsaw at 13:30, and would have likely found a lunch spot had I not had a 30 minute walk to Sigismund's Column for my scheduled walking tour. I purposely packed everything into a backpack rather than a suitcase purposely so I could rush out of the train station towards Old Town Warsaw. Along the way I walked through a few parks and plenty of people were strolling through them enjoying the surprisingly sunny day.

My waking tour did not start as promptly as the train, but I enjoyed watching a street performer release bubbles into the air to the enjoyment of children and adults alike. Once the tour began, I learned about the namesake of Sigismund's Column, a Polish/Swedish king who moved the Polish capital from Krakow to Warsaw so he could more easily rule both countries. From the same square we could also see one of the only buildings in Old Town that withstood the bombings of WWII and then the National Stadium which was constructed for a soccer tournament in 2012.

The remained of the tour was through a series of streets that had been reconstructed to their pre-war state. We passed through the palace, and in front of the large Gothic church. We walked through the Barbican and the fortified walls that still surround the original city. Since Warsaw hadn't begun as a major city, Old Town was small and charming, but some of the charm felt manufactured due to the reconstructed nature of the city.

The tour guide was entertaining, and he very much enjoyed lightly ribbing Krakow (a sentiment that was paralleled by my Krakowian tour guides on previous walking tours). I actually found a lot of similarities between the two cities, especially as far as (original) layouts and architecture. Warsaw has more to offer as far as major performers, and I'm looking forward to exploring more of the city's parks in future trips. I got the sense that Warsaw emphasizes integrating nature into the city, and our guide told us that it's not unusual to encounter a beaver along the banks of the Vistula River. I think I would have been quite happy to move to Warsaw, had that been the destination chosen for us.

That being said, I'm glad Krakow made the final cut. Krakow has a cohesiveness that Warsaw lacks, and a stronger sense of culture and community. This is in part due to Krakow's preservation during WWII, but also largely due to it being the city of kings, even after it was no longer the government's capital. Even my tour guide admitted that Krakow is the cultural hub of the country, albeit saying so in a manner that implied that Krakowians were hoity-toity for that reason. Before leaving work last Friday, I asked my Krakowian coworkers if they had any recommendations for me in Warsaw, and the only answer I got was "those of us from Krakow don't think very highly of Warsaw." Although I found plenty of things to entertain myself with, I think that Krakowians may be justified in their elitism.

Work was the reason I was in Warsaw, so I suppose I should address that aspect of the trip as well, especially since there were some fairly amusing components of it (at least for me).

I knew ahead of time that the Novotel was a fairly nice place to stay, partially because what I had seen online, but also because it was a very tall modern-looking skyscraper in the hub of New Town. When I checked in, I considered asking the hotel receptionist if my roommate had already arrived. I didn't, though, which led to some added anticipation when I first unlocked the door to my room. I was alone, and I quickly discovered that there was just a single bed; somehow I had lucked out to have a room to myself!

The view from my room was of the spectacular Palace of Culture and Science, the tallest building in Poland. The gym, which was on the top floor, had an even better view of the same cityscape. Breakfast the next morning was also a delight. I made myself a fresh pressed carrot, apple, and pear juice (yes, they had juicers that the guests could use), potatoes, eggs, pastries, herring, a salad, and I paired my croissant with a chunk of honey comb. I was tempted to also try the fresh-churned butter machine, but it would have just gone to waste.

When I signed into the training session, I was told that the session would be conducted in Polish, however there was a translator for me and the one other English-only participant. Because of that, the two of us were seated in the back of the room at a table to ourselves. It took me a while to get used to concentrating on the whispered voice directed at the back of my head, rather than fully focusing on the speakers. Unfortunately, because of the setup, the two of us missed out on much of the socialization and team building activities that the other participants were involved in. On the bright side though, I got to leave two hours early and caught an earlier train home to Krakow that evening!

The other notable part of training was the VR headsets. In Poland, there are serious precautions taken to make sure everyone is well versed in health and safety laws. In the case of a health situation, individuals are expected to provide fairly involved medical support until health professionals arrive on the scene. At some point during the morning, each of us were batched into groups to put on VR headsets and walk through three health-scare situations: a child who cut his finger, someone who had a heart attack and collapsed in the lobby at work, and then someone choking on a grape. If you didn't follow the exact steps (ex: put gloves on before applying antiseptic cream and a bandaid) then you didn't earn the trophy for that scene. At one point everyone in the room was shouting "put on gloves" and "grab the AED" as part of their scenarios. 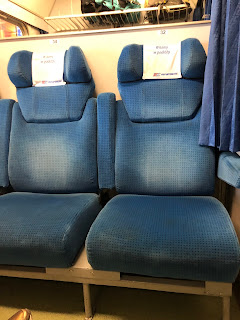 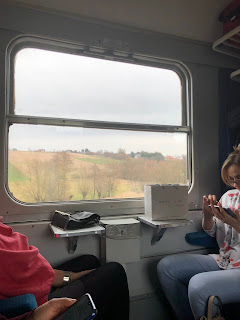 Views from the train were mostly of hilly pastures. 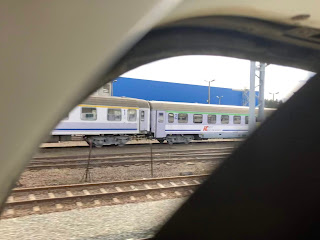 Looking out at another passing train. 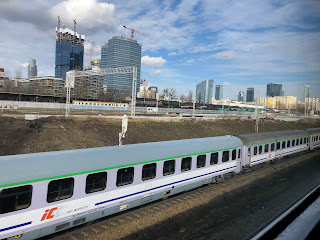 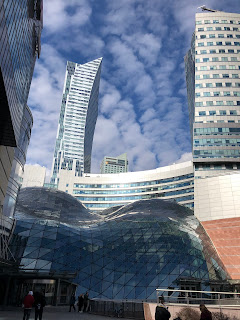 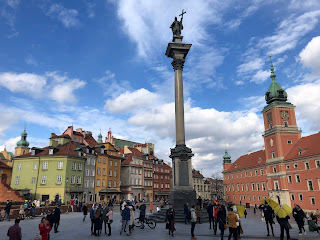 The colorful homes of Old Town on the right, Sigismund's Column in the center, and the Warsaw palace on the right. 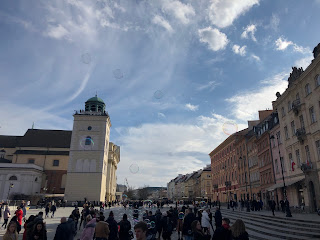 Bubbles flying through the air while looking at the still-standing abbey. 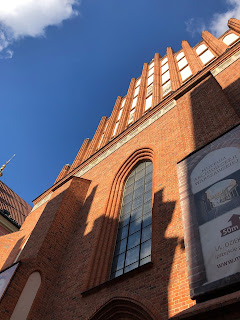 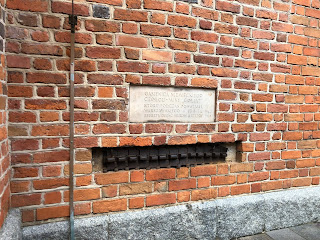 Some tank tracks on the cathedral as an anti-war memorial. 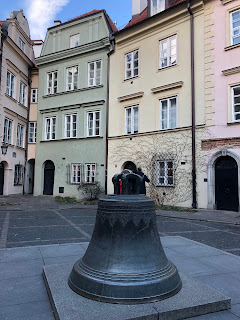 If you walk around this bell every day, your wish will apparently come true. More notably, there is a tiny one-window-wide home in the left corner. The back of the house is much wider but at one point property tax was determined based on the width of the front of your house. 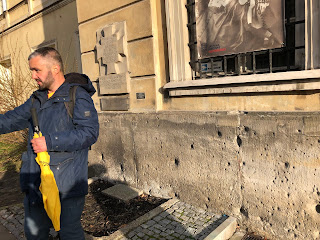 My tour guide in front of a wall with bullet damage from former public executions. 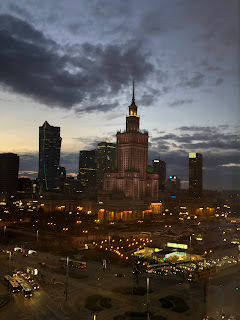 View of the Palace of Culture and Science from my hotel room in the evening. 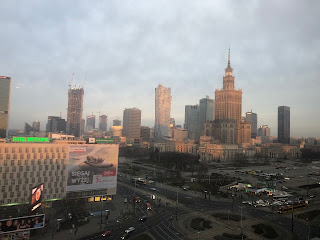 And the same view the next morning. 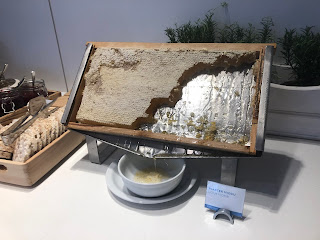 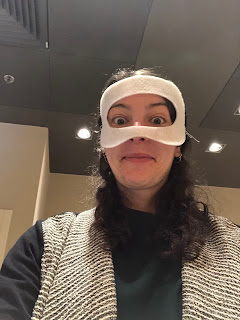 Sanitary mask to wear under the VR headsets. 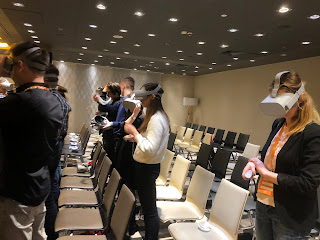 Everyone doing their VR health training. 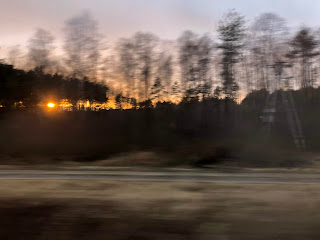 Sunset from the train ride home.